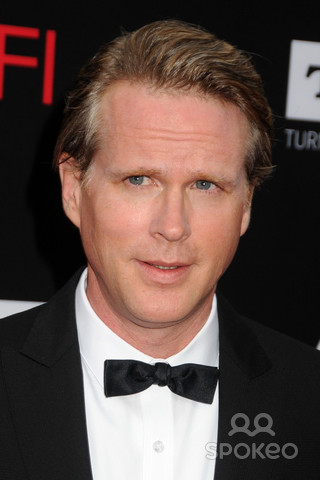 Ivan Simon Cary Elwes (/ˈɛlwɪs/; born 26 October 1962)[1][2] is an English-American actor and writer.[3][4] He is best known for his roles as Westley in The Princess Bride, Robin Hood in Robin Hood: Men in Tights, Fritz Arno Wagner in Shadow of the Vampire, Arnold in Georgia Rule and as Dr. Lawrence Gordon in Saw. His other noted roles include Glory, Kiss the Girls, Days of Thunder, Bram Stoker's Dracula, Hot Shots!, Twister, The Jungle Book, Ella Enchanted , and Liar, Liar.[5] He has also had recurring roles in television series such as The X-Files and Psych and Crackle's The Art of More. He also appeared in several episodes of Granite Flats.

Ivan Simon Cary Elwes was born on 26 October 1962 in Westminster, London, the youngest of three sons of portrait painter Dominic Elwes[6] and interior designer and socialite Tessa Kennedy. He is the brother of artist Damian Elwes[7] and film producer Cassian Elwes. His stepfather, Elliott Kastner, was an American film producer.[6] His paternal grandfather was painter Simon Elwes,[7] whose own father was the diplomat and tenor Gervase Elwes (1866-1921).[8] His other great-grandfathers include the diplomat Rennell Rodd, 1st Baron Rennell and industrialist Ivan Rikard Ivanović. Elwes has English, Irish, Croatian Jewish, Serbian, and Scottish ancestry.[9] His Croatian and Serbian roots come from his maternal grandmother, Daška McLean, whose second husband, Billy McLean, was an operative for Special Operations Executive during World War II.[10][11]

One of Elwes' relatives is John Elwes, who is alleged in some sources to have been the inspiration for Ebenezer Scrooge in A Christmas Carol (1843).[12] Elwes himself played five roles in the 2009 film adaptation of the novel.[12] Through his maternal grandfather, Elwes is also related to Sir Alexander William "Blackie" Kennedy, one of the first photographers to document the archaeological site of Petra following the collapse of the Ottoman Empire.[13]

Elwes was brought up as a Roman Catholic and was an altar boy at Westminster Cathedral, although he did not attend denominational schools as most of the men on his father's side of the family had, including his father.[14] His paternal relatives include such clerics as Dudley Charles Cary-Elwes (1868-1932), the Roman Catholic Bishop of Northampton, Abbott Columba Cary-Elwes (Ampleforth Abbey, Saint Louis Abbey), and Father Luke Cary-Elwes (Fort Augustus Abbey). He discussed this in an interview while he was filming the 2005 CBS television film Pope John Paul II, in which he played the young priest Karol Wojtyła.

Elwes' parents divorced when he was four years old, and in 1975, when Elwes was 12, his father committed suicide. For his education, Elwes attended Harrow School.[7] He then attended the London Academy of Music and Dramatic Art.[15] In 1981, he moved to the United States to study acting at Sarah Lawrence College in Bronxville, New York.[16] While living there, Elwes studied acting at both the Actors Studio[16] and the Lee Strasberg Theatre and Film Institute under the tutelage of Al Pacino's mentor, Charlie Laughton (not to be confused with English actor Charles Laughton).[15] As a teenager, he also worked as a production assistant on the films Absolution, Octopussy, and Superman, where he was assigned to Marlon Brando. When Elwes introduced himself to the famous actor, Brando insisted on calling him "Rocky" after Rocky Marciano.[17]

Elwes made his acting debut in 1984 with Marek Kanievska's film Another Country loosely based on the English boarding school exploits of British spies, Burgess, Philby and MacLean, in which he played James Harcourt, a gay student.[7] He went on to play Guilford Dudley in the British historical drama film Lady Jane, opposite Helena Bonham Carter. He was then cast as a stable boy turned swashbuckler Westley in Rob Reiner's fantasy-comedy The Princess Bride, based on the novel of the same name by William Goldman. It was a modest box office success,[18] but received critical acclaim, earning a score of 96% on the review aggregation website Rotten Tomatoes.[19] Since being released on home video and television, however, the film has become a cult classic.[18]

Initially the studio didn't know how to market (The Princess Bride). Was it an adventure? A fantasy? A comedy? A romance? A kid's movie? In the end they sold it as a kid's movie and it largely had to rely on word of mouth ... (now) people tell me they still have their VHS copy that has been passed down from one generation to the next.
~ Interview from the film's DVD release in 2001[20]

Elwes continued working steadily, varying between dramatic roles, as in the Oscar-winning Glory (1989), and comedic roles, as in Hot Shots! (1991). In 1993, he starred as Robin Hood in Mel Brooks's comedy, Robin Hood: Men in Tights. Elwes also appeared in such films as Francis Ford Coppola's adaptation of Bram Stoker's Dracula, The Crush, The Jungle Book (1994), Twister, Liar Liar, and Kiss the Girls. In 1999, he portrayed famed theatre and film producer John Houseman for Tim Robbins in his ensemble film based on Orson Welles's musical, Cradle Will Rock. And months after that he traveled to Luxembourg to work with John Malkovich and Willem Dafoe in Shadow of the Vampire. In 2001, he co-starred in Peter Bogdanovich's ensemble film The Cat's Meow portraying movie mogul Thomas Ince who died mysteriously while vacationing with William Randolph Hearst on his yacht.

In 2004 Elwes starred in the horror-thriller Saw which, at a budget of a little over $1 million, grossed over $100 million worldwide.[21] The same year he appeared in Ella Enchanted, this time as the villain, not the hero. He made an uncredited appearance as Sam Green, the man who introduced Andy Warhol to Edie Sedgwick, in the 2006 film Factory Girl. In 2007 he appeared in Garry Marshall's Georgia Rule opposite Jane Fonda.

In 2010 he returned to the Saw franchise in Saw 3D (2010), the seventh film in the series, as Dr. Lawrence Gordon.[22] In 2011, he was selected by Ivan Reitman to star alongside Natalie Portman in No Strings Attached. That same year, Elwes and Garry Marshall teamed up again in the romantic comedy New Year's Eve.

In 2012 Elwes starred in the independent drama The Citizen.[23] and the following year Elwes joined Selena Gomez for the comedy ensemble, Behaving Badly directed by Tim Garrick. In 2014 he starred in John Herzfeld's ensemble comedy Reach Me. In 2015 he completed four movies: the ensemble drama, Sugar Mountain directed by Richard Gray; and the dramas H8RZ, directed by Derrick Borte, We Don't Belong Here, opposite Anton Yelchin and Catherine Keener directed by Peer Pedersen, and Being Charlie which re-united Elwes with director Rob Reiner after twenty-eight years and premiered at the Toronto International Film Festival.

Elwes made his first television appearance in 1996 as David Lookner on Seinfeld. Two years later he played astronaut Michael Collins in the Golden Globe Award-winning HBO miniseries From the Earth To the Moon. The following year Elwes was nominated for a Golden Satellite Award for Best Performance by an Actor in a Mini-Series or Motion Picture Made for Television for his portrayal of Colonel James Burton in The Pentagon Wars directed by Richard Benjamin. In 1999, he guest starred as Dr. John York in an episode of the television series The Outer Limits. Shortly afterward he received another Golden Satellite Award nomination for his work on the ensemble NBC Television movie Uprising opposite Jon Voight directed by Jon Avnet. Elwes had a recurring role in the final season (from 2001 to 2002) of Chris Carter's hit series The X-Files as FBI Assistant Director Brad Follmer.

In 2004 he portrayed serial killer Ted Bundy in the A&E Network film The Riverman, which became one of the highest rated original movies in the network's history and garnered a prestigious BANFF Rockie Award nomination. The following year, Elwes played the young Karol Wojtyła in the CBS television film Pope John Paul II, his second time working with Jon Voight. The TV film was highly successful not only in North America but also in Europe, where it broke box office records in the late pope's native Poland and became the first film ever to break $1 million (GBP 739,075.00 current) in three days.[25]

In 2007 he made a guest appearance on the Law & Order: Special Victims Unit episode "Dependent" as a Mafia lawyer. In 2009, he played the role of Pierre Despereaux, an international art thief, in the fourth-season premiere of Psych.[26] In 2010 he returned to Psych, reprising his role in the second half of the fifth season, again in the show's sixth season, and again in the show's eighth season premiere.[27] In 2014 Elwes played Hugh Ashmeade, Director of the CIA, in the second season of the BYUtv series, Granite Flats.

In May 2015 Elwes was cast in Crackle's first streaming network series drama, The Art of More, which explores the cutthroat world of premium auction houses. Elwes plays Arthur Davenport, a shrewd and eccentric world-class collector of illegal art and antiquities. The series debuted on 19 November and has been picked up for a second season.[28]

In April 2018 Elwes was cast as Mayor Kline for the third season of the Netflix series Stranger Things which is set to premier in 2019.[29]

Elwes' voice-over work includes the narrator in James Patterson's audiobook The Jester,[30] as well as characters in film and television animations such as Quest for Camelot, Pinky and The Brain, Batman Beyond, and the English versions of the Studio Ghibli films, Porco Rosso, Whisper of the Heart and The Cat Returns. For the 2004 video game The Bard's Tale, he served as screenwriter, improviser, and voice actor of the main character The Bard. In 2009, Elwes reunited with Jason Alexander for the Indian film, Delhi Safari.[31] The following year Elwes portrayed the part of Gremlin Gus in Disney's video game, Epic Mickey 2: The Power of Two. In 2014, he appeared in Cosmos: A Spacetime Odyssey as the voice of scientists Edmond Halley and Robert Hooke.

On 13 December 2012, The Hollywood Reporter announced that Elwes would be making his directorial debut in an independent film about the life of Kit Lambert, manager of the iconic rock group The Who, working with a script by Pat Gilbert, an editor of the British music magazine Mojo.[36] The film is based on interviews and recordings with Lambert made by journalist Jon Lindsay, and is being produced by Orian Williams.

In 2014, Elwes co-wrote the screenplay for a film entitled Elvis & Nixon, about the pair's famous meeting at the White House in 1970.[3] The film, which starred Michael Shannon and Kevin Spacey, was bought by Amazon as their first theatrical feature and was released on 22 April 2016.[37]

In August 2005, Elwes filed a lawsuit against Evolution Entertainment, his management firm and producer of Saw. Elwes said he was promised a minimum of one percent of the producers' net profits of the film and did not receive the full amount.[38] The case was settled out of court. In 2010 he reprised his role in Saw 3D.[39]

Elwes met photographer Lisa Marie Kurbikoff in 1991 at a chili cook-off in Malibu, California, and they became engaged in 1997.[40] They married in 2000 and have one daughter together.[41]