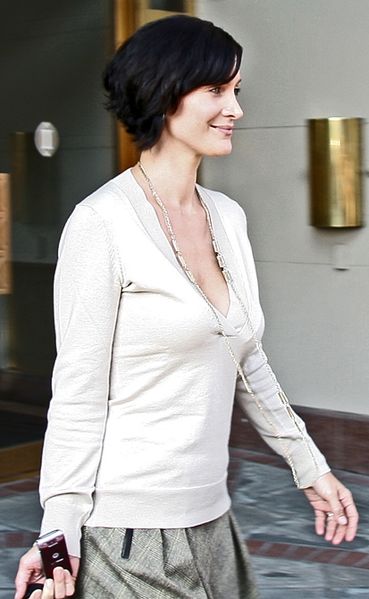 Carrie-Anne Moss was born in Burnaby, British Columbia, the daughter of Barbara and Melvyn Moss. She has an older brother, Brooke. Moss's mother reportedly named her after The Hollies' 1967 hit song, "Carrie Anne", which had been released in May that year. Moss lived with her mother in Vancouver as a child.[2] At the age of 11, she joined the Vancouver children's musical theatre and later went on to tour Europe with the Magee Secondary School Choir in her senior year.
Read more...

While in Spain, Moss obtained a role in the drama series Dark Justice, her first television appearance. She moved from Barcelona to Los Angeles with the series in 1992. She enrolled at the American Academy of Dramatic Arts in Pasadena upon her return, and she subsequently starred in Fox's prime time soap opera Models Inc., a spin-off of Melrose Place, as a model. The series was cancelled in July 1995. She headlined a short-lived made-in-Canada series entitled Matrix.[3] For most of the 1990s, she appeared in several television series such as Street Justice, Baywatch, F/X: The Series, Due South, for which she scored a nomination for the Gemini Award for Best Guest Actress in a Drama. Many of her film roles in the decade were in B movies, including Flash-fire (1994), The Soft Kill (1994), Tough-guy (1994), Lethal Tender (1996), Sabotage (1996) and The Secret Life of Algernon (1997).

Her breakthrough role came when she played Trinity in the science fiction thriller The Matrix (1999), directed by The Wachowskis and co-starring Keanu Reeves, Laurence Fishburne, Hugo Weaving, and Joe Pantoliano. Her role demanded extreme acrobatic actions, and she underwent a three-hour physical test during casting. The film grossed over US$460 million worldwide and was highly acclaimed by critics, who have considered it one of the greatest science fiction films ever made.[4][5] Moss asserted that prior to being cast in The Matrix, she had "no career". It launched Moss into international recognition and transformed her career; in a New York Daily News interview, she stated, "The Matrix gave me so many opportunities. Everything I've done since then has been because of that experience. It gave me so much".[6] Moss was nominated for the Saturn Award for Best Actress, and for the MTV Movie Award for Breakthrough Female Performance.

Moss had four film releases in 2000—Chocolat, Red Planet, The Crew and Memento. In the romantic comedy Chocolat, she took on the role of Caroline Clairmont, a cold, devoutly pious woman living in a French village. As part of an overall positive response towards the film, The New York Times remarked that Moss, "as an upright widowed mother swathed in mournful baby blue, radiates glimmers of hurt; she shows it's not easy to keep up such a front".[7] The film made US$152 million at the international box office.[8] The science fiction thriller Red Planet saw her play the commander and leader of a rescue mission to Mars. A.V Club felt that Moss was "largely reduced to worrying while modeling a series of tight-fitting space fashions".[9] Despite an US$80 million budget, the film only grossed US$33 million worldwide.[10] She appeared as detective Olivia Neal in the crime black comedy The Crew, directed by Michael Dinner and starring Burt Reynolds, Seymour Cassel and Richard Dreyfuss.

In Christopher Nolan's neo-noir psychological thriller Memento, she starred opposite Guy Pearce portraying a manipulative bartender who meets a man suffering from anterograde amnesia. Producer Jennifer Todd suggested Moss for the part after being impressed by her performance in The Matrix. While actress Mary McCormack lobbied for the role, Nolan decided to cast Moss as Natalie, saying, "She added an enormous amount to the role of Natalie that wasn't on the page".[11] The film became a sleeper hit, being acclaimed by critics and earning US$39.7 million over a US$9 million budget.[12][13] She won the Independent Spirit Award for Best Supporting Female for her performance.

Moss reprised the role of Trinity in the back-to-back sequels The Matrix Reloaded and The Matrix Revolutions, both released in 2003. Like the original, The Matrix Reloaded received positive critical reception,[14] and became a major box office hit, grossing US$742.1 million worldwide.[15] The Matrix Revolutions received a lukewarm critical reception, but made US$427.3 million globally.[16][17] During an interview with BBC.com, Moss expressed her pride for starring in the franchise, which she described as a "segment of life": "It's deep and it's beautiful to have been part of it for so long. It's pretty spectacular".[18] She provided voiceovers for video game and animated spin-offs of the films.

In 2005, Moss starred with Aaron Eckhart and Ben Kingsley in the little-seen thriller Suspect Zero, as FBI agent Fran Kulok, and was part of an ensemble cast in the independent dramedy The Chumscrubber, which premiered at the Sundance Film Festival. Moss appeared in the zombie comedy Fido (2006), playing a housewife in a 1950s-esque alternate universe where radiation from space has turned the dead into zombies. She noted the "very rich" and "very visual" script for the film, and became drawn to the project for its "underlying messages about control and domination".[6][19] The film was distributed for a limited theatrical release and received largely favorable reviews, with Los Angeles Times calling it a "crafty mixture of George Romero and Douglas Sirk".[20] Moss played the neighbor of an autistic woman in the small-scale romantic drama Snow Cake (2006), starring Alan Rickman and Sigourney Weaver. It was released in selected theaters, to positive reviews from critics. Moss earned a Genie Award nomination for Best Performance by an Actress in a Supporting Role.[21]

In the Hitchcockian thriller Disturbia (2007), Moss portrayed the mother of a troubled teenager (Shia LaBeouf) who suspects one of his neighbors is a serial killer. The film was met with a positive critical reception and made US$117.8 million around the globe.[22][23] She played one of the people who are brought together in the wake of a deadly car accident in the independent drama Normal (2007), released for selected theaters. Moss appeared opposite Julia Roberts, Willem Dafoe and Ryan Reynolds in the drama Fireflies in the Garden, which revolved around the inner lives and affairs of a family. The production premiered at the 2008 Berlin International Film Festival and was released theatrically in the United States in October 2011.[24] She starred in the straight-to-DVD romantic comedy Love Hurts (2009), alongside Richard E. Grant and Jenna Elfman.

In the thriller Unthinkable (2010), directed by Gregor Jordan and co-starring Samuel L. Jackson and Michael Sheen, Moss played the leader of an FBI counter-terrorism team assigned to interrogate a man who threatens to detonate three nuclear bombs in the United States.[25] The film received a direct-to-DVD release and generated controversy around its subject matter.[25] She took on the role of antagonist Claudia Wolf in the sequel to the 2006 horror film Silent Hill, Silent Hill: Revelation (2012). Budgeted at US$20 million, the film grossed US$52.3 million worldwide,[26][27] but has garnered an overwhelmingly negative reception among film critics and fans alike.[28] Mentioning Moss in its review for the film, The New York Times remarked that the supporting actors "deserve much, much better".[29] She voiced the character Aria in the video games Mass Effect 2 (2010) and Mass Effect 3 (2012).

She had a four-episode arc in the series Chuck between 2011 and 2012, and played the regular role of Las Vegas Assistant District Attorney Katherine O'Connell in the CBS period drama series Vegas, which premiered in September 2012, but was cancelled after its first season, despite an overall positive response.[30] Writing for The New York Times, Mike Hale felt that Moss "feels out of place in this frontier tale but looks great in snug wool suits".[31] Moss obtained the role of Penelope, a California candidate for governor who runs a free health clinic, in the political thriller Knife Fight (2012), directed by Bill Guttentag and co-starring Rob Lowe. The film premiered at the Tribeca Film Festival and was released for a two-theater run and digital platforms.[32] Moss headlined with Heather Graham the psychological dark comedy Compulsion (2013),[33] in which they both played women occupying neighboring apartments, each one grappling with psychological disorders that begin to overtake their lives.[34] The film opened for limited release.[35] She voiced the character of Admiral Wells in the fantasy animated film The Clockwork Girl (2014).

She starred with Kit Harington, Emily Browning and Jared Harris in the 3D historical disaster picture Pompeii (2014), produced and directed by Paul W. S. Anderson. The film, inspired by the eruption of Mount Vesuvius in 79 that destroyed the Roman Empire city Pompeii, saw her portray Aurelia, the wife of the city governor (Harris). With an over-US$80 million budget,[36] the film only grossed US$23.2 million in North America, but its worldwide gross total was US$117.8 million.[37] In the independent drama Elephant Song (2014), directed by Charles Binamé, Moss starred opposite Bruce Greenwood and Xavier Dolan as the wife of a psychiatrist (Greenwood). The film was screened at the Toronto International Film Festival, and in its review for the film, Variety described her role as "a pushily self-centered second wife" and found her part to be "a poorly integrated subplot" in the film.[38] In 2015, she voiced a widowed mother in the made-for-television animated film Pirate's Passage, was one of the narrators in the documentary Unity, and appeared as the wife of Victor Frankenstein in Frankenstein, an updated adaptation of Mary Shelly's book.

In 2015, Moss appeared in Jessica Jones as Jeri Hogarth, an attorney and potentially powerful ally to the title character. The gender of the character was changed from male to female for the series, and the character was made a lesbian.[39] Moss signed on to the series after reading the first two scripts, having been pitched the character by producer Jeph Loeb and screenwriter Melissa Rosenberg. She described the character by saying that "she's fierce, she's strong, she's powerful, and she likes that power".[40] The web series premiered on Netflix, to critical acclaim.[41] Moss has also reprised her role of Jeri Hogarth in the second-season finale of Daredevil, and has had recurring arcs in Iron Fist and The Defenders. Moss took on the lead role of Dr Athena Morrow, an AI researcher invited to reverse engineer a consciousness program,[42] in the second season of the science-fiction series Humans.[43] Moss filmed a supporting part in the supernatural horror film The Bye Bye Man (2017), playing what Variety described as "the world's most soft-edged hard-bitten police detective".[44] Despite negative reviews, the film grossed US$24 million worldwide on a budget of US$7 million.[45]

Moss married American actor Steven Roy in 1999, and they have two sons and a daughter.[46] The family resides in Los Angeles.[19]