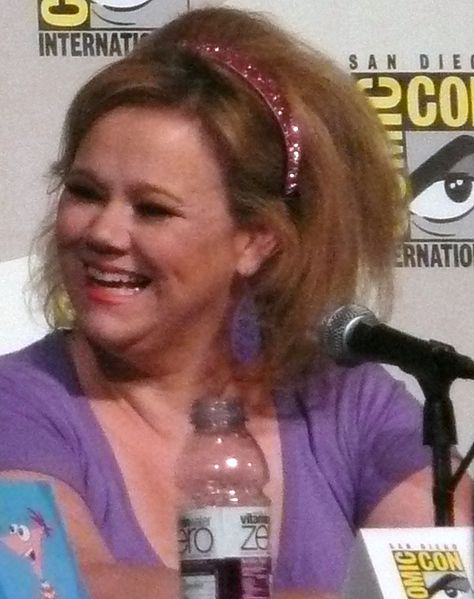 Caroline Rhea (born April 13, 1964) is a Canadian stand-up comedian and actress who is best known for her role as Hilda Spellman on the ABC show Sabrina the Teenage Witch.

She has performed numerous comedy specials, including three one-hour standup specials for HBO, Showtime, and Bravo. She is also known as the voice of Linda Flynn-Fletcher on the Disney Channel series Phineas and Ferb and as a regular on Hollywood Squares with her friend Whoopi Goldberg. Rhea was chosen by Rosie O'Donnell as the new hostess of her syndicated talk show, renamed The Caroline Rhea Show and hosted the reality television show The Biggest Loser on NBC for the first three seasons. She appears regularly on ABC's Match Game with Alec Baldwin and is reprising her roles as Eugenia Scrimmage in the Bruno & Boots movie franchise and Noleta Nethercott in A Very Sordid Wedding.

Rhea moved to New York in 1986 to pursue a career as a comedian and actress. She began performing at venues like Catch a Rising Star and The Comic Strip, where she performed along with comedians including Chris Rock, Louis C.K., Dave Attell, Marc Maron, and Jim Gaffigan. Rhea made her first filmed standup appearances on MTV's Half-Hour Comedy Hour, Comic Strip Live and Caroline's Comedy Hour.

After finding success in New York as a comedian, Caroline moved to Los Angeles to pursue an acting career in Hollywood, debuting on NBC's television series Pride & Joy, where she co-starred with Jeremy Piven. She later gained widespread fame for her role as Aunt Hilda on the ABC (and later, The WB network) television show, Sabrina the Teenage Witch, and for her recurring role on the latest incarnation of Hollywood Squares.

Rhea is also well known for her role as Linda Flynn-Fletcher on the long-running Disney show Phineas and Ferb, for her syndicated daytime talk show, The Caroline Rhea Show, as the original host of The Biggest Loser on NBC, and for playing Noleta Nethercott on the TV series Sordid Lives: The Series for Logo, which has recently been rebooted as a feature called A Very Sordid Wedding, which premiered in March 2017 in Palm Springs.

In 2004, she appeared in the cult-classics Disney's Mom's Got a Date with a Vampire and in Christmas with the Kranks. In 2005, Rhea appeared in The Perfect Man, playing a co-worker of Jean (Heather Locklear) and had a recurring role on the hit Disney Channel Original Series, The Suite Life of Zack & Cody as Ilsa Shickelgubermeiger-Von Helsing der Keppelugerhofer, an inspector turned manager of the rival hotel. In 2007, she starred in the original Lifetime Television movie To Be Fat Like Me opposite Kaley Cuoco and in the Fox animated series Two Dreadful Children.

In 2008, Rhea starred alongside Justin Guarini and Mircea Monroe in the MarVista Entertainment production of Fast Girl. In 2013, Rhea hosted a travelling live stage show version of the game show Family Feud which toured fairs in the US and Canada, including the Calgary Stampede. In 2017, she has had a recurring role on ABC's revival of Match Game.[3]

In 2018, Rhea began hosting Caroline & Friends on GSN. The series features funny videos of animals and children. The studio audience votes for the best video chosen by Rhea and her two guest comedian co-hosts.[4]

Rhea has appeared at Comic Relief as well as the Ms. Foundation's "Women of Comedy from Caroline's Comedy Club". She appeared as a contestant in 2001 on a special edition of Who Wants to Be a Millionaire, winning $125,000 for her charity.

Report a problem
Write to Caroline Rhea at FanPal • 2021