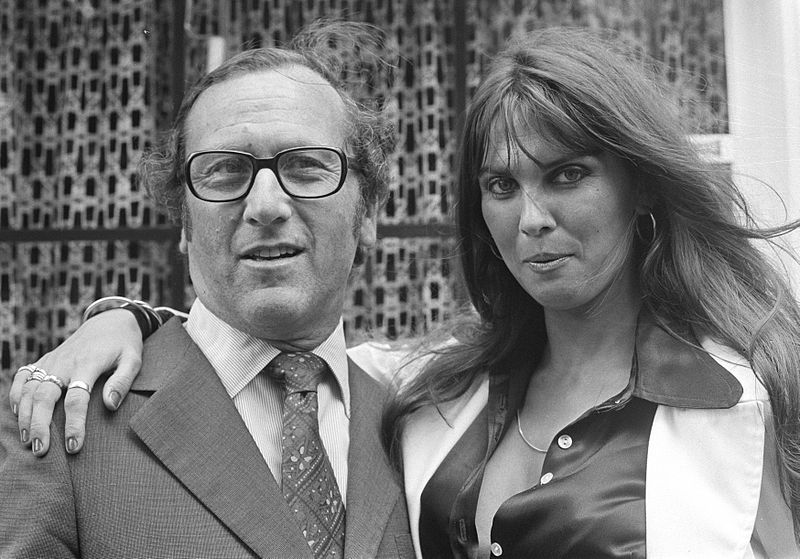 Caroline Munro (born 16 January 1949)[1] is an English actress and model known for her many appearances in horror, science fiction and action films of the 1970s and 1980s.[2]

Munro's career commenced in 1966 when her mother and a photographer friend entered some headshots of her in The Evening News's "Face of the Year" contest. As she said:

I wanted to do art. Art was my love. I went to art school in Brighton but I was not very good at it. I just did not know what to do. I had a friend at the college who was studying photography and he needed somebody to photograph and he asked me. Unbeknownst to me, he sent the photographs to a big newspaper in London. The fashion photographer, David Bailey, was conducting a photo contest and my picture won.[3]

This led to modelling work for Vogue magazine at the age of 17.[3] She moved to London to pursue modelling work and became a cover girl for fashion and TV advertisements while there. She had bit parts in films such as Casino Royale[2] and Where's Jack?.[3] One of her photo ads lead to a screen test and a one-year contract at Paramount[4] where she was cast as Richard Widmark's daughter in the comedy western A Talent for Loving.[4]

In 1971 she was mentioned in Colin Blunstone's song "Caroline Goodbye", a song about the break-up of their relationship.[5]

Also in 1971 she appeared alongside Vincent Price in The Abominable Dr Phibes, playing the deceased Victoria Regina Phibes. She reprised the role in the 1972 sequel, Dr Phibes Rises Again.[citation needed]

Hammer Films CEO, Sir James Carreras, spotted Munro on a Lamb's Navy Rum poster/billboard. He asked his assistant, James Liggett, to find and screen test her. She was promptly signed to a one-year contract. Her first film for Hammer proved to be a turning point in her career. It was during the making of Dracula AD 1972[6] that she decided from this film onward she was a full-fledged actress.[7]

Munro has the distinction of being the only actor ever signed to a long-term contract by Hammer Films. She would later turn down the lead female roles in Hammer's Dr Jekyll and Sister Hyde, Frankenstein and the Monster from Hell, and the unmade Vampirella because they required nudity.[8]

The Golden Voyage of Sinbad

Munro with Charles H. Schneer in 1974 in Amsterdam during the premiere of The Golden Voyage of Sinbad Munro in Amsterdam in 1974

Brian Clemens later helped her get the role of Margiana, the slave girl in The Golden Voyage of Sinbad.

I got the part - I had been signed by Hammer, for one year, for a contract, out of which I did two films, one being Dracula AD 1972, and the second one being Captain Kronos - Vampire Hunter, which, kind of, would come full-circle, to Sinbad. It was written and directed by Brian Clemens, who wrote the screenplay for The Golden Voyage of Sinbad, so, I was lucky enough to be chosen for Captain Kronos, and they were searching for somebody to do Sinbad, and they wanted a big name, somebody American, or well-known, but Brian said "No". He kept lobbying Charles Schneer and Ray Harryhausen — saying: 'I think you should come and look at the rushes, and see what you think, because I think she's right'. So, they said "No", but, eventually, Brian persuaded them to do that, and they saw the rushes, and that was how I got the part. So, it was lovely, like work-out-of-work. I was very lucky to have done that.[9]

Today Caroline is a Trustee of the Ray and Diana Harryhausen Foundation.[10]

Other appearances during this time included I Don't Want to Be Born with Joan Collins, and At the Earth's Core with Peter Cushing and Doug McClure. She appeared also as Tammy, a nursing employee of a sinister health farm, in "The Angels of Death", [11] an episode of the TV series The New Avengers that featured also rising stars Pamela Stephenson and Lindsay Duncan. This was notable, among other things, for a vicious fight between Munro and Joanna Lumley's character of Purdey.[citation needed]

In 1977, Munro turned down the opportunity to play villainess Ursa in Superman in favour of Naomi in The Spy Who Loved Me.[2]

Munro continued to work in numerous British and European horror and science fiction films through the 1970s and 1980s, most notably Starcrash with David Hasselhoff, Christopher Plummer and Marjoe Gortner.

Munro's career continued to thrive well in the 1980s, appearing in many slasher and Eurotrash productions. Her first film shot on American soil was the William Lustig production Maniac.[12] This was soon followed by the "multi-award winning, shot during the Cannes Film Festival" shocker The Last Horror Film[6] (directed by David Winters), in which she was reunited with her Maniac (and Starcrash) co-star Joe Spinell. She had a cameo role in the film Don't Open Till Christmas,[6] Slaughter High,[6] Paul Naschy's Howl of the Devil, and Jess Franco's Faceless, followed in rapid succession. She reteamed with Starcrash director, Luigi Cozzi, for Demons 6: De Profundis (aka Il gatto nero) in 1989, though this would be her last major film appearance.

Throughout the 1980s, Munro was reported as being a candidate for the co-starring role in a rumoured, but never produced, feature film based upon Doctor Who. The feature was reported to be co-produced by her second husband George Dugdale.[citation needed]

She was also a candidate to play comic-strip heroine Modesty Blaise in a more faithful adaptation of the character than the movie starring Monica Vitti, but the proposed movie was never made.[citation needed]

Between 1984 and 1987, Munro was also a hostess on the Yorkshire Television game show 3-2-1. Munro was also a popular pin-up girl during this time, though she refused to pose nude. In the early 1980s, she appeared in music videos for Adam Ant's "Goody Two Shoes" and Meat Loaf's "If You Really Want To".[4]

An early effort of Munro was a release Columbia with "Tar and Cement" backed with "The Sporting Life". The musicians who played on the recording included Eric Clapton, Jack Bruce and Ginger Baker.[13][14]

During the 1970s, she recorded a number of singles with her husband Judd Hamilton. They included "You Got It" bw "Where Does Love Begin", "Rhythm Of The Rain" bw Sound Of The Rain" and "Love Songs" bw "Sound Of The Sun".[15]

In 1984, Munro collaborated with Gary Numan for the single "Pump Me Up", which was released on Numan's Numa record label.[16]