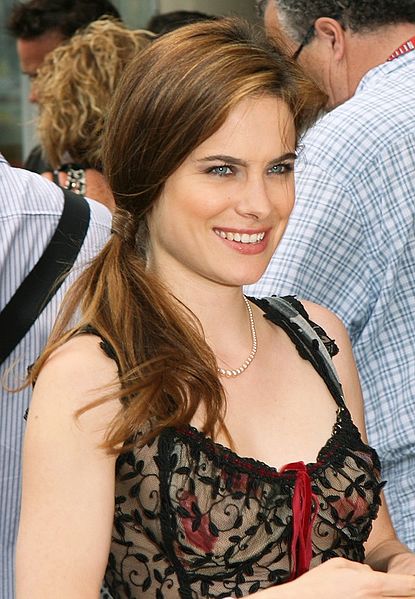 Caroline Dhavernas (/ˈkærəlɪn dəˈvɜːrnə/; born May 15, 1978) is a Canadian actress. She is best known for her work with Bryan Fuller on his projects, such as Jaye Tyler in the Fox comedy-drama series Wonderfalls, and Dr. Alana Bloom in the NBC psychological horror drama series Hannibal. She also starred as Dr. Lily Brenner in the ABC medical drama Off the Map. As of late winter/early spring 2018, she is in the second season of the Canada-produced and Canadian- and American-distributed medical thriller Mary Kills People.

In September she gave birth to a daughter named Françoise. The father of the child is Maxime le Flaugais.

Dhavernas was born in Montreal, Quebec, the daughter of the Québécois actors Sébastien Dhavernas and Michèle Deslauriers. Her sister Gabrielle Dhavernas is also an actress and specialises in dubbing. The voice timbre of both actresses is very similar, so similar that Gabrielle can dub the voice of Caroline. She learned English at a very young age, as her parents sent her to an English-speaking elementary school called The Priory School.
Read more...

She began her career at the age of 8, dubbing voices for television productions such as Babar. At the age of 12 she began her acting career in the film Comme un Voleur (1990).

Dhavernas portrayed swimmer Marilyn Bell in the television film Heart: The Marilyn Bell Story (1999). She trained for two months with the Pointe-Claire Swim Club to convincingly portray Bell, who was the first to cross 32-mile Lake Ontario in 1954. Other notable films have included a leading role in Edge of Madness (2002), and supporting roles in Out Cold (2001) and Lost and Delirious (2001). She also had a notable role on Law & Order as a closeted, gay teenager who killed her girlfriend in the episode "Girl Most Likely" (12x17).

Her highest-profile work to date is the portrayal of Jaye Tyler, the central character in Wonderfalls, which debuted on US television in March 2004. Jaye is an over-educated underachiever from a wealthy family, who lives in a trailer park and works at the Wonderfalls Gift Emporium, a Niagara Falls gift shop. The show's premise is that Jaye is spoken to by inanimate objects, which encourage her to help others. Dhavernas has described the show as being like "Touched by an Angel on acid". The show received widespread critical praise, but Fox cancelled the show after only four episodes aired. Millions of fans signed an online petition with the hope that Fox would continue the show, and as a result 20th Century Fox released the DVD with all 13 completed episodes. She did her own voice-overs for the French translation of Wonderfalls.

Since the cancellation of Wonderfalls, Dhavernas has continued to appear in Canadian-made features, such as Niagara Motel and These Girls. She also appears in Hollywoodland (2006) about the death of actor George Reeves, as well as Breach (2007).

Dhavernas also took the lead role in Surviving My Mother (which went under the working title of The Yellow Woman), a film directed by Émile Gaudreault which premiered at the Festival des films du monde of Montreal on August 28, 2007. The wider theatrical release was November 2, 2007. In 2008, Dhavernas starred in Passchendaele, a film written and directed by Paul Gross about the Battle of Passchendaele. Passchendaele accounted for half of 2008's box office revenue from made-in-Canada anglophone films and as of 2009 is the most expensive film in Canadian history.

It's a beautiful film and I'm really, really happy to be part of it. It's about battle of Passchendaele, which was a very important battle for Canadians and it's a big part of our history. It was just so amazing to be privileged to live a little part of that history. A piece of our history.[1]

Other projects include The Cry of the Owl, a film adaptation of Patricia Highsmith's novel of the same name, and the popular Quebec comedy Father and Guns (De père en flic). She also appeared in the first and last episodes of HBO's miniseries The Pacific, produced by Steven Spielberg and Tom Hanks, and a guest role on Law & Order: Criminal Intent, where she played Maya in the episode "Love Sick" in May 2010.

In 2012, audiences saw her in Martin Villeneuve's Mars et Avril, a science fiction film based on the graphic novels of the same name.[2][3]

In 2013, she was cast as the female lead, Dr. Alana Bloom, in Hannibal, reuniting her with Wonderfalls creator Bryan Fuller.

Dhavernas currently stars in the Canadian black comedy-drama medical thriller Mary Kills People, which premiered on Global on January 25, 2017, and Season 2 on January 3, 2018. The series premiered in the U.S. on April 23, 2017, on the Lifetime U.S. basic cable network. Season 2 debuted on Lifetime on March 13, 2018. Each season consists of six (6) episodes on both Global and Lifetime.[4]

She also voices the narrator in the video game from Ubisoft titled Child of Light.[5]