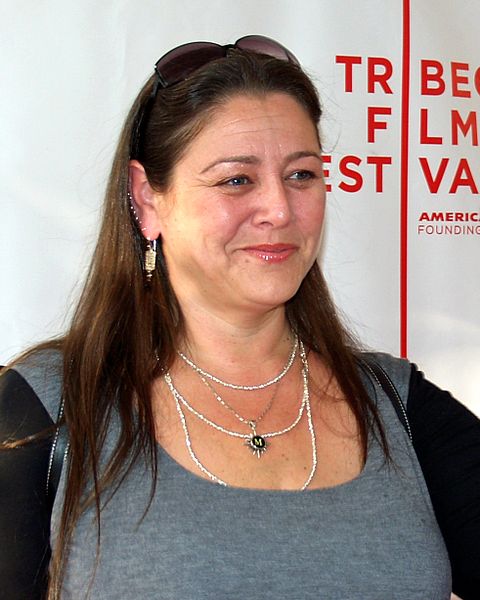 Camryn Manheim (born March 8, 1961) is an American actress known primarily for her roles as attorney Ellenor Frutt on ABC's The Practice, Delia Banks on CBS's Ghost Whisperer, as Elvis's mother, Gladys Presley in the 2005 mini-series Elvis, and "Control" on Person of Interest. In 1998 she won the Primetime Emmy Award for Outstanding Supporting Actress in a Drama Series for her work on The Practice.

Manheim was born in Caldwell, New Jersey and grew up in Peoria, Illinois.[1] She is the daughter of Sylvia, a teacher, and Jerome Manheim, a mathematics professor.[2] Her family is Jewish.[3][4] She attended Woodrow Wilson Classical High School in Long Beach, California and became interested in acting after working at a Renaissance fair during high school.[5] Manheim graduated from University of California, Santa Cruz with a BFA degree in 1984 and New York University's Tisch School of the Arts Graduate Acting Program with an MFA degree in 1987.[6] Her brother, Karl Manheim, is a law professor at Loyola Law School.[7][8]
Read more...

Manheim (lower left) on the Spring 2003 cover of Ms. magazine

Manheim worked for a while as a sign language interpreter at hospitals.[9] Her knowledge of sign language was used on The Practice, in an episode of Law & Order, and in her role as a child behavioral psychologist in the movie Mercury Rising.[citation needed] In 1983, she made a brief appearance as a girl in an elevator in Sudden Impact alongside Clint Eastwood, in the post-courtroom scene at the beginning.

Manheim's breakthrough was her one-woman show, "Wake Up, I'm Fat," which played off-Broadway at Classic Stage Company in 1994.[10] She adapted the show into a book of the same name, which was published by Broadway Books in 1999.[11]

In 2005, Manheim earned Golden Globe and Emmy nominations for her work in the miniseries Elvis, and the following year she joined the cast of Ghost Whisperer. Her other television credits include Chicago Hope, Ally McBeal, Family Guy, Will & Grace, Boston Public, Two and a Half Men, The L Word, How I Met Your Mother and Hannah Montana. She also voiced Juliet in the episode "Company Picnic" of Dilbert on UPN in 2000.

In addition, Manheim has several film credits. These include Romy and Michele's High School Reunion, Happiness (which earned her and her co-stars a National Board of Review Award for Best Acting by an Ensemble), The Laramie Project, Scary Movie 3, Dark Water and An Unfinished Life.

In 2015, Manheim was in the Deaf West production of the musical Spring Awakening as Adult Women. The production, which had a cast composed half of hearing actors and half of deaf or hard-of-hearing actors, paired every deaf actor (who signed their lines in American Sign Language) with a hearing actor who said their lines verbally. Manheim voiced for Marlee Matlin as well as signing her own dialogue in the parts of Frau Bergmann, Fräulein Großebüstenhalter, and Fräulein Knuppeldick.

Her only child, son Milo Jacob Manheim, was born March 6, 2001, two days before her 40th birthday.[13][14] According to the National Enquirer, Milo's father is model Jeffrey Brezovar, a friend of Manheim's, with his conception taking place by sperm donation.[15]

Manheim has been involved with the Los Angeles-based charity, Bet Tzedek Legal Services - The House of Justice, serving as a co-chair for their annual fundraiser, The Justice Ball.[16][17]