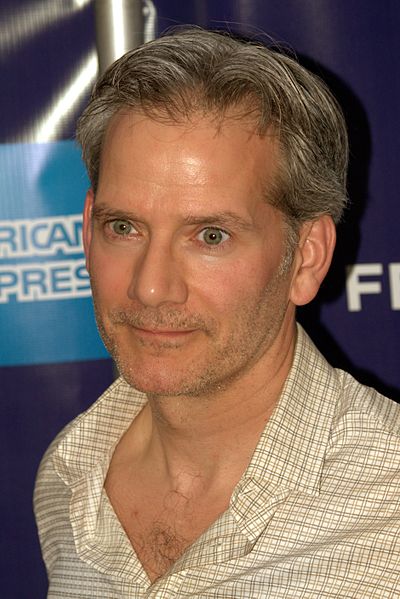 Campbell Scott (born July 19, 1961) is an American actor, director, producer, and voice artist. He is known for his roles as George Tunner on The Sheltering Sky, Boris Kuester von Jurgens-Ratenicz on Royal Pains, Mark Usher on House of Cards, Joseph Tobin on Damages, and Richard Parker in The Amazing Spider-Man and The Amazing Spider-Man 2, as well as numerous stage appearances.

Scott was born on July 19, 1961, in New York City, the son of American actor George C. Scott and Canadian actor Colleen Dewhurst. He graduated from Lawrence University in 1983. His brother is Alexander Scott.[1] He also has one paternal half-sister, actress Devon Scott.
Read more...

In 1990, Scott played a lead role in the ground-breaking film Longtime Companion, which chronicles the early years of the AIDS/HIV epidemic and its impact upon a group of American friends. In the following year, Scott co-starred in the movie Dying Young (in which his mother also appeared) alongside Julia Roberts. He also appeared in the 1992 Cameron Crowe movie Singles alongside Bridget Fonda and Kyra Sedgwick, and in 1996, he teamed up with Stanley Tucci to direct the film Big Night. The film met with critical acclaim and was nominated for the "Grand Jury Prize" at the Sundance Film Festival. For their work, Scott and Tucci won both the New York Film Critics Circle Award and the Boston Society of Film Critics Award for Best New Director.

In 2002, he was awarded the Best Actor prize from the National Board of Review for his notable performance in Roger Dodger. Scott starred in Six Degrees on ABC in 2006.

In 2005-2006, Scott served as the reader for the audiobook versions of Stephen King's bestsellers The Shining and Cell.

In 2007, Scott lent his voice for the narration of a Chevron Corporation television ad, as well as the critically acclaimed Iraq War documentary film, No End in Sight. Next up for Scott was the 2009 drama Handsome Harry. Scott also had a recurring role on the USA drama Royal Pains, as Boris Kuester von Jurgens-Ratenicz.

On August 28, 2009, TVGuide.com confirmed Scott was cast for the third season of Damages. Scott was a series regular, playing Joe Tobin, the son of indicted Bernie Madoff-like Louis Tobin (Len Cariou). The season aired from January to April 2010.[2]

In May 2010, Scott provided the voice-over for a new Häagen-Dazs TV commercial called "Ode to Flavor".[3] The ad was created by Goodby, Silverstein & Partners, directed by Noah Marshall with art direction by Croix Cagnon.[4] He played the role of Richard Parker, the father of Peter Parker, in the 2012 film The Amazing Spider-Man. Scott reprised his role in the 2014 film The Amazing Spider-Man 2.

From December 2015 to March 2016, Scott appeared as Lloyd Dallas in the Broadway revival of Noises Off.

In 2017, he collaborated with Dutch DJ and producer Ferry Corsten on Blueprint, an album combining Trance music and science fiction, in which he can be heard as the story's narrator.[5]

Scott has two sons, Malcolm and Callan. He lives with his family in northwest Connecticut.[1]