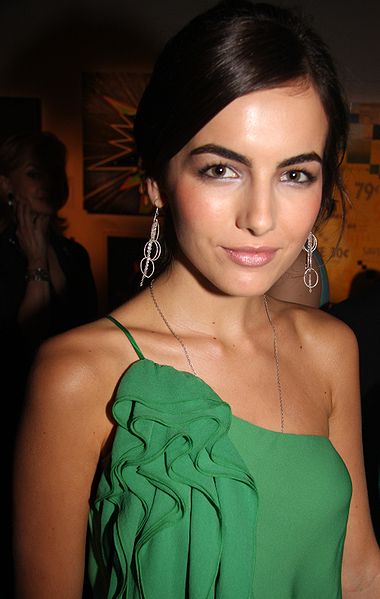 Camilla Belle Routh (born October 2, 1986) is a Brazilian-American actress, director, writer and producer. Her works include The Ballad of Jack and Rose, When a Stranger Calls, 10,000 BC, and Push.

Belle was born in Los Angeles, California. Her mother, Cristina Gould, is a Brazilian fashion designer and her father, Jack Wesley Routh, owns a construction company and was a composer of country music.[1] Belle was raised in a Catholic household. She attended the Católica Elementary School of São Paulo[2] and then the Marlborough School, an all-girl high school in Los Angeles.[2] She grew up speaking Portuguese.[3]

During her childhood, Belle would spend seasons in Santos, Brazil, the hometown of her mother. She adopted many Brazilian habits, such as the taste for Brazilian telenovelas.[4]

She made her professional debut in a print ad at nine months. At age five she was cast as a lead in her first film, NBC's thriller, Trapped Beneath the Earth.[5] Belle began her career with a small role in the film production of the novel A Little Princess (1995). In The Lost World: Jurassic Park (1997), she played a girl who was attacked by a pack of Compsognathus.

In 1998, she played Aubrey Shepard on the Focus on the Family radio drama Adventures in Odyssey. Following a turn as Steven Seagal's daughter in The Patriot (1998), she earned a 1999 Youth in Film Young Artist Award nomination for her portrayal of Sandra Bullock's character as a girl in Practical Magic (1998), as well as another nomination the same year for her guest appearance on the TV series Walker: Texas Ranger.

She received her third and fourth Young Artist Award nominations respectively for the telefilm Replacing Dad (1999) and for her first lead role, in the Disney Channel TV Movie Rip Girls (2000).

Belle played the lead role in the television movie Back to the Secret Garden (2001), then took a break from acting before returning with a role in the independent film The Quiet (2005).[6] SFStation wrote that "performance-wise The Quiet belongs to Camilla Belle and Elisha Cuthbert"[7]

She returned to performing after a short break with the lead role in the remake of When a Stranger Calls (2006). She then played a lead role in her biggest box office hit to date, the Roland Emmerich-directed big-budget film 10,000 BC. Since this $270 million hit, Belle has played a number of lead roles in smaller independent, direct-to-video, short and unreleased films. As of October 2018[update], her last film was The Mad Whale (2017), a student project produced by James Franco's Elysium Bandini Studios and the USC School of Cinematic Arts.[8]