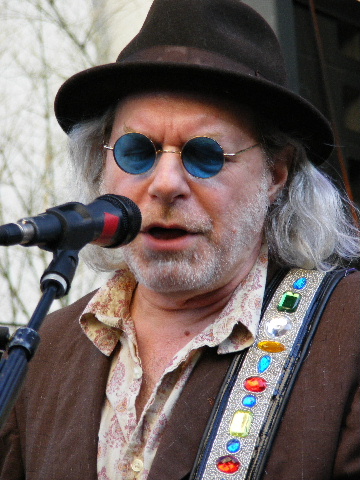 Buddy was born in Fairborn, Ohio, near Dayton, and his family ended up settling in Princeton, New Jersey.[1] His grandfather gave him the nickname "Buddy."[2]

In 1975, he moved to Austin, Texas and played rockabilly music in Ray Campi's band. He auditioned for and played in a band with Julie Griffin (soon to be his second wife).[1][3]

In 1980, they moved to New York City, and Miller formed the Buddy Miller Band,[4] which included singer-songwriter Shawn Colvin on vocals and guitar. He also performed with Jim Lauderdale and Larry Campbell.[3] Each Sunday, Miller performed in Kinky Friedman's band at the Lone Star Cafe.[5]

Miller moved to Nashville in the 1990s, after a stint in Los Angeles. He worked on recording sessions as a guitar player and vocalist, and began producing his own records in his living room studio named Dogtown.[6][7]

In 1995, Buddy along with the Sacred Cows recorded a gospel album, Man on the Moon.[8]

He and his wife, Julie Miller, released Buddy & Julie Miller in 2001, which won the Album of the Year Award from the Americana Music Association.[12]

2009 brought another Buddy and Julie duet album Written in Chalk[15] and in 2011 Buddy collaborated with Bill Frisell, Marc Ribot, and Greg Leisz to release The Majestic Silver Strings.[16]

Miller has toured as lead guitarist and backing vocalist for Emmylou Harris's Spyboy band,[19] Steve Earle on his El Corazon tour,[20] and Emmylou Harris and Linda Ronstadt on their Western Wall tour.[21]

In 2002, Miller toured as part of the Down from the Mountain Tour along with Alison Krauss and Union Station.[22]

In 2008, Miller toured as part of the band on Robert Plant and Alison Krauss's Raising Sand tour of the U.S. and Europe.[24]

In 2009, Buddy joined Emmylou Harris, Patty Griffin and Shawn Colvin on tour as Three Girls and Their Buddy.[25] While on that tour, following a performance in Baltimore on February 19, 2009, Miller suffered a heart attack. He underwent successful triple bypass surgery at Johns Hopkins Hospital on February 20.[26]

In 2010, Miller again joined Robert Plant and Patty Griffin with Plant's Band of Joy, touring the U.S. and Europe.[27]

In 2016, Buddy was part of the Lampedusa: Concerts for Refugees tour featuring Patty Griffin, Emmylou Harris, Steve Earle, and the Milk Carton Kids.[29]

For the past decade, Buddy has often been a part of the Cayamo Cruise, which sails from Miami to St. Maarten and Tortola. Each year, prominent Americana musicians are on board, and Buddy often collaborates and records with them.[30]

Recording work for others

Miller produced Patty Griffin's Downtown Church[40] that was released in 2010 and won a Grammy Award for Best Traditional Gospel Album on February 13, 2011.[41]

Miller has produced his own solo albums as well as recordings for and with his wife, singer-songwriter Julie Miller.

He co-produced and performed on Jimmie Dale Gilmore's 2000 album One Endless Night.[42] He also played on Lucinda Williams's Car Wheels on a Gravel Road album.[43]

Along with Don Was, Miller was the musical director for The Life and Songs of Emmylou Harris tribute concert.[46]

Miller was musical director and bandleader for the Americana Music Association's Honors & Awards shows broadcast on AXS TV and PBS.[47]

Buddy has covered Tom T. Hall's song, "That's How I Got to Memphis", which Jeff Daniels sang in the final episode of HBO's The Newsroom in 2014.[48]

Starz political drama Boss used the Plant-Miller produced "Satan, Your Kingdom Must Come Down" as its theme song.[49]

Miller produced the track "Beyond the Blue" featuring Emmylou Harris and Patty Griffin for the 2000 film Where the Heart Is.[50]

In 2015 he appeared on Christina Aguilera's song, "Shotgun", which was written for her appearance on Nashville.[51]

Awards, accolades, and other activities

No Depression magazine named him Artist of the Decade in 2008.[1]

Miller is a four-time Grammy nominee, winning once in 2010 for producing Downtown Church by Patty Griffin[55].

Miller and his longtime friend and collaborator Jim Lauderdale teamed up in 2012 to produce The Buddy & Jim Radio Show, broadcast on Sirius XM Outlaw Country.[56]