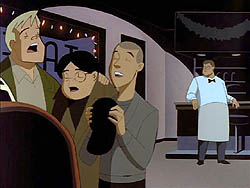 Timm was born on February 5, 1961, in Oklahoma, the third of four children. His father was an engineer and his mother worked for the phone company. Timm's family first moved to Ohio when Timm was two years old, and then to California when Timm was five or six.
Read more...

Timm's early career in animation was varied; he started at Filmation, working on the layout of Blackstar, Flash Gordon, He-Man and the Masters of the Universe, its spin-off She-Ra: Princess of Power, and The Lone Ranger (Timm also did background work on G.I. Joe). He also worked for numerous other employers, including Ralph Bakshi, Don Bluth Productions, and attempted to find work at Marvel Comics and DC Comics, but without luck. In 1988 he worked at DiC on The Real Ghostbusters for one season, then joined Warner Bros. in 1989. At Warner, Timm worked on Tiny Toon Adventures.

However, Timm is best known for his subsequent work on the animated series based on various DC Comics superheroes, popularly referred to as the "DCAU" (DC animated universe). Along with his Tiny Toons partner Eric Radomski, Timm co-created and produced the Emmy Award-winning Batman: The Animated Series, which premiered on September 5, 1992, and went on to co-create and produce Superman: The Animated Series (premiered in September 1996), The New Batman Adventures (premiered in September 1997), Batman Beyond (premiered in January 1999), and Static Shock (premiered in September 2000). He also served as producer on the feature-length Batman Beyond: Return of the Joker before taking the helm as creator and producer of the animated version of Justice League, which debuted in November 2001; the series continued in the form of Justice League Unlimited. Timm was also the producer and creator of Green Lantern: The Animated Series. Because of a mistake in the first season end credits of Teen Titans animated series, Timm is often mistaken for an executive producer, despite having very little to do with the production.[citation needed]

Although he shared character designer duties on Superman: The Animated Series and Justice League with James Tucker, Timm did virtually all the original character designs for Batman: The Animated Series himself (with the exceptions of Mr. Freeze and the Riddler, who were designed by Mike Mignola and the characters Man Bat and the Mad Hatter, who were designed by Kevin Nowlan).[citation needed]

DC universe animated series, including Justice League, Justice League Unlimited, Batman Beyond, and other DC-set works associated with Timm (and his collaborators') art styles, are often referred to by fans as "The Timmverse" of DC comics, relating to those series' distillation of popular storylines from the comic book versions or the outright introduction of new characters or relationships (such as Harley Quinn, alterations to The Question's personality and background, or Batman and Wonder Woman's romantic fling).

His 2008 project Batman: Gotham Knight is a departure from the "Timmverse" style, with Timm in a producer role collaborating with Japanese animators on a direct-to-DVD anthology that takes place between Batman Begins and The Dark Knight. In 2013, following the release of The Dark Knight Returns animated feature, Timm stepped down as DC animation supervising producer; James Tucker was named as his replacement. Though Timm still works at Warner Brothers, he will no longer be producing DC Universe Original Animated Movies.[3] Although in 2014, it was announced that Timm will be an executive producer on Justice League: Gods and Monsters, Justice League: Gods and Monsters Chronicles,[4] and Batman: The Killing Joke.

In 2013, he worked with Man of Steel director Zack Snyder, in creating a 75th anniversary short of Superman.

In 2014, he released Batman: Strange Days, an animated short celebrating the 75th anniversary of Batman and an homage to one of Hugo Strange's first appearances in the comic books.

Though Timm does not usually work as an actor, he has played several characters in the animated series he has been involved in. His cameos include the episode of Batman: The Animated Series, "Beware the Gray Ghost", playing the toy shop owner, as himself in the episode of The New Batman Adventures, "Holiday Knights", and as the leader of the Jokerz gang in Batman Beyond, which he joked he did under duress and was "Emmy Award-winning material". More recently,[when?] he appeared in an animated form in Batman: The Brave and the Bold episode "Legends of the Dark Mite" in a comic book convention parody scene, where he was wearing Joker's costume, along with Paul Dini wearing Harley Quinn's costume. Prior to that he was animated in The Batman, appearing as a mental patient in Arkham. He also played a guard in the direct-to-video animated film Batman Beyond: Return of the Joker.

While Timm is known primarily for his work in animation, his first ambition was to become a comic-book artist and has thus produced several one-shots and miniseries, mostly for DC Comics. In the 1980s, he made some mini-comics for Masters of the Universe.

In 1994, Timm and writer Paul Dini won the Eisner Award for Best Single Story for Batman Adventures: Mad Love. Timm won the same prize the next year as well, for Batman Adventures Holiday Special, (a one-shot with several Christmas-themed stories) with Dini, Ronnie del Carmen, and others. Later, Timm was involved with Batman Adventures and has also worked on Avengers and Vampirella. He is also a popular cover and pin-up artist.

In 2000, he did the art for an issue of DC's Vertigo imprint horror title, Flinch.

Bruce Timm co-created Harley Quinn (with Paul Dini), working from Dini's original design. Harley's popularity on television led to her inclusion in the mainstream DC Universe. In 2004, Timm and Dini (assisted by Shane Glines as inker) released a three-issue Harley and Ivy miniseries, which was in the works for years.

In 2005, Timm contributed artwork for two comics. One was a short story in Conan #18, titled "Conan's Favorite Joke". The other was a Black Canary short story in Birds of Prey #86.

In 2008, he provided the art work for a short two-page Harley Quinn origin story for Paul Dini's countdown.

Timm was featured in "Conan Gets Animated", a skit in the December 9, 2010 episode of the TBS late night talk show Conan, in which host Conan O'Brien enlisted his help in designing a new superhero, based on O'Brien's specifications. The superhero, who was designed to resemble O'Brien, included a typically muscular superhero body and costume with chest insignia, as well as idiosyncrasies such as an oven mitt, a jai alai glove, golf shoes, sock garters, and fishnet stockings.[5] One month later, O'Brien aired a clip on his show in which the character, named "The Flaming C", appears in Young Justice.[6]

In the summer of 2013, Timm provided the cover artwork for Adventures of Superman #4.[7]

Timm is married and has one daughter.[8]

Report a problem
Write to Bruce Timm at FanPal • 2020