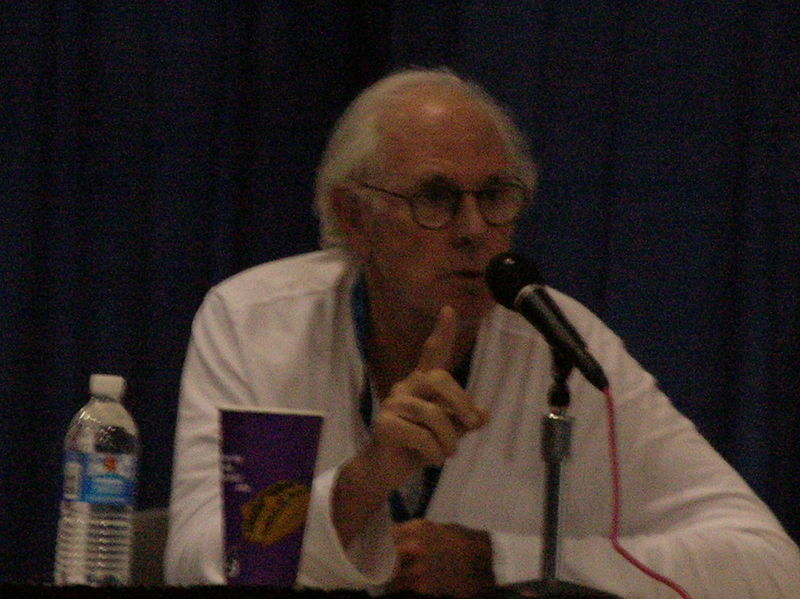 Bruce MacLeish Dern (born June 4, 1936) is an American actor, often playing supporting villainous characters of unstable nature. He was nominated for the Academy Award for Best Supporting Actor for Coming Home (1978) and the Academy Award for Best Actor for Nebraska (2013).[1] His other film appearances include The Cowboys (1972), Black Sunday (1977), Monster (2003), and The Hateful Eight (2015).

Dern was born in Chicago, the son of Jean (née MacLeish; 1908-1972) and John Dern (1903-1958), a utility chief and attorney.[2][3] He grew up in Kenilworth, Illinois.[4] His paternal grandfather, George, was a Utah governor and Secretary of War (he was serving in the latter position during the time of Bruce's birth). Dern's maternal grandfather was a chairman of the Carson, Pirie and Scott stores,[5][6] his maternal granduncle was poet Archibald MacLeish, and his maternal great-grandfather was Scottish-born businessman Andrew MacLeish. Dern's godfather was Illinois governor and two-time presidential nominee Adlai Stevenson II.[7][8] His ancestry includes Dutch, English, German and Scottish. He attended The Choate School (now Choate Rosemary Hall) and the University of Pennsylvania. Dern starred in the Philadelphia premiere of Waiting for Godot.
Read more...

Dern at the 2013 Cannes Film Festival

Dern appeared in an uncredited role in Wild River as Jack Roper, who is so upset with his friend for hitting a woman that he punches himself. He played the sailor in a few flashbacks with Marnie's mother in Alfred Hitchcock's Marnie. Dern played a murderous rustler in Clint Eastwood's Hang 'Em High and a gunfighter in Support Your Local Sheriff!. He also played cattle-thief Asa Watts, who murders John Wayne's character in The Cowboys (1972). Wayne warned Dern, "America will hate you for this." Dern replied, "Yeah, but they'll love me in Berkeley." Having played a series of villains, that same year he played against type as a sensitive ecologist in the science-fiction film Silent Running.

Dern was married to Marie Dawn Pierce from 1957 to 1959. He then married Diane Ladd in 1960. Their first daughter, Diane Elizabeth Dern (born November 29, 1960), died at eighteen months from head injuries after falling into a swimming pool on May 18, 1962. The couple's second daughter, Laura (born February 10, 1967), is also an actor. After his divorce from Ladd in 1969, Dern married Andrea Beckett.

Dern, Ladd, and their daughter Laura received adjoining stars on the Hollywood Walk of Fame on November 1, 2010.