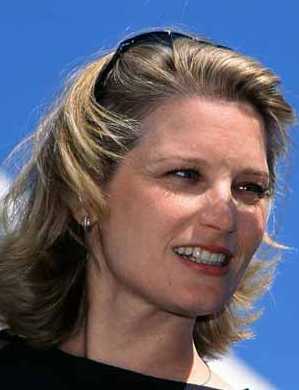 Fonda was nominated for a Golden Globe Award for Best Supporting Actress for playing Mandy Rice-Davies in the 1989 film Scandal and provided the voice for Jenna in the 1995 animated feature film Balto. She received an Emmy Award nomination for the 1997 TV film In the Gloaming, and a second Golden Globe Award nomination for the 2001 TV film No Ordinary Baby.

Fonda was born in Los Angeles, California, to a family of actors, including her grandfather Henry Fonda, father Peter Fonda, and her aunt Jane Fonda. Her mother, Susan Jane Brewer, is an artist.[1] She is named after actress Margaret Sullavan's daughter Bridget Hayward. Her maternal grandmother, Mary Sweet, married businessman Noah Dietrich.[2]

Fonda became involved with the theatre when she was cast in a school production of Harvey. She studied method acting at the Lee Strasberg Theatre Institute as part of New York University's Tisch School of the Arts acting program[4] and graduated from NYU in 1986.[5]

Earlier, she had made her film debut at the age of five in the 1969 movie Easy Rider as a child in the hippie commune that Peter Fonda and Dennis Hopper visit on their trek across the United States.[6] Her second (non-speaking) part was in the 1982 comedy Partners. In 1988, she got her first substantial film role in Scandal. That same year she appeared in You Can't Hurry Love and Shag.

Her breakthrough role was as a journalist in The Godfather Part III. After gaining additional work experience in a few theater productions she was cast in the lead in Barbet Schroeder's Single White Female, followed by a role in Cameron Crowe's ensemble comedy Singles (both 1992).

She starred in 1993's Point of No Return, an American remake of the 1990 French film Nikita. A review in the New Yorker cited her "provocative, taunting assertiveness." In 1997, she was on the same flight as Quentin Tarantino when he offered her the part of Melanie in Jackie Brown, which she undertook. She was also reportedly offered the lead, eponymous role in the television series Ally McBeal but turned it down to concentrate on her film career.[7]

She starred with Jet Li in the action thriller film Kiss of the Dragon in 2001, played the title role in the TV movie Snow Queen in 2002 and has not appeared in films since then.[8]

In 1986, Bridget met Eric Stoltz and, in 1990, they began dating. The relationship ended after eight years.[9]

On February 27, 2003, she suffered a serious car crash in Los Angeles that caused a fracture in her vertebra. In March of the same year, she became engaged to soundtrack composer and former Oingo Boingo frontman Danny Elfman, and they married in November.[10] They have a son named Oliver.[11]