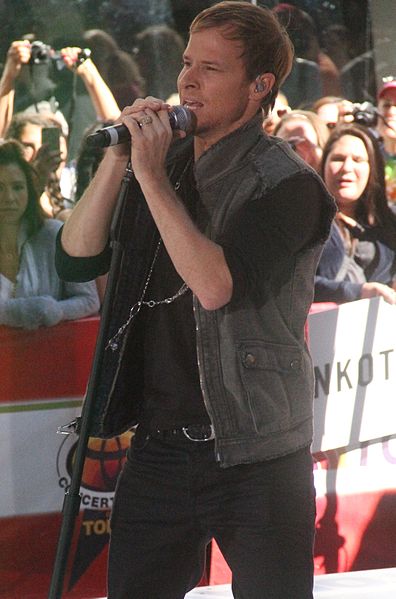 Brian Thomas Littrell (born February 20, 1975)[1] is an American singer, songwriter and actor, best known as a member of the Backstreet Boys. He is also a CCM singer and released a solo album, Welcome Home, in 2006. Brian has had five top 20 solo singles on the Christian charts in the US.

On April 10, 2015, Littrell was inducted into the Kentucky Music Hall of Fame along with his cousin and bandmate Kevin Richardson.[2]

Brian Thomas Littrell was born in Lexington, Kentucky, the son of Jackie (née Fox) and Harold Baker Littrell, Jr.[3][4] He has an older brother Harold, and is a cousin of fellow Backstreet Boys member Kevin.[5] Growing up, Littrell played in both Little League and the Babe Ruth League. He first started to sing in the choir of Porter Memorial Baptist Church in Lexington, and later started singing in his high school choir and acting in the school production of Grease as Roger at Tates Creek High School.[6][7] At 15, Littrell had aspirations to become a basketball player for the Kentucky Wildcats, but at just 1.73 m (5'7") he struggled with his height. Besides school, he worked at Long John Silver's while performing at weddings.[4][8] Music was always important to him, and he later planned on attending Cincinnati Bible College on a full scholarship to become a music minister.[4] While a junior in high school, Littrell changed plans and accepted the offer to join what would become the Backstreet Boys.

Littrell was born with a congenital heart defect and he had cardiac surgery in 1998 to correct the defect.[9] He later founded the Brian Littrell's "Healthy Heart Club" for kids, a non-profit organization that assists children with heart conditions through medical, financial and practical help.[10]

Kevin Richardson, his cousin, called Littrell, while he was in his high school history class, to join the Backstreet Boys on April 19, 1993. Littrell flew over to Orlando the next day and officially joined the group. In the beginning, there was no success in the United States, even though the first single had been a hit on Orlando radio stations. The band manager Lou Pearlman marketed the Backstreet Boys in Europe, where they became commercially successful in 1995. They became hugely popular in Europe, Asia, Latin America, and the United States in the late 1990s and the early 2000s. During this time they released four albums, Backstreet Boys, Backstreet's Back, Millennium and Black & Blue followed by a greatest hits album, The Hits: Chapter One. After a three-year gap, they released their comeback album, Never Gone followed by Unbreakable, This is Us and In a World Like This.

In 1997, Littrell was instrumental in bringing a lawsuit against the group's managers Lou Pearlman and Trans Continental claiming that Pearlman has not been truthful about the earnings made by the group. In the following year, McLean, Richardson and Dorough joined the lawsuit which eventually resulted in a number of settlements, details of which were not disclosed.[11][12] In October 2009, Littrell became infected with the H1N1 virus, causing the cancellation of the Backstreet Boys This Is Us promotional tour.[13][14]

For a long time, Littrell had wanted to record Christian music—what he calls "pop positive" music.[15] His first solo album, Welcome Home, was released on May 2, 2006, which, like the Backstreet Boys projects, is a Sony BMG release. The album peaked at No. 74 on the Billboard 200 and No. 3 on the Christian charts, and has sold over 100,000 copies.[16] Three singles were released from the album. The first, "Welcome Home (You)", reached No. 2 on the US Christian charts and No. 1 on Reach FM's Top 40 chart and the R&R Christian Inspirational Chart, staying there for three weeks. The second single was "Wish" and, in 2007, the third single, "Over My Head", was released. During this time, he maintained his duties as a member of the Backstreet Boys. In the summer of 2005, his solo single, "In Christ Alone", went to No. 1 on the Christian charts on July 4.

In July 2016, the Backstreet Boys performed on ABC's Greatest Hits.[18]

In 1997, Littrell met model and actress Leighanne Wallace at the video shoot for their single "As Long as You Love Me". He proposed on Christmas Eve night of 1999, and their engagement, along with the engagement of Kevin Richardson to Kristin Willits, was announced on MTV in February 2000.[19] Littrell and Wallace were married on September 2, 2000 at Peachtree Christian Church in Atlanta, Georgia.[20] Both are committed evangelical Christians. Together they have one son, Baylee Thomas Wylee Littrell, born on November 26, 2002.[21] Baylee appeared in the Broadway musical Disaster! in 2016.[22] The family has also recorded a Christmas EP together.

As of 2015, the family resides in Atlanta, Georgia.

Littrell was born with a heart murmur, for which he had corrective open heart surgery in 1998.[23]

In the 2015 documentary film Backstreet Boys: Show 'Em What You're Made Of, Littrell revealed his diagnosis of vocal tension dysphonia and dystonia (Diagnosed in 2011) . He works with doctors and speech therapists to help improve his condition.[24]

Littrell's son Baylee was diagnosed with Kawasaki disease in 2008.[23]

A devout Christian, Littrell has stated that he believes it is the duty of Christians to be open about their faith, saying, "I think as Christians we need to join hands and mount up together and lift God up and talk about our faith publicly and talk about all of the things God has done for us in our life to touch other people."[25] Littrell, who has been a born again Christian since the age of 8,[26] has said that he attributes his success in life to God, and that his faith has always been "the utmost important thing" in his life.[27]