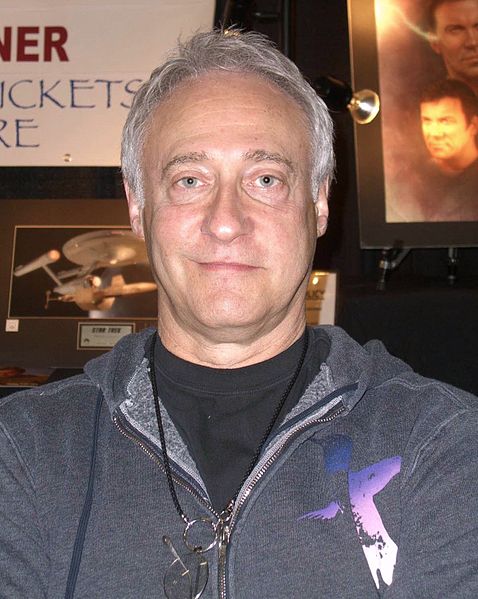 Brent Jay Spiner (/ˈspaɪnər/; born February 2, 1949) is an American actor, comedian, and singer best known for his portrayal of the android Lieutenant Commander Data in the television series Star Trek: The Next Generation and four subsequent films. In 1997, he won the Saturn Award for Best Supporting Actor for his portrayal of Data in Star Trek: First Contact, and was nominated in the same category for portraying Dr. Brackish Okun in Independence Day, a role he reprised in Independence Day: Resurgence. He has also enjoyed a career in the theatre and as a musician.

He attended Bellaire High School in Bellaire, Texas[citation needed] Spiner became active on the Bellaire speech team, winning the national championship in dramatic interpretation.[citation needed] He attended the University of Houston, where he performed in local theatre.[7]

Spiner moved to New York City in the early '70s,[8] where he became a stage actor, performing in several Broadway and off-Broadway plays, including The Three Musketeers and Stephen Sondheim's Sunday in the Park with George. He had a brief nonspeaking role in the film Stardust Memories, credited as "Fan in Lobby", the one with a Polaroid.

Spiner appeared as a media technician in "The Advocates", a second-season episode of the Showtime cable series The Paper Chase.[9] In 1984, he moved to Los Angeles, where he appeared in several pilots and made-for-TV movies. He played a recurring character on Night Court, Bob Wheeler, patriarch of a rural family. In 1986, he played a condemned soul in "Dead Run", an episode of the short-lived revival of Rod Serling's series The Twilight Zone on CBS. He made two appearances in season three (1986) of the situation comedy Mama's Family, playing two different characters. Spiner's first and only starring film role was in Rent Control (1984). In the Cheers episode "Never Love a Goalie, Part II", he played acquitted murder suspect Bill Grand. Spiner also appeared in the Tales from the Darkside episode, "A Case of the Stubborns", as a preacher. He portrayed Jim Stevens in the made-for-TV movie Manhunt for Claude Dallas.

In 1987, Spiner started his 15-year run portraying Lieutenant Commander Data on Star Trek: The Next Generation, which spanned seven seasons and four feature films. As a main character, he appeared in all but one of the series' 178 episodes; he was not in the episode "Family". He reprised his role in the spin-off films Star Trek Generations (1994), Star Trek: First Contact (1996), Star Trek: Insurrection (1998), and Star Trek: Nemesis (2002). Although billed as the final Trek movie for the TNG cast, the ambiguous ending of Star Trek: Nemesis suggested a possible avenue for the return of Data. However, Spiner opined that he was too old to continue playing the part, as Data does not age, whereas Spiner had already aged considerably during the years in which he played the role.[10][11] In addition to the series and films, he voiced his character in several Star Trek video games, such as Star Trek: Generations, Star Trek: The Next Generation - A Final Unity, Star Trek: Hidden Evil, and Star Trek: Bridge Commander.[12] After appearing in several episodes as Arik Soong, the ancestor of Data's creator, Dr. Noonien Soong, Spiner also recorded dialogue as Data that was heard in the final episode of Star Trek: Enterprise, "These Are the Voyages...", which aired in 2005, bringing the Star Trek TV franchise Spiner had helped establish 18 years earlier to a close.

In 1991, Spiner recorded an album of 1940s pop standards entitled Ol' Yellow Eyes Is Back, the title of which was a play on the yellow contact lenses Spiner wore as Data, and the title of a Frank Sinatra record, Ol' Blue Eyes Is Back. In 1997, he returned to Broadway, playing John Adams in the Roundabout Theatre Company revival of the musical 1776. The production was nominated for a Tony Award. A cast recording was released of the revival production.[13]

Spiner has appeared in the television series Deadly Games, The Blacklist, Dream On, Frasier, Friends, Gargoyles, Law & Order: Criminal Intent, Mad About You and The Outer Limits. In the series The Big Bang Theory and Joey, he appeared as himself. He has acted in the movies The Aviator, Dude, Where's My Car?, I Am Sam, Independence Day, Independence Day: Resurgence, The Master of Disguise,[14] Out to Sea, Phenomenon, The Ponder Heart and South Park: Bigger, Longer and Uncut.[15] His television-movie appearances during this period include the 2000 musical Geppetto and the role of Dorothy Dandridge's manager and confidant, Earl Mills, in the HBO production Introducing Dorothy Dandridge.

In 2004, Spiner returned to Star Trek when he appeared as Dr. Arik Soong, an ancestor of Data's creator Dr. Noonien Soong, whom he also played, in a three-episode story arc of Star Trek: Enterprise: "Borderland", "Cold Station 12", and "The Augments". He also briefly reprised the role of Data for the series, providing a voice-only cameo in the Enterprise finale "These Are the Voyages...". Spiner guest-starred in Friends as a man who interviews Rachel for Gucci, and later cameoed as himself in the Friends spin-off Joey.

In 2005, Spiner appeared in a short-lived science-fiction television series Threshold, which was canceled in November of that year after 13 episodes. In 2006, he appeared in a feature film comedy, Material Girls, with Hilary and Haylie Duff.

During the 10th season of the situation comedy Frasier, in the episode "Lilith Needs a Favor", Spiner made two brief cameos as a fellow airline passenger with Frasier Crane's ex-wife, Lilith Sternin.

In March 2008, Spiner performed alongside Maude Maggart in a radio show/musical, Dreamland, which was released as a CD album.[16]

In 2008, Spiner played Dr. Strom in the feature film parody Superhero Movie. In February 2009, he played William Quint in "The Juror #6 Job", an episode of the drama series Leverage directed by his Next Generation co-star Jonathan Frakes. That same year, he voiced himself in the Family Guy episode "Not All Dogs Go to Heaven".

Spiner with William Shatner and LeVar Burton in July 2010

In 2010, Spiner and fellow Star Trek: The Next Generation star LeVar Burton appeared on TWiT.tv's coverage of the Consumer Electronics Show.[17]

In April 2011, Spiner began starring in Fresh Hell, a comic webseries in which he plays a version of himself, attempting to put his career back together after falling out of the limelight.[18][19]

He appeared as Dr. Kern in the September 12, 2011, episode of the Syfy channel program Alphas entitled "Blind Spot". In October 2011, he appeared as himself in the episode "The Russian Rocket Reaction" of The Big Bang Theory. The day after his guest appearance, it was announced that Spiner would guest-star in the Young Justice episode "Revelation", providing the voice of the Joker.[20] Spiner has also guest-starred on the Syfy program Warehouse 13 as Brother Adrian in the third and fourth seasons. In episode seven of season four, the character Pete Lattimer jokingly describes another obsessively tidy character in this episode as "Commander Data".

Spiner's web site is at therealbrentspiner.com. He selected that domain name because someone else bought the domain name brentspiner.com before he could do so, and he was not amenable to paying the price the owners demanded for it, which Spiner called "inflated".[21]