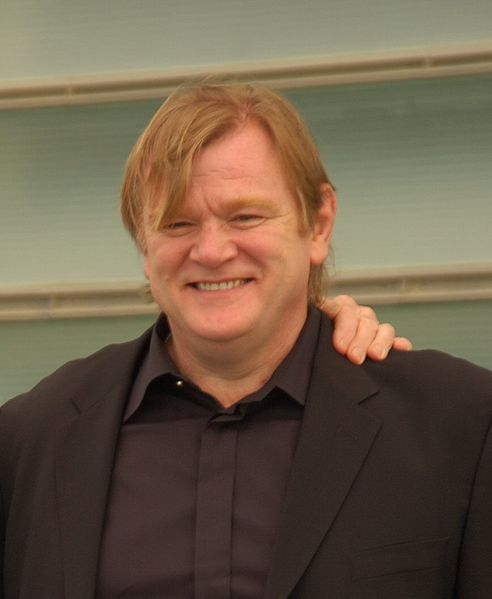 Brendan Gleeson (born 29 March 1955) is an Irish actor and film director. He is the recipient of three IFTA Awards, two BIFA Awards, and an Emmy Award and has been nominated twice for a BAFTA Award and thrice for a Golden Globe Award.

He is also the father of actors Domhnall Gleeson and Brian Gleeson.

Gleeson was born in Dublin, the son of Pat and Frank Gleeson.[1] Gleeson has described himself as having been an avid reader as a child.[2] He received his second level education at St Joseph's CBS in Fairview, Dublin where he was a member of the school drama group. After training as an actor, he worked for several years as a secondary school teacher of Irish and English at the now defunct Catholic Belcamp College in North County Dublin, which closed in 2004.[3][4] He was working simultaneously as an actor while teaching, doing semi-professional and professional productions in Dublin and surrounding areas. He left the teaching profession to commit full-time to acting in 1991.

In an NPR interview to promote Calvary, he revealed that he was abused by a Christian Brother, saying, "I remember a particular Christian Brother dropped the hand on me at one point. It wasn't very traumatic and it wasn't at all sustained, it was just one of these things where something odd happened."[5]

As a member of the Dublin-based Passion Machine, Gleeson appeared in several of the theatre company's early and highly successful plays such as Wasters (1985), Brownbread (1987) and Home (1988). He has also written three plays for Passion Machine: The Birdtable (1987) and Breaking Up (1988), both of which he directed, and Babies and Bathwater (1994) in which he acted.[6] Among his other Dublin theatre work are Patrick Süskind's one-man play The Double Bass and John B. Keane's The Year of the Hiker.

Gleeson started his film career at the age of 34.[7] He first came to prominence in Ireland for his role as Michael Collins in The Treaty, a television film broadcast on RTÉ One, and for which he won a Jacob's Award in 1992. He has acted in such films as Braveheart, I Went Down, Michael Collins, Gangs of New York, Cold Mountain, 28 Days Later, Troy, Kingdom of Heaven, Lake Placid, A.I. Artificial Intelligence, Mission: Impossible 2, and The Village. He won critical acclaim for his performance as Irish gangster Martin Cahill in John Boorman's 1998 film The General.

In 2003, Gleeson was the voice of Hugh the Miller in an episode of the Channel 4 animated series Wilde Stories.[8]

While Gleeson portrayed Irish statesman Michael Collins in The Treaty, he later portrayed Collins' close collaborator Liam Tobin in the film Michael Collins with Liam Neeson taking the role of Collins.[9] Gleeson later went on to portray Winston Churchill in Into the Storm. Gleeson won an Emmy Award for his performance. Gleeson played Hogwarts professor Mad-Eye Moody in the fourth, fifth and seventh Harry Potter films. His son Domhnall played Bill Weasley in the seventh and eighth films.

Gleeson provided the voice of Abbot Cellach in The Secret of Kells, an animated film co-directed by Tomm Moore and Nora Twomey of Cartoon Saloon which premiered in February 2009 at the Jameson Dublin International Film Festival.[10]

Gleeson starred in the short film Six Shooter in 2006, which won an Academy Award for Best Live Action Short Film. This film was written and directed by Martin McDonagh who also wrote and directed In Bruges in 2008. The film, and Gleeson's performance, enjoyed huge critical acclaim, earning Gleeson several award nominations, including his first Golden Globe nomination. In the movie, Gleeson plays a mentor-like figure for Colin Farrell's hitman. In his review of In Bruges, Roger Ebert described the elder Gleeson as having a "noble shambles of a face and the heft of a boxer gone to seed."[11]

Gleeson will be making his directorial debut in a film adaptation of Flann O'Brien's novel At Swim-Two-Birds. The Irish production company Parallel Pictures will produce the film with a budget of $11 million. Colin Farrell, Gabriel Byrne, and Cillian Murphy have been attached to star in the film, which was originally set for release in 2010.[12] In October 2009, however, Gleeson expressed concern that the Irish Film Board's budget might be reduced given the state of the Irish economy and that At Swim-Two-Birds might fall through.[13] Gleeson confirmed in July 2011, that he has secured funding for the project. He described the writing of the script as tortuous, saying that it has taken fourteen drafts so far.[14]

In July 2012, he started filming The Grand Seduction, with Taylor Kitsch, a remake of Jean-François Pouliot's French-Canadian La Grande Séduction (2003) directed by Don McKellar; the film was released in 2013.[15] In 2016, he appeared in the video game adaptation Assassin's Creed and Ben Affleck's crime drama Live by Night. In 2017 he finished Psychic, a short he directed and starred in.[16]

Gleeson is a fiddle and mandolin player, with an interest in Irish folklore.[2] He played the fiddle during his role in Cold Mountain, Michael Collins and also The Grand Seduction, and also features on Altan's 2009 live album.[17]

He has been married to Mary (née Weldon) since 1982. He has four sons; Domhnall, Brían, Fergus, and Rúairí. Domhnall and Brían are also actors.[18] Gleeson speaks fluent Gaelic and is an advocate of the promotion of the Irish (Gaelic) language. Gleeson is a fan of Football League Championship team Aston Villa, as is his son Domhnall.[19]