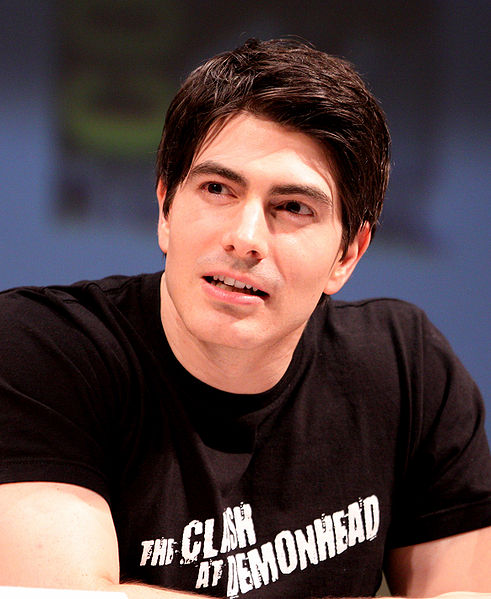 Brandon James Routh (born October 9, 1979) is an American actor. He grew up in Iowa before moving to Los Angeles to pursue an acting career and subsequently appeared on multiple television series throughout the early 2000s including Gilmore Girls. In 2006, he portrayed the titular superhero of the film Superman Returns. He also had a recurring role in the TV series Chuck as Daniel Shaw. Following this, he had notable supporting roles in the films Zack and Miri Make a Porno and Scott Pilgrim vs. the World. In 2014, he began a recurring role on Arrow as Ray Palmer / The Atom, which spun off into a guest role on The Flash and followed by a starring role on Legends of Tomorrow.

Routh, the third of four children, was born on October 9, 1979 in Norwalk, Iowa, the son of Catherine LaVonne (née Lear), a teacher, and Ronald Wayne Routh, a carpenter.[1][2] Routh was raised in a Methodist family,[3] and has English, Scottish, German, and distant Dutch ancestry.[4][5] Routh grew up in Norwalk, approximately 100 miles (160 km) south of Woolstock, the birthplace of George Reeves, the first actor to play Superman on television.[1] During his childhood, Routh thought a full-time acting career was unrealistic, citing his small-town background.[1] In his spare time, he played the trumpet and the piano.[1] Routh attended Norwalk High School,[6] where he played sports and participated in music and theatre. He has described himself as a "momma's boy" and not "the most popular kid" during his school years.[7] Routh has also noted that during his younger years, he was fond of the Superman films and comic books.[8]

Routh attended the University of Iowa for a year, aspiring to be a writer.[1] During this time, he modelled and acted in order to earn his tuition fee.[1] Routh has said he was often told that he bore a physical resemblance to Christopher Reeve, who had previously portrayed Superman in a film series.[1] His former manager signed him on because of the resemblance, telling him that he thought Routh would be cast as Superman if there was another film in the series.[7]

In 1999, Routh left the University and moved to Manhattan and then Los Angeles, where he pursued a full-time acting career, first appearing as an extra in Christina Aguilera's music video for "What a Girl Wants".[6] He was cast in his first acting role in 1999, in an episode of the short-lived ABC television series, Odd Man Out. In 2000, he had a four-episode role on the third season of MTV's nighttime soap opera, Undressed. Routh subsequently appeared on the WB's Gilmore Girls (in a February 2001 episode, "Concert Interruptus", playing an attendee of a Bangles concert), and earned steady work on the soap opera One Life to Live, playing Seth Anderson from May 23, 2001 until April 17, 2002.

Prior to Routh's casting as Superman in the film Superman Returns, Warner Bros. had spent over a decade developing a plan to relaunch the franchise entitled Superman Flyby, with possible stars including name actors Nicolas Cage, Josh Hartnett, Brendan Fraser, Tom Welling, Paul Walker, Henry Cavill (who eventually became Superman in 2013's Man of Steel, in 2016's Batman v Superman: Dawn of Justice and 2017’s Justice League), James Marsden, Ashton Kutcher, Keanu Reeves, Will Smith and James Caviezel[9] and planned directors including Tim Burton, Wolfgang Petersen, McG, Brett Ratner and Shekhar Kapur. When director Bryan Singer came aboard the project, however, he insisted an unknown actor be cast in the part, in the tradition of the casting of the best-known film Superman, Christopher Reeve.

Routh, then 24, had previously already auditioned for director McG[1] and was spotted by Singer after he viewed Routh's videotaped audition.[9] Singer, who since noted Routh as being the embodiment of "our collective memory of Superman,"[10] was impressed by his resemblance to the comic book icon and found the actor's humble Midwestern roots perfect for the role, as well as his "combination of vulnerability and confidence" Singer said reminded him of Christopher Reeve.[6] Singer decided to cast Routh after the two met on August 13, 2004, but did not tell Routh until two months later, when Routh's casting was announced in October 2004,[9] making him an "instant celebrity".[1] Before filming began, Routh bulked up for the role, gaining 22 pounds to reach a high of 218 pounds. Filming for Superman Returns began in Sydney in February 2005. The film was released in the U.S. on June 28, 2006 and impressed most critics, but was a box office disappointment, grossing only $200 million in the US compared to its estimated budget of $270 million.[11] Routh was signed on to appear in two potential sequels to the film, but due to mediocre box office results it never happened.

Routh has commented he feared his performance would too closely resemble that of Christopher Reeve. Routh has said that he hopes to "remind people of Christopher while at the same time making them feel like they're seeing a totally new Superman."[12] Reviews of Routh's performance were generally positive, with Newsweek noting he "effortlessly lays claim to the iconic role."[13] On the other hand, film critic Roger Ebert noted that he thinks "Routh lacks charisma as Superman, and I suppose as Clark Kent, he isn't supposed to have any."[14]

At the 2006 Spike TV Awards, Routh won the award of "Best Superhero" as Superman in Superman Returns, beating out among others, Hugh Jackman as Wolverine.

In August 2008, Warner Bros. officially announced they intended to reboot the Superman franchise. Routh was still set to reprise the role, according to DC Comics president Paul Levitz. In 2009, however, Routh's contract to play Superman in another film expired, but he said at the time that he would like to return if given the chance.[15] However, British actor Henry Cavill was cast to play Superman in the reboot of the series, Man of Steel.

After the release of Superman Returns, Routh signed on to play CIA agent John Clark in Without Remorse under the direction of John Singleton with a screenplay by Stuart Beattie. Routh would be the third actor to portray the character after Willem Dafoe and Liev Schreiber. The film was intended for a late-2007/early-2008 release. However, Paramount Pictures put the film into turnaround. Routh's future participation on the project is unknown.

Routh appeared in the ensemble film Life is Hot in Cracktown and the independent drama Fling (formerly titled Lie to Me), co-starring his wife Courtney Ford.

Routh was signed to star in The Informers, a film based on the Bret Easton Ellis novel of the same name. He joins Kim Basinger, Amber Heard, and Billy Bob Thornton,[16] but his scenes ended up scrapped with the decision to excise the "vampire" subplot from the film entirely.[17]

In January 2009, Routh was officially cast to play Todd Ingram in Scott Pilgrim vs. the World which was directed by Edgar Wright, based on the Scott Pilgrim series by Canadian artist Bryan Lee O'Malley. His character is an arrogant, narcissistic bass player who derives psychic powers from his vegan lifestyle, and is the third of the seven Evil Exes the title character must fight.

Routh plays Daniel Shaw in season 3 of spy series Chuck, in a recurring, supporting role. He again played this character in the shows fifth season.

He portrayed Dylan Dog in the 2011 film Dylan Dog - Dead of Night.[18] The movie is based on the Italian comic series created by Tiziano Sclavi.[19]

On February 22, 2012, it was announced that Routh had been cast in David Kohan and Max Mutchnick's (the creators of Will & Grace), new CBS half-hour, multicamera comedy pilot, Partners. He played Michael Urie's character's steady partner, alongside David Krumholtz and his Table for Three co-star Sophia Bush.[20] The series was cancelled after only six episodes had aired.

In 2013, Routh voiced David "Hesh" Walker in the video game Call of Duty: Ghosts. Routh has since been appeared in one episode of The Millers and multiple episodes of Chosen and Enlisted in 2014.

On July 7, 2014, it was reported that Routh would once again play a superhero for DC Comics as Ray Palmer / The Atom on The CW's Arrow. He was a recurring character throughout the show's third season, which premiered October 8, 2014.[21]

In January 2015, Arrow's co-creator and executive producer Greg Berlanti stated that they were in the midst of "very early" preliminary talks for an additional spin-off series centered on Ray Palmer/The Atom.[22][23]

In February 2015, it was announced that a spin-off was in development that would co-star Routh as The Atom; along with Wentworth Miller, Victor Garber and Caity Lotz.[24] The show, DC's Legends of Tomorrow premiered in January 2016.

Routh knew actor Kal Penn, a co-star in Superman Returns, for several years during the time he lived in Los Angeles.[29] Routh and Penn were both also featured in The Lonely Island's Awesometown MTV pilot music video "The Avon Lady".

Routh's sister, Sara, has a musical track entitled "You're Never Gone" on Sound of Superman, the companion soundtrack of the film. Routh is a fan and player of the video game World of Warcraft.[30] During the 2008 Presidential Election, Routh spoke at an Iowa rally in support of Democratic candidate Barack Obama.[31]