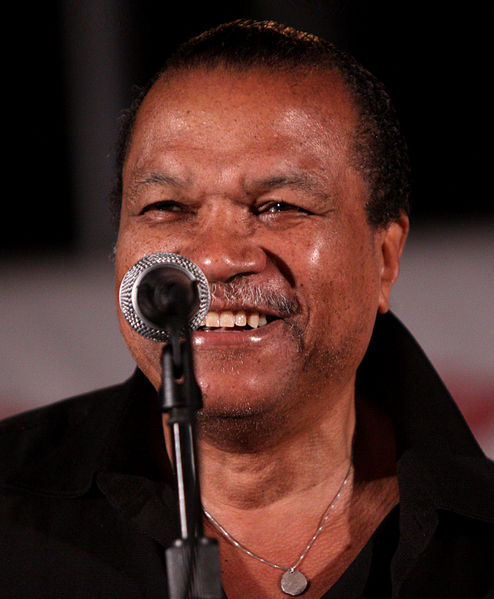 William December "Billy Dee" Williams Jr. (born April 6, 1937) is an American actor, artist, and singer. Williams is best known for his role as Lando Calrissian in the Star Wars film franchise, first appearing in The Empire Strikes Back in 1980. Williams has also appeared in critically acclaimed films like Brian's Song (1971), Lady Sings the Blues (1972), Mahogany (1975), Nighthawks (1981), and Batman (1989), in which he portrayed Harvey Dent. In August 2018 it was finally announced that Williams would return as Lando Calrissian in Star Wars: Episode IX after his character's absence from previous episodes became conspicuous.[1]

Williams was born in New York City, the son of Loretta Anne (1915-2016),[citation needed] a West Indian-born elevator operator from Montserrat, and William December Williams, Sr. (1910-2008), an African-American caretaker from Texas.[2][3] He has a twin sister, Loretta, and grew up in Harlem, where he was raised by his maternal grandmother while his parents worked at several jobs. Williams graduated from The High School of Music & Art (later merged with the High School of Performing Arts to become the Fiorello H. LaGuardia High School of Music & Art) in Manhattan, where he was a classmate of Diahann Carroll, who would later play the wife of his character Brady Lloyd on the 1980s prime-time soap opera Dynasty.
Read more...

Williams first appeared on Broadway in 1945 in The Firebrand of Florence.[4] He returned to Broadway as an adult in 1960 in the adaptation of The Cool Word. He appeared in A Taste of Honey in 1961. A 1976 Broadway production, I Have a Dream, was directed by Robert Greenwald and starred Williams as Martin Luther King Jr.[5] His most recent Broadway appearance was in August Wilson's Fences, as a replacement for James Earl Jones in the role of Troy Maxson in 1988.[6]

Williams at the Phoenix Comicon, 2011.

Williams made his film debut in 1959 in The Last Angry Man, opposite Paul Muni, in which he portrayed a delinquent young man. He rose to stardom after starring in the critically lauded blockbuster biographical television movie, Brian's Song (1971), in which he played Chicago Bears star football player Gale Sayers, who stood by his friend Brian Piccolo (played by James Caan), during Piccolo's struggle with terminal cancer. The film was so popular that it was given a theatrical release. Both Williams and Caan were nominated for Emmy Awards for best actor for their performances.[citation needed] Having broken through, Williams became one of America's most well-known black film actors of the 1970s, after starring in a string of critically acclaimed and popular movies, many of them in the "blaxploitation" genre. In 1972, he starred as Billie Holiday's husband Louis McKay in Motown Productions' Holiday biopic Lady Sings the Blues. The film was a box office blockbuster, becoming one of the highest-grossing films of the year and received five Academy Award nominations. Diana Ross starred in Lady Sings the Blues opposite Williams; Motown paired the two of them again three years later in the successful follow-up project Mahogany.

Beginning in 1980, Williams portrayed Lando Calrissian in The Empire Strikes Back and Return of the Jedi. Calrissian's charm proved to be popular with audiences. He reprised the role when he lent his voice for the character in the 2002 video game Star Wars Jedi Knight II: Jedi Outcast, as well as the audio dramatisation of Dark Empire, the National Public Radio adaptation of The Empire Strikes Back, two productions for the Star Wars: Battlefront series: Star Wars: Battlefront II and Star Wars Battlefront: Elite Squadron, in two episodes of the animated TV series Star Wars: Rebels and will reprise the role again on the big screen in the as yet untitled Star Wars: Episode IX. Between his appearances in the Star Wars films, he starred alongside Sylvester Stallone as a cop in the 1981 thriller Nighthawks.

He co-starred in 1989's Batman as district attorney Harvey Dent, a role that was planned to develop into Dent's alter-ego, the villain Two-Face, in sequels. However, that never came to pass; he was set to reprise the role in the sequel Batman Returns, but his character was deleted and replaced with villain Max Shreck. When Joel Schumacher stepped in to direct Batman Forever, where Two-Face was to be a secondary villain, Schumacher decided to hire Tommy Lee Jones for the role.[7] There was a rumor that Schumacher had to pay Williams a fee in order to hire Jones, but Williams said that it was not true: "You only get paid if you do the movie. I had a two-picture deal with Star Wars. They paid me for that, but I only had a one picture deal for Batman."[8] Williams eventually voiced Two-Face in the 2017 film The Lego Batman Movie.[9]

After The Walt Disney Company acquired ownership of Lucasfilm in 2012, plans for a sequel trilogy to the Star Wars films were announced. On April 29, 2014, Disney announced a cast list for Star Wars: The Force Awakens, set 30 years after Return of the Jedi. Some fans were disappointed with Calrissian's absence.[10] However, it was announced in July 2018 that he was cast in Episode IX.[11][12]

Williams's television work included a recurring guest-starring role on the short-lived show Gideon's Crossing. He is also well known for his appearance in advertisements for Colt 45 (a brand of malt liquor) in the 1980s and early 1990s, for which he received much criticism. Williams responded indifferently to the criticism of his appearances in the liquor commercials. When questioned about his appearances, he allegedly replied by saying, "I drink, you drink. Hell, if marijuana was legal, I'd appear in a commercial for it."[13]

In the 1984-1985 season of Dynasty, he played Brady Lloyd opposite Diahann Carroll. Williams was paired with actress Marla Gibbs on three situation comedies: The Jeffersons (Gibbs's character, Florence, had a crush on Williams and challenged him on everything because she thought he was an imposter); 227 (her character, Mary, pretending to be royalty, met Williams at a banquet); and The Hughleys (Gibbs and Williams portrayed Darryl's parents). In 1992, he portrayed Berry Gordy in The Jacksons: An American Dream. In 1993, Williams had a guest appearance on the spin-off to The Cosby Show, A Different World, as Langston Paige, a grumpy landlord, in a backdoor pilot for his own series. He appeared as himself on Martin where he provided Martin with advice on getting back together with Gina.

Williams made a special guest appearance on the hit sketch comedy show In Living Color in 1990. He portrayed Pastor Dan in an episode of That '70s Show. In this episode entitled "Baby Don't You Do It" (2004), his character is obsessed with Star Wars, and uses this to help counsel Eric Forman (himself a Star Wars fan) and Donna Pinciotti about their premarital relationship. Williams made a cameo appearance as himself on the television series Lost in the episode "Exposé". He also appears regularly on short clips on the Jimmy Kimmel Live! as a semi-parody of himself. In February 2006, he guest starred as himself in the season 5 episode "Her Story II" of Scrubs, where he plays the godfather of Julie (Mandy Moore). Turk hugs him, calling him "Lando", even though he prefers to be called Billy Dee. Williams played Toussaint Dubois for General Hospital: Night Shift in 2007 and 2008. Williams reprised his role as Toussaint on General Hospital beginning in June 2009. Also in 2009, he took on the role of the voice of Admiral Bitchface, the head of the military on the planet Titan in the Adult Swim animated series Titan Maximum. In July 2010, Williams appeared in the animated series The Boondocks, where he voiced a fictionalized version of himself in the episode "The Story of Lando Freeman".

In February 2011, Williams appeared as a guest star on USA Network's White Collar as Ford, an old friend of Neal Caffrey's landlady June, played by Diahann Carroll. In February 2012, Williams was the surprise guest during a taping of The Oprah Winfrey Show spotlighting Diana Ross. Ross and Williams were reunited after having not seen each other in 29 years. In October 2012, Williams appeared as a guest star on NCIS in Season 10 Episode 5 titled "Namesake", as Gibbs' namesake and his father's former best friend, Leroy Jethro Moore. On January 9, 2013, Williams appeared as himself in a cameo role on Modern Family, Season 4 / Episode 11 "New Year's Eve".

It was announced on March 4, 2014 that Williams would be competing on the 18th season of Dancing with the Stars. He partnered with professional dancer Emma Slater.[14] The couple had to withdraw from the competition on the third week due to an injury to Williams's back. In spite of his absence from Episode VII, Williams returned to the role of Lando Calrissian in a 2015 episode of Star Wars Rebels.[15]

In 1961, Williams ventured into the music industry when he recorded a jazz LP produced by Prestige Records entitled Let's Misbehave, on which he sang several swing standards. The album, which was a commercial success at the time, made Williams eligible for an appearance in the legendary Motown 25: Yesterday, Today, Forever (1983).

Williams voiced Lando Calrissian in the video game Star Wars Jedi Knight II: Jedi Outcast and Star Wars Battlefront as well as the spin-off Star Wars Battlefront: Elite Squadron (however, the Battlefront appearances were archive footage and his voice-appearance in Elite Squadron is left uncredited or unknown). He also played a live-action character, GDI Director Redmond Boyle, in the game Command & Conquer 3: Tiberium Wars, which was released in March 2007. This made him the second former Star Wars actor to appear in a Command & Conquer game, with the first being James Earl Jones as GDI General James Solomon in Command & Conquer: Tiberian Sun. Williams voiced Lando Calrissian in 2015's Star Wars: Battlefront for the DLC pack Bespin. In the 2016 game Let It Die, Williams voices Colonel Jackson, who acts as the 2nd major boss players face.

In 2008, Williams reprised his role as Lando Calrissian to appear in a video on Funny or Die in a mock political ad defending himself for leader of the Star Wars galaxy against vicious attack ads from Emperor Palpatine.[16] Williams is currently a cast member of Diary of a Single Mom, a web based original series directed by award-winning filmmaker Robert Townsend. The series debuted on PIC.tv in 2009.[17]

Before he began acting, Williams attended the National Academy of Fine Arts and Design in New York. In the late 1980s, he resumed painting. Some of his work can be seen at his online gallery BDW World Art. He has had solo exhibitions in various galleries around the United States, and his work hangs in the National Portrait Gallery, the Smithsonian Institution and the Schomburg Museum. The covers of the Thelonious Monk Competition programs since 1990 are by him.

Williams has been married three times. His first marriage was to Audrey Sellers in 1959. They were divorced some years later, after which he apparently became quite depressed: " there was a period when I was very despondent, broke, depressed, my first marriage was on the rocks." They have a son, Corey Williams.[18] In 1968, Williams married model and actress Marlene Clark in Hawaii. Their marriage lasted only two years and they divorced in 1971.[19][20][21][22][23][24][25] Williams married Teruko Nakagami on December 27, 1972. She brought a daughter, Miyako (b. 1962), from her previous marriage to musician Wayne Shorter. They have a daughter Hanako (b. 1973). They filed for divorce in 1993,[26] but were reported to have reconciled in 1997.[27][28]

Williams was arrested on January 30, 1996 after allegedly beating his live-in girlfriend, whom the police did not identify.[29] He was freed from custody the following day after posting a US$50,000 bail.[30] Williams stated through his attorney that he expected to be fully exonerated of the charges.[31] The Los Angeles city attorney's office filed misdemeanor charges of spousal battery and dissuading a witness against Williams.[32] The woman, identified only as "Patricia", later stated the incident was her fault and that she hoped the police would drop the case.[33] In a plea bargain agreement to dismiss the charges, Williams was ordered to undergo 52 counseling sessions.[34]