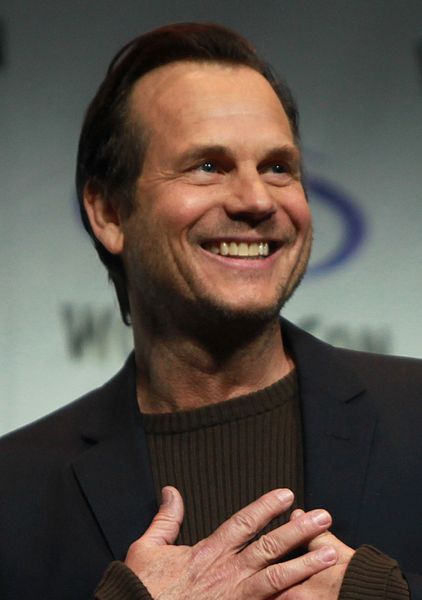 Paxton was born and raised in Fort Worth, Texas, the son of Mary Lou (née Gray) and John Lane Paxton. His father was a businessman, lumber wholesaler, museum executive, and occasional actor. His mother was Roman Catholic, and he and his siblings were raised in her faith. Paxton was in the crowd when President John F. Kennedy emerged from the Hotel Texas on the morning of his assassination on November 22, 1963. Photographs of an 8-year-old Paxton being lifted above the crowd are on display at the Sixth Floor Museum in Dallas, Texas. On the Marc Maron podcast, Paxton revealed at the age of 13 he contracted rheumatic fever which had damaged his heart. During his teens, Paxton worked as a paper delivery boy with Mike Muir.

Among Paxton's earliest roles were a minor role as a punk thug in The Terminator (1984), a supporting role as the lead protagonist's bullying older brother Chet in John Hughes' Weird Science (1985), and Private Hudson in Aliens (1986).

He directed several short films, including the music video for Barnes & Barnes' novelty song "Fish Heads", which aired during Saturday Night Live's low-rated 1980-1981 season. He was cast in a music video for the 1982 Pat Benatar song "Shadows of the Night", in which he appeared as a Nazi radio officer.

In 1982, Paxton and his friend Andrew Todd Rosenthal formed a new wave musical band called Martini Ranch. The band released its only full length album, Holy Cow, in 1988 on Sire Records. The album was produced by Devo member Bob Casale and featured guest appearances by two other members of that band. The music video for the band's single "Reach" was directed by James Cameron.

Paxton directed the feature films Frailty (2001), in which he starred, and The Greatest Game Ever Played (2005). Four years after appearing in Titanic, he joined Cameron on an expedition to the actual Titanic. A film about this trip, Ghosts of the Abyss, was released in 2003. He also appeared in the music video for Limp Bizkit's 2003 song "Eat You Alive" as a sheriff.

His highest profile television performances received much positive attention, including his lead role in HBO's Big Love (2006-2011), for which Paxton received three Golden Globe Award nominations. Paxton also received good reviews for his performance in the History Channel's miniseries Hatfields & McCoys (2012), for which he was nominated for an Emmy Award, alongside co-star Kevin Costner.

In 2014, he played the role of the villainous John Garrett in Agents of S.H.I.E.L.D., and a supporting role in Edge of Tomorrow (2014). He starred alongside Jon Bernthal, Rose McGowan, and John Malkovich as a playable character in the 2014 video game Call of Duty: Advanced Warfare (downloadable "Exo Zombies" mode). In February 2016, Paxton was cast as Detective Frank Roarke for Training Day, a crime-thriller television series set 15 years after the events of the eponymous 2001 movie; it premiered a year later.

Paxton was married from 1979 to 1980 to Kelly Rowan. In 1987, he married Louise Newbury; together, they had two children, James and Lydia.

In February 2017, a few weeks prior to having cardiac surgery, and ultimately his death, Paxton stated in an interview with Marc Maron that he had a damaged heart valve, the result of suffering from rheumatic fever in his youth.

On February 25, 2017, Paxton died at the age of 61 from what was initially reported as being complications following heart surgery. A representative for the family released the following statement to the press on February 26:

It is with heavy hearts we share the news that Bill Paxton has passed away due to complications from surgery. A loving husband and father, Bill began his career in Hollywood working on films in the art department and went on to have an illustrious career spanning four decades as a beloved and prolific actor and filmmaker. Bill's passion for the arts was felt by all who knew him, and his warmth and tireless energy were undeniable. We ask to please respect the family's wish for privacy as they mourn the loss of their adored husband and father.

On March 6, 2017, Paxton's cause of death was officially revealed as being a stroke resulting from complications from his heart and aorta surgery that he underwent on February 14, 2017.

He is interred in the Forest Lawn Memorial Park.

Report a problem
Biography of Bill Paxton at FanPal • 2022