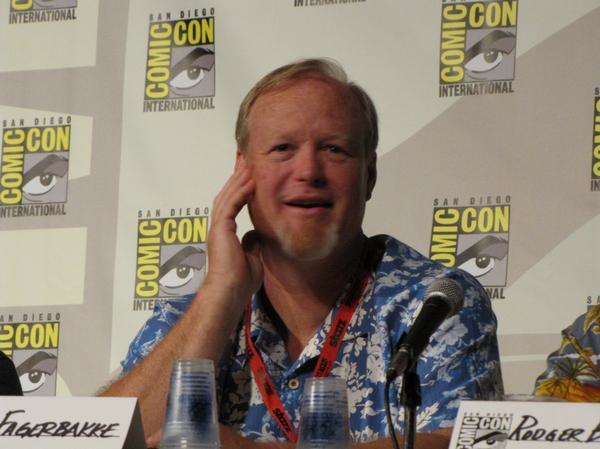 William Mark Fagerbakke (/ˈfeɪɡərbɑːki/; born October 4, 1957)[1] is an American actor and voice actor. He is best known for his long-running roles as Patrick Star in the animated series SpongeBob SquarePants and Michael "Dauber" Dybinski on the sitcom Coach. He also appeared in 12 episodes of the sitcom How I Met Your Mother as Marshall Eriksen's father Marvin.

Fagerbakke, was born in October 4, 1957,[2] in Fontana, California, and moved to Rupert, Idaho, as a youth. He graduated from Minico High School in Rupert in 1975, where he was a three-sport athlete for the Spartans in football, basketball, and track.[3]

Although he had multiple scholarship offers for college football, including Pac-8 schools, he decided to stay in state and attended the University of Idaho in Moscow.[3] He was a defensive lineman for the Vandals and was ticketed to redshirt in 1976, but was called into action in the fourth game of his sophomore season.[4] The Vandals went 7–4 in 1976, their first winning season in five years, and were 5–2 in the seven games that Fagerbakke started.[5] Head coach Ed Troxel planned on moving him to the offensive line in 1977,[6] but a knee injury in spring drills ended Fagerbakke's athletic career, which turned his focus to theater. (The Vandals went 3–8 in 1977 and Troxel was fired; then 2–9 in 1978 under Jerry Davitch, one of the wins being a "no-show" forfeit.)[5]

Fagerbakke's first theatrical role was in a campus production of Godspell.[3] He was a member of the Delta Tau Delta fraternity and earned his bachelor's degree in 1981, a result of "two years of football and four years of school."[7][8] He later attended graduate school at Southern Methodist University in Dallas, Texas.[3][9]

Fagerbakke has appeared on television in roles such as assistant coach "Dauber" Dybinski on Coach, in movies, including Funny Farm, and several on-and-off Broadway stage shows.[10][11] He had a role as the mentally disabled Tom Cullen in the 1994 mini-series Stephen King's The Stand. In 1999, he had a role in HBO's original series Oz as Officer Karl Metzger. He is the voice of Patrick Star on the Nicktoon, SpongeBob SquarePants. His character on Coach was based on a former assistant coach at Idaho, a graduate assistant nicknamed "Tuna."[12]

In 2007, he made a cameo appearance on the show Heroes as Steve Gustavson in the episodes "Run" and "Unexpected." Fagerbakke has received critical acclaim as a thespian by the Screen Actors Guild and Juilliard School of Performing Arts for his roles as Shylock in Shakespeare's The Merchant of Venice, and Torvald in Ibsen's A Doll's House.[11] In 2009, he had a role in the film Jennifer's Body. He also played the role of Marvin Eriksen Sr. in the CBS sitcom How I Met Your Mother. In 2012, he made a cameo appearance in the TV show Weeds.

Fagerbakke and Bumpass at the 2009 San Diego Comic-Con