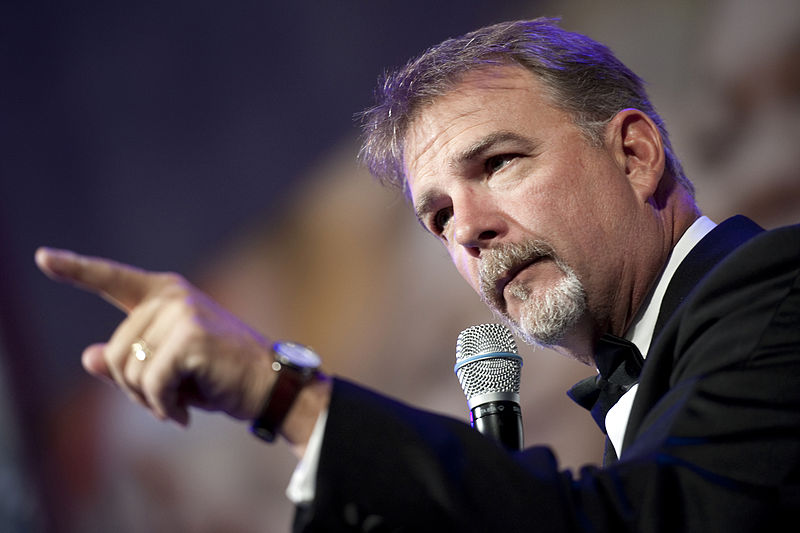 William Ray Engvall Jr. (born July 27, 1957)[1] is an American comedian and actor best known for his work as a stand-up comic, his signature "Here's Your Sign" bit, and as a member of the Blue Collar Comedy group.

Bill Engvall was born in Galveston, Texas. Following graduation from Richardson High School in Richardson, Texas, Engvall attended Southwestern University in Georgetown, Texas, intending to earn a bachelor's degree and become a teacher.[2] While at Southwestern he was a member of Xi Chapter of the Kappa Alpha Order. Engvall left college without graduating and worked a series of jobs, including tour guide at Inner Space Caverns, and disc jockey in a Dallas, Texas nightclub.[3] It was while working as club DJ he first ventured into standup comedy at amateur and open mic nights around Dallas.
Read more...

In 1990 Bill Engvall moved to southern California to dedicate full-time to his comedy. Early notoriety came from hosting the cable show A Pair of Jokers with Rosie O'Donnell and an appearance on The Golden Palace where he played Blanche's son Matthew, a stockbroker turned aspiring comic. Other early appearances included hosting A&E Networks An Evening at The Improv as well as stand-up routines on The Tonight Show and the Late Show with David Letterman.[4]

A career breakthrough happened in 1992 when Engvall was named Best Male Standup at the American Comedy Awards. He appeared as Matthew Devereaux, the son of Blanche Devereaux on an episode of The Golden Palace in 1993. His first role as a series regular came soon after when he was cast in the ABC series Delta, starring Delta Burke. However, the show only lasted one season and Engvall returned to making the rounds of comedy clubs and the occasional television appearance until 1996 when he was cast with fellow comic and best friend Jeff Foxworthy in the NBC version of The Jeff Foxworthy Show. Signed by Warner Bros. Records in 1996, Engvall released the first of a series of highly successful comedy albums, Here's Your Sign, based on his signature stage bit. The album was certified Platinum and peaked at #5 on the Billboard Country album chart, thanks in part to the single and video of the same title on which he collaborated with country singer Travis Tritt.[5] Eight more comedy albums followed including Dorkfish in 1998, and the most recent, 2009's Aged and Confused.

In 2011, he also attended the NASCAR After The Lap event in Las Vegas.

In 2000, Jeff Foxworthy and Engvall launched the first of 6 Blue Collar Comedy Tours.[6] The tours also featured Ron White and Larry the Cable Guy and were largely responsible for their breakout success. Each of the 6 years of the tour were very successful and spawned 3 films, a satellite radio show, and a television show titled Blue Collar TV on The WB Network.

On June 6, 2011, Engvall began a new chapter in his career as he took over as host of the re-launched Lingo on GSN.[7] According to an interview in American Profile magazine, Engvall said he jumped at the chance to host the show, citing the fun his friend Foxworthy had hosting Are You Smarter Than a 5th Grader?. Engvall had been a fan of Lingo when it aired a few years previously before ending in 2007, admitting that his wife always beat him to the answers. When asked if there were any plans to have buddies Foxworthy or Larry The Cable Guy appear on Lingo, he replied, "You never know! I would love to have them on the show because it would be a blast. I would really dig that."[8]

In 2013, Engvall was announced as a contestant on the 17th season of Dancing with the Stars paired with professional dancer Emma Slater.[9] In the first week, he danced the Foxtrot and received a score of 18. The second week was Latin week and he saw some higher scores from the judges receiving a 21 for his Jive. And the third week of competition, Bill saw his highest score of 24 with a Paso Doble to the Lone Ranger theme song. Throughout the rest of the show, the judges usually placed Engvall and Slater at the bottom of the leaderboard, but an enormous fan base kept them in the competition, resulting in higher-scoring contestants, e.g. Christina Milian, Snooki, Brant Daugherty, Elizabeth Berkley, and Leah Remini being voted out instead.

On November 18, Engvall and Slater made it to the finals, along with Amber Riley, Jack Osbourne and Corbin Bleu. The two finished in 4th place.

Bill and Gail Engvall (born August 5, 1960) have been married since December 18, 1982. They have a daughter named Emily (born 1986), a 2008 graduate from the University of Puget Sound, as well as a son, Travis (born June 25, 1991), a 2015 graduate from Northern Arizona University; both of whom are often mentioned during his routines. Engvall resides in southern California when not on tour and maintains a blog for the Los Angeles Angels of Anaheim on the website of Fox Sports West.[10][11]