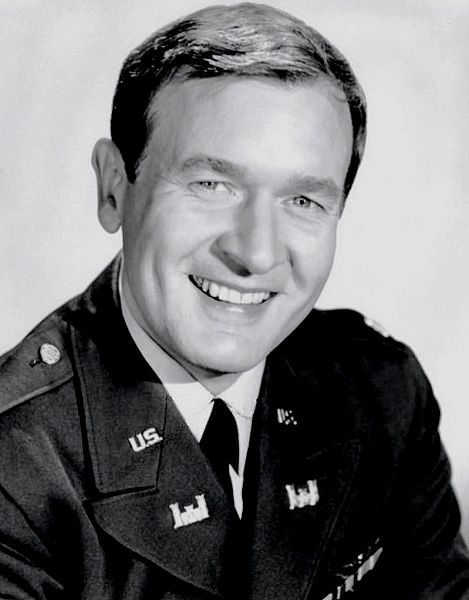 William Edward Daily (August 30, 1927 - September 4, 2018)[2][3] was an American actor and comedian known for his sitcom work as Roger Healey on I Dream of Jeannie and Howard Borden on The Bob Newhart Show.

William Edward Daily was born on August 30, 1927, in Des Moines, Iowa,[4] the son of Fern Ellis and Raymond Daily, who went out for a loaf of bread two weeks after his son was born but never returned.[5] In 1939, he moved with his family from Des Moines to Chicago, Illinois, where he spent the rest of his youth.[4] Following graduation from Lane Technical High School and studied for a time at the Goodman Theatre School,[6] Daily left home to become a professional musician and played upright bass with jazz bands in numerous clubs across the Midwest.[5] In the early 1950s, he was drafted into the United States Army, serving in the Korean War[4] with an artillery unit before being later transferred to an entertainment unit.[7]

Following his time in the Army, Daily began performing stand-up comedy and gradually began playing some of the bigger clubs in the country. After graduating from the Goodman Theatre School, Daily worked for the NBC television station in Chicago, WMAQ, as an announcer and floor manager. He eventually became a staff director.[1] Daily stated that preparing for a Chicago-area Emmy Award telecast, he asked a young Bob Newhart to come up with a routine about press agents that resulted in the routine "Abe Lincoln vs. Madison Avenue".[8] During his days off, Daily drove to Cleveland to write, direct and perform on The Mike Douglas Show.[2] In 1963, Steve Allen appeared on The Mike Douglas Show, saw Daily do a comedy bit and offered him a job in Los Angeles as an announcer, writer and performer on his syndicated show.[2]

Main articles: I Dream of Jeannie and The Bob Newhart Show Bill Daily at the 2011 Supanova Expo in Australia

Daily appeared in guest spots on My Mother the Car, The Farmer's Daughter and Bewitched. Veteran sitcom writer Sidney Sheldon liked Daily's work and hired him for a supporting role on I Dream of Jeannie.

In 1972, two years after Jeannie was canceled, Daily was back on television in another aviator's uniform, as Howard Borden in The Bob Newhart Show. Borden, a commercial airline navigator who later became a co-pilot, lived across the hall from Bob Newhart's Bob Hartley character, and would frequently pop into the Hartleys' apartment to borrow things, mooch a meal, or have the Hartleys take care of his son when he had custody of him.

For the two years that followed The Bob Newhart Show, Daily returned to stand-up, but in 1980, after years of making a living as a second banana, Daily was offered his own show. Called Small & Frye, the show featured Daily as a neurotic doctor; it lasted only three months before being canceled. Daily, a lifelong lover of magic, made three syndicated specials introducing young magicians called Bill Daily's Hocus-Pocus Gang which aired in 1982 and 1983.

Daily occasionally served as a panelist on the 1970s CBS game show Match Game. After Richard Dawson's departure, Daily was a semi-regular for the final three years of the show's CBS and syndicated run.[4]

In 1988, Daily tried his hand again at starring roles, this time as another doctor on the sitcom Starting From Scratch. The show fared slightly better than Frye, but was canceled after one season. Daily's most notable post-Newhart role was another supporting character, that of Larry the psychiatrist on the cult favorite ALF (1986). Jack Riley appeared as an unnamed patient, clearly reprising Elliot Carlin from The Bob Newhart Show. ALF claimed to have learned all he knew about psychology from watching the earlier series.

During the 1980s and early 1990s, Daily reprised his I Dream of Jeannie role of Roger Healey in two made-for-TV reunion movies: I Dream of Jeannie... Fifteen Years Later (1985) and I Still Dream of Jeannie (1991). In 1990, he reunited with Bob Newhart as a new, overbearing neighbor in the Newhart episode "Good Neighbor Sam". Also in 1991, he reprised the role of Howard Borden in The Bob Newhart Show: The 19th Anniversary Special, which aired in November of that year. In 1997, he was a guest star on Caroline in the City.[7]

Although mostly retired, Daily still did some live comedy and occasional television guest appearances into the 2000s. From 2006 to February 2009, he was a guest host on radio station KBQI in Albuquerque.[4]

In 1987, Daily was named director of the New Mexico Film Commission.[9]

Daily married his first wife, Patricia Anderson, in 1949. In 1976, the couple divorced. Daily had two adopted children, a son, Patrick, and a daughter, Kimberley who is deceased.[10][11] In 1980 he married Vivian Sanchez, with whom he traveled on the road, performing Lover's Leap for two years, and with whom he had one child, Becca. He and Sanchez later divorced.[4][11]

In 1993, Daily married his third wife, Becky. The couple remained together until her death in 2010.[12] His manager and publicist was Patterson Lundquist.[4]

Daily died on September 4, 2018, in Santa Fe, New Mexico. His death was announced by his family three days later.[3] At Daily's request no funeral was planned.[12]

Report a problem
Biography of Bill Daily at FanPal • 2020