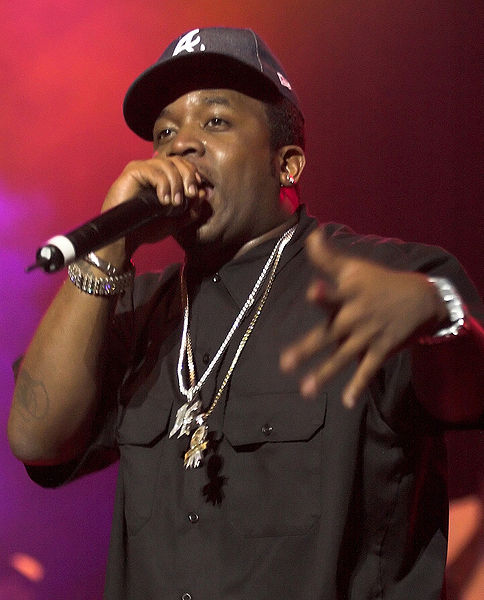 Antwan André Patton (born February 1, 1975), better known by his stage name Big Boi, is an American rapper, songwriter, actor and record producer, best known for being a member of American hip hop duo Outkast alongside André 3000. His work in the duo has produced six studio albums. Big Boi's solo debut Sir Lucious Left Foot: The Son of Chico Dusty was released in July 2010 to respectable sales and critical acclaim. He released his second studio album, Vicious Lies and Dangerous Rumors in 2012. Boomiverse, his third studio album, was released in June 2017.

Patton was born and spent the first half of his childhood in Savannah, Georgia, attending Herschel V. Jenkins High School,[1] before moving to Atlanta with his Aunt Renne. Eventually he decided to pursue his interest in music at Tri-Cities High School, a visual and performing arts Magnet school.
Read more...

He had a strong interest in hip hop music, and met André "3000" Benjamin while attending Tri Cities High School in the early-1990s. The two eventually joined forces as Outkast and signed with LaFace Records.[2]

Patton has often used his lyrics to criticize the problems that plague both the African American community and the world[citation needed]. An example is 2003's "War", a scathing attack on the Bush administration and the War on Terror. Another example is 2008's "Sumthin's Gotta Give" with Mary J. Blige talking about the state of America and Barack Obama.

After four increasingly successful albums as a duo, the members of Outkast chose to make two solo albums, and release them as a double album under the Outkast name. André 3000 released The Love Below and Big Boi released Speakerboxxx. The two albums were packaged together as Speakerboxxx/The Love Below in 2003. Speakerboxxx featured a style similar to Outkast's previous efforts, while The Love Below explored more offbeat territory, with André 3000 mainly singing rather than his usual rapping. One song from each album was released in September 2003 as a single.

Patton's choice was the single "The Way You Move", featuring Sleepy Brown. It was originally supported by urban radio, but then crossed over to pop charts and became almost as big a pop hit as Benjamin's "Hey Ya!". "The Way You Move" supplanted "Hey Ya!" as the #1 song on the US pop charts. The second single from Big Boi's side of the album was "Ghetto Musick", which featured both members of Outkast and a sample from Patti LaBelle's "Love, Need and Want You".

In 2005, Big Boi released a mixtape/compilation album, Got Purp? Vol 2, in conjunction with the Purple Ribbon All-Stars on November 22 through Purple Ribbon Records; Aquemeni Records had become defunct after Benjamin left the company. The first single from the album was "Kryptonite", which reached 35 on the Billboard Hot 100. Patton was also featured on the song "International Players Anthem (I Choose You)", the first single from UGK's album Underground Kingz.

In 2007, after the sixth album under the Outkast name, Idlewild, Big Boi announced plans to release a full-fledged solo album. While he had released a previous solo album in Speakerboxxx, it still was technically under the Outkast name. The album was to be titled Sir Lucious Left Foot: The Son of Chico Dusty. The album's first promotional single, "Royal Flush", was released in 2007, and featured Raekwon and André 3000. Over the next few years the album saw many delays, but multiple promotional and video singles were released such as "Shine Blockas" featuring Gucci Mane, "For Yo Sorrows" featuring George Clinton and Too Short and "General Patton" featuring Big Rube. The first official single was "Shutterbugg" featuring Cutty and the second "Follow Us" featuring Vonnegutt. The album was released internationally on July 5. Guest artists include alternative urban songstress Janelle Monáe; Big Boi's own new group Vonnegutt; plus established rappers T.I. and B.o.B.[3] Sir Lucious Left Foot: The Son of Chico Dusty received general acclaim from most music critics, earning praise for its inventive sound, varied musical style, and Big Boi's lyricism.[4][5]

On February 27, 2011, it was announced that Big Boi was creating a joint album along with rappers Mike Bigga and Pill.[6] Later, on April 28, 2011, Big Boi announced that he would be working with Modest Mouse on their upcoming album Strangers to Ourselves.[7] These collaborations have yet to surface.

In a July 2010 interview for The Village Voice, Big Boi revealed that he is working on the follow-up album to Sir Lucious Left Foot, entitled Vicious Lies and Dangerous Rumors, stating that he is "maybe about six songs into it".[8][9] It was released on November 13, 2012.[10] The first single from the album was "Mama Told Me" featuring Kelly Rowland.[11] The album featured guest appearances from ASAP Rocky, Ludacris, T.I., Little Dragon, Phantogram, Kelly Rowland and B.o.B.[12]

Later in 2012, Big Boi revealed that he was already ten songs deep into his third studio album. He reiterated his plans for a new studio album in January 2014.[13][14] He was featured on the Catch The Throne mixtape with the song "Mother of Dragons", it was released for free download on SoundCloud by HBO on March 7, 2014 to promote the fourth season of Game of Thrones.[15]

On April 19, 2017, Big Boi revealed that his third studio album would be titled Boomiverse, and that two singles, "Mic Jack" featuring Adam Levine and "Kill Jill" featuring Killer Mike and Jeezy, would be released the following day.[18]

Big Boi appeared on Nick Cannon's Wild 'n Out Season 3 & Season 5 as one of the many guest stars, as well as guest starring and appearing as a musical guest on Chappelle's Show performing his song "The Rooster". In 2006, he branched into feature film acting, appearing in ATL and Idlewild, followed by a starring role in 2007's Who's Your Caddy?

Big Boi is a playable character in the Def Jam: Icon videogame.

In 2008, Big Boi began a collaboration on a new show with the Atlanta Ballet. The show, entitled big, premiered at the Fox Theater in Atlanta, April 10-13, 2008.[22] The show was performed by Atlanta Ballet dancers, local youth and talent, as choreographed by Lauri Stallings. Music may be performed live onstage during the performance,[23] as it was when the ballet created a live music/dance collaboration with the Indigo Girls.[24]

In 2011, Big Boi was featured by Owl City in one of the four versions of his song, "Alligator Sky".[25] Though the track version featuring Big Boi never made it past the stage of a demo, it was leaked to the internet the same year of the official version of the track.

His wife Sherlita Patton was also the co-owner of a clothing boutique in Atlanta, Georgia called PValentine. She co-owned the store with Tracy Valentine. The expensive brands carried by the store and the ties to Big Boi attracted many music artists and other celebrities to the store. The store was featured on an episode of MTV's My Super Sweet 16 when R&B artist Chris Brown went for a birthday gift from Big Boi. The boutique closed in 2008. Big Boi is also a registered pit bull breeder.

In August 2011, Patton was returning from a cruise when a U.S. Immigration and Customs Enforcement drug dog at the Port of Miami alerted officers. Patton was arrested and charged with illegal possession of the controlled substance MDMA powder and Viagra.[26] Patton was released from the Miami-Dade County jail on a $16,000 bond.[27][28]

In an interview with New York City's Hot 97, Big Boi stated that the day after the 2012 U.S. presidential election, a white woman approached him at an airport and congratulated him on "his win last night" (referring to Barack Obama winning re-election), to which Big Boi responded, "Bitch, I voted for Gary Johnson."[29][30][31] He has since confirmed his libertarian political ideologies.

In 2010, Big Boi launched his custom Chuck Taylor sneakers with Converse.[33] The shoes feature the title of his Def Jam solo album debut: "Sir Lucious Left Foot" on the left, and "Son of Chico Dusty" on the right. His Big Boi logo is featured on the tongue of the shoe.

In 2015, Big Boi announced on the Rap Radar Podcast that he supported Bernie Sanders for president.[34]