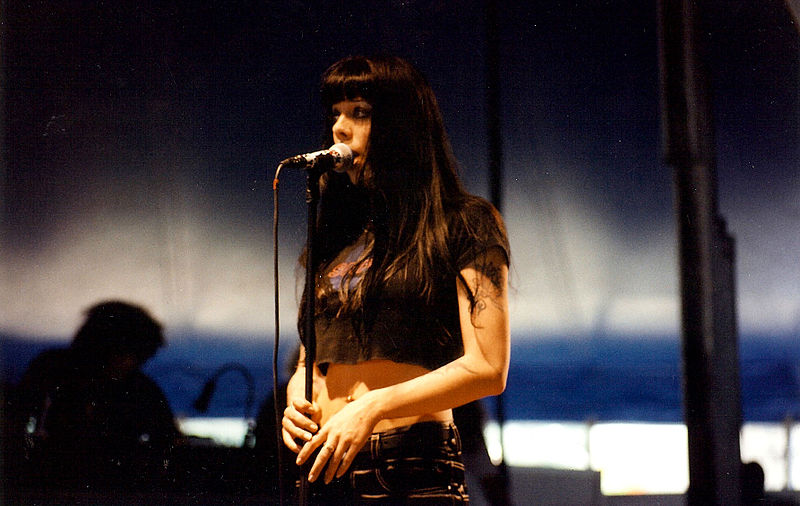 Bif Naked was born in New Delhi to teenage parents attending private school.[1] She was subsequently adopted by American missionaries.[2] She spent part of her childhood in Lexington, Kentucky, where her father was a professor at the University of Kentucky. She went to Kelsey Elementary School in The Pas, Manitoba for a couple of years. After living for a time in Dauphin, Manitoba, her family eventually settled in Winnipeg.[3][4] She graduated from John Taylor Collegiate and studied theatre at the University of Winnipeg.

The name "Bif" started as a nickname based on the mispronunciation of her real name, Beth.[5]

Bif Naked released a self-titled solo album, Bif Naked, in 1996, and I Bificus in 1998. In 1999 she toured across Canada.[6] Another solo album, Purge was released in 2001. A noted poet, she has also released a spoken word album called Okenspay Ordway: Things I Forgot To Tell Mommy. In 2005, after narrowing it down from over fifty songs, she released Superbeautifulmonster, which featured thirteen tracks. The Promise, which was recorded while Bif was undergoing chemotherapy for breast cancer, was released in 2009 and was dedicated to her fans. The album featured tracks mixed by Juno Award winner Mike Fraser. In 2011, after doing acoustic sets on tour, Bif released an acoustic record on Her Royal Majesty's Records late-2013, featuring acoustic versions of her past songs as well as four previously unreleased tracks. The album is entitled BIF NAKED FOREVER: Acoustic Hits and Other Delights.[7][8] Bif has also been involved on a side project, Jakkarta.[9]

Prior to her solo career, Torbert played with punk bands Gorilla Gorilla and Chrome Dog. She has toured Europe, the United States, and Canada as a headlining act, and has performed on bills with: Snoop Dogg, Billy Idol, Dido, Devin Townsend, Sarah McLachlan, Sheryl Crow, Chrissie Hynde, Foo Fighters, The Cult Prodigy, Smashing Pumpkins, Ministry, Green Day, and many more.

Bif's music has been featured in and on soundtracks for shows including Buffy the Vampire Slayer, Charmed, Moonlight, The Crow: Stairway to Heaven, Ready To Rumble, The West Wing and Celebrity Deathmatch. She recorded a rendition of the Christmas classic, "I Saw Mommy Kissing Santa Claus" for MTV's Total Request Live CD MTV: TRL Christmas in 1999 and was also featured on the Ready to Rumble soundtrack with a cover of Twisted Sister's "We're Not Gonna Take It." The song "Dawn", taken from Purge, was featured in the film American Psycho 2, starring Mila Kunis and William Shatner.

She made a guest appearance in the song "Fucker", on Strapping Young Lad's album The New Black in 2006. Bif Naked has also made guest appearances with artists such as SNFU on the songs "One Last Loveshove" and "You Make Me Thick". She also appeared on the Dead Celebrity Status album Blood Music on the track titled "In This Day And Age". In 2011, she recorded a duet with Vancouver-based yogi and Nettwerk recording artist Will Blunderfield for the international version of his album Hallelujah.

Bif Naked has also appeared in music videos for other artists including: The Offspring's "The Kids Aren't Alright", "Believe Me" and "Silver" by Moist and Liveonrelease's "Get with It." In 2009, she appeared in the video for Simple Plan's "Save You" near the end along with other people (such as Sharon Osbourne and René Angélil) who have survived or have been treated for cancer.

Aside from her music career, Bif has also pursued acting. In 1990, she appeared in the film Archangel, where she was credited as "Bif Torbert," playing a Russian soldier. In 1997, she played a liquor store manager in The Boys Club. She appeared in the television series Once a Thief in 1998, playing Nastassja Momomame. In 2000, she voiced the character Alison in the Daria movie, Is It Fall Yet?, playing a bisexual art camp attendee who attempts to seduce Jane Lane. She appeared in the Canadian indie films Lunch with Charles (2005) and Crossing (2005), the latter of which she recorded the song "My Greatest Masterpiece" for. She has done hosting work for the CBC Television series ZeD (becoming their first host in 2002), and for Bodog, hosting Bodog Fight in 2006 as well as a reality series chronicling the days leading up to her marriage with Vancouver Sun sports writer, Ian Walker, in 2007 called Bif Naked Bride.[10][11] She voiced the character Zoe Payne in the SSX video game series and Sled Storm. In 2003, she made a cameo appearance in the zombie horror film The House of the Dead. That same year, she appeared as a judge of a fictitious reality show in the TV series Cold Squad. In 2006, she guest starred on an episode of The L Word, playing a character named Cynthia. In addition, Bif Naked has appeared as herself in Buffy the Vampire Slayer, The Crow: Stairway to Heaven and The Chris Isaak Show. Bif Naked also narrated the TV series That's Art?! (2012).[12]

She is heavily tattooed, getting her first tattoo (an Egyptian Eye of Horus) when she was sixteen years old. Her tattoos include: a symbol of the Tao, Japanese writing, Buddhist poetry and images (such as the Bodhisattva), and Hindu imagery; she has stated on MTV that her favorite tattoo, on her left arm, reads "Survivor." Bif identifies as straight-edge.[13][14] She is also a comic cartoonist.

She has always been frank about her bisexuality,[3] and the lyrics of her autobiographical songs (such as 1995's "Everything") detail her attractions to and relationships with women. She is also a vegan for health (as opposed to ethical or religious) reasons.

She was diagnosed with a heart aneurysm, and had corrective heart surgery in 2012. Her song "Everyday," from her album Superbeautifulmonster, is in part a response to that experience.

Her first marriage, which lasted six months, was to her drummer. She then married former Vancouver Sun sports writer Ian Walker in 2007; they divorced in 2011.[15]

In January 2008, she announced that she had been diagnosed with breast cancer, and underwent a lumpectomy and chemotherapy.[16]

Bif Naked spoke at the University of the Fraser Valley for International Women's Day on March 8, 2013, at the Abbotsford campus in British Columbia, Canada; it was announced she would be awarded an honorary doctorate from the university in June 2013.[17]

On June 26, 2009, Bif Naked and Nazanin Afshin-Jam participated in the worldwide solidarity with the people of Iran. They performed the song Someday written and produced by Peter Karroll.[19]