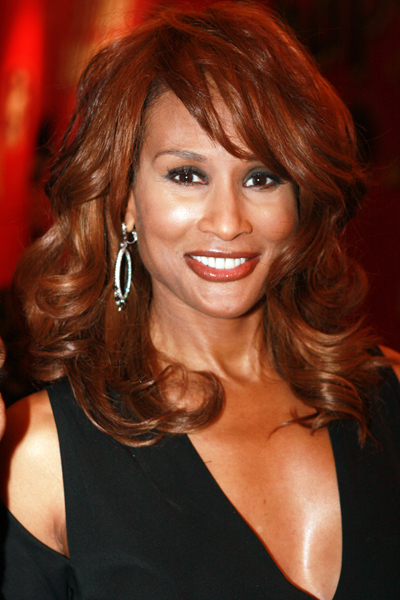 Beverly Ann Johnson[1][3] (born October 13, 1952)[4] is an American supermodel, actress, singer, and businesswoman. Johnson rose to fame when she became the first African-American model to appear on the cover of American Vogue in August 1974.[5][6] In 1975, Johnson became the first black woman to appear on the cover of the French edition of Elle.[7] In 2012, Johnson was the star of the reality series Beverly's Full House which aired on the Oprah Winfrey Network (OWN).[citation needed] The New York Times named Johnson one of the 20th century's most influential people in fashion in 2008.[8]

Born the first of two children to Gloria Johnson[9], a surgical technician, Johnson was raised in a middle-class family in Buffalo, New York. During her youth, Johnson was a champion swimmer and aspired to be a lawyer.[4] Johnson attended Bennett High School[10], graduating in 1969.[1] After high school, Johnson went on to study criminal justice at Northeastern University. While in college, Johnson tried modeling[11] while on summer break in 1971.[4] She quickly landed an assignment with Glamour and began working steadily.[11] She went on to appear on more than 500 magazine covers, including the August 1974 issue of Vogue, becoming the magazine's first African-American cover model.[4] Her appearance on the cover changed the beauty ideal in US fashion, and by 1975, every major American fashion designer had begun using African-American models.[12]

In addition to modeling, Johnson has also written a book, Beverly Johnson's Guide to a Life of Health and Beauty,[13] and embarked on an acting career.[14] She has also had roles in the films Ashanti (1979), The Meteor Man (1993), Def Jam's How to Be a Player (1997), and Crossroads (2002). She has appeared in guest spots on 7 television series, including Martin (TV series), Law & Order, Lois & Clark: The New Adventures of Superman, The Parent 'Hood and the Super Bowl episode of 3rd Rock from the Sun (1998). She served for two seasons as a celebrity judge on the TV Land series She's Got the Look, a reality series, where women over 35 compete for a modeling contract and magazine spread. At the start of the series in 2008, Johnson shared that she and other models had suffered from anorexia and bulimia during her career.[15] She had a brief singing career, releasing 1 album in 1979 on Buddah Records. Johnson has been a longtime hair and beauty influencer.[16]

Memoir and accusation against Bill Cosby

In late 2014, she wrote an article for Vanity Fair[17] in which she accused Bill Cosby of drugging her in a meeting at his Manhattan residence in the 1980s, although the incident did not result in a sexual assault. Johnson said that Cosby spiked a cup of cappuccino with an unknown drug. As she felt her "body go completely limp," she realized what was happening. Johnson said she then screamed and cursed at him several times before Cosby got angry and dragged her outside and hailed a cab for her. Johnson decided to tell her story in hopes that "by going public" she would "encourage anyone has been sexually victimized to speak out."[18][19] Her memoir, The Face That Changed It All, which discusses the Cosby incident, was released on August 25, 2015.

Subsequently, Cosby started a defamation law suit against Johnson, alleging that she was lying about the drugging incident and contending that Johnson's story, first told in the Vanity Fair article, had been repeated in numerous interviews. It seeks unspecified damages and an injunction preventing the model from repeating her claims and requests they be removed from Johnson's memoir.[20] A friend of Johnson said, “She expected this to happen. She didn’t seem upset 'with the news', but I think she’s prepared to counter-sue.”[21] Cosby dropped the lawsuit on February 19, 2016 to devote more time to his criminal case.[22]