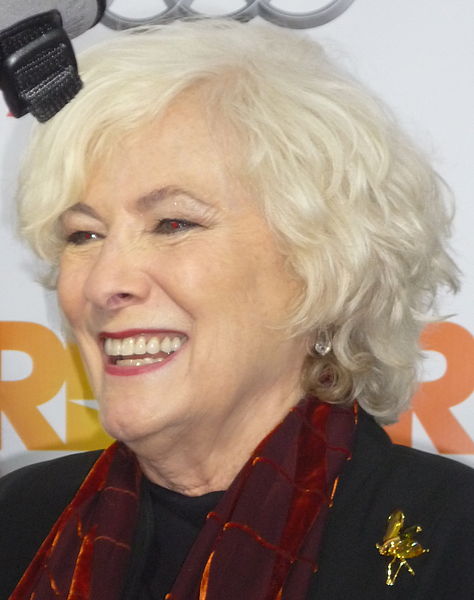 Betty Lynn Buckley (born July 3, 1947) is an American actress and singer. She won the 1983 Tony Award for Best Featured Actress in a Musical for her role as Grizabella in the original Broadway production of Cats. She went on to play Norma Desmond in Sunset Boulevard (1994-96) in both London and New York, receiving a 1995 Olivier Award nomination for Best Actress in a Musical, and was nominated for the 1997 Tony Award for Best Actress in a Musical for Triumph of Love. Her other Broadway credits include 1776 (1969), Pippin (1973), and The Mystery of Edwin Drood (1985). She is also a two-time Daytime Emmy Award nominee, a two-time Grammy Award nominee, and a 2012 American Theater Hall of Fame inductee.[1]

Buckley starred in the ABC series Eight is Enough from 1977 to 1981, and played gym teacher Ms. Collins in the 1976 film Carrie, before going on to star in the short-lived Broadway musical version of Carrie in 1988, playing Carrie White’s mother, Margaret. Her other film roles include Dixie Scott in Tender Mercies (1983), Sondra Walker in Frantic (1988), Kathy in Another Woman (1988) and Mrs. Jones in The Happening (2008). She received a Saturn Award nomination for her role as Dr. Karen Fletcher in the 2016 film Split. Her other television credits include the HBO series Oz (2001-03), and the AMC series Preacher (2018). She is set to star in the title role in the upcoming US national tour of Hello, Dolly.

Betty Lynn Buckley was born in Big Spring, Texas, and raised in Fort Worth, the daughter of Betty Bob (née Diltz), a dancer and journalist, and Ernest Lynn Buckley, a retired lieutenant colonel in the U.S. Air Force and former dean of engineering at South Dakota State University. She is the oldest of their four children. She has three brothers—Norman Buckley is a film editor and TV director, and Patrick and Michael Buckley are engineers. While a student at Texas Christian University (TCU), she was a member of Zeta Tau Alpha. She was crowned "Miss Fort Worth" in 1966 and was runner-up in the Miss Texas competition. Buckley was then invited to perform at the Miss America pageant in Atlantic City, where she was spotted by a talent scout. After returning to TCU to earn her college degree, she toured Asia to visit soldiers wounded in the Vietnam War. Then she worked for a time as a reporter for the Fort Worth Press, but went to New York City in 1969, where she landed the role of Martha Jefferson in 1776 her first day in town.
Read more...

Buckley as Abby Abbott in Eight is Enough, 1977

Buckley made her Broadway debut in 1969 in the original production of the musical 1776;[2] she has been called "The Voice of Broadway" by New York magazine. She is perhaps best known for the 1977-81 TV dramedy Eight Is Enough. She joined the show in its second season when the original star, Diana Hyland, died after the first four episodes of season one. Hyland's character (Joan Bradford) died, and Buckley was cast as the widower's new romantic interest, Sandra Sue Abbott (nicknamed Abby), who became stepmother of the eight children to which the series' title refers.

Buckley appeared in the original movie version of Carrie in 1976, playing Miss Collins, Carrie's gym teacher. She went on to appear as Margaret White in the 1987 musical adaptation of the film on Broadway. In 1977, she recorded an uncredited solo on the song "Walking in Space", in the movie Hair.

In 1982, Buckley starred as Grizabella in the original Broadway production of the musical Cats, which features the song "Memory". She stayed with the production for 18 months. For this role, she won a Tony Award for Best Featured Actress in a Musical.

Her screen roles during the 1980s include Bruce Beresford's film Tender Mercies, where she played a country singer and sang the Academy Award-nominated song "Over You". She also appeared in the Woody Allen film Another Woman (1988), Roman Polanski's Frantic (1988), Lawrence's Kasden's Wyatt Earp (1994), and M. Night Shyamalan's The Happening (2008). On television, she received two Daytime Emmy Award nominations for Outstanding Performer in a Children's Program/Special, for NBC Special Treat - Bobby and Sarah (1984) and ABC Afterschool Special - Taking a Stand (1989).

In 2001-03, she played a role in seasons 4-6 of the HBO series Oz. She also has guest-starred in a number of television series, including Without a Trace, Law & Order: Special Victims Unit, and Monk. She guest-starred in a Christmas special of the TV series Remember WENN, in which she sang "You Make It Christmas".

Buckley sang "Memory" from Cats at the Kennedy Center Honors in December 2006 as part of the tribute to Andrew Lloyd Webber.[5] In 2007, Buckley appeared with Quintessence at Lincoln Center in its Great American Songbook series.

In 2008, Buckley played Mrs. Jones in M. Night Shyamalan's The Happening opposite Mark Wahlberg and Zooey Deschanel. She appeared as Marion Leckie, mother of Robert Leckie in the HBO series The Pacific, produced by Steven Spielberg and Tom Hanks, which aired in 2010. Also in 2010, she appeared in the 18th episode of Melrose Place, as a food critic cast by her brother Norman Buckley, who directed the episode. She also guest-starred in an episode of the new Fox series The Chicago Code. She was a recurring guest star on Pretty Little Liars as Regina Marin, also directed by her brother Norman.

Buckley participated in a reading of the musical Ruthless! in September, 2010, playing the role of Sylvia St. Croix/Ruth DelMarco. She then played Mrs. White in the off-Broadway comedy White's Lies from March-May 2010. In 2011, Buckley starred in the Dallas Theater Center production of Arsenic and Old Lace by Joseph Kesselring with Tovah Feldshuh. On January 28, 2013, she was inducted into The American Theater Hall of Fame. From January-March 2013, she starred in the London Premiere of Jerry Herman's Dear World, receiving rave reviews.[6] The musical was directed and choreographed by Gillian Lynne, with whom Buckley had previously worked on Cats. In September 2013, she starred in the world premiere of Horton Foote's The Old Friends at the Signature Theatre off-Broadway. She repeated her performance in 2014 at Houston's famed Alley Theatre.

In 2017, Buckley was one of the stars of Split, the number-one film at the box office for three weeks. [8] Her other television credits include guest-starring as Meg's mother in The Leftovers on November 30, 2015, appearing in three episodes of the 2017 series Supergirl, and starring in season three of the AMC series Preacher in 2018.

On February 12, 2018, it was announced that Buckley would portray the title role in the first national tour of the 2017 Broadway revival of Hello, Dolly!, beginning performances in October 2018 in the Connor Palace at Cleveland's Playhouse Square.[9]

Buckley singing the National Anthem at MetLife Stadium, in 2012

Buckley's 18th solo album, Hope, was released on June 8, 2018, and she continues to appear in concert across the U.S. each year. She is also a composer; her first recording contains mostly songs she wrote. She is also featured on many Broadway compilation recordings, and on the original cast recording of 1776, the Original Broadway recording of Cats, the London recording of Promises, Promises, Triumph of Love and The Mystery of Edwin Drood.

In 2002, Buckley was nominated for a Grammy Award in the Best Traditional Pop Vocal Album Category, for her album Stars and the Moon: Live at the Donmar, which was recorded at the Donmar Warehouse Theatre in London. This was her second Grammy nomination, she had previously been nominated in 2000, in the Best Spoken Word Album category for The Diaries of Adam and Eve.

Her albums Quintessence and 1967 were released by Playbill Records in February 2008. Quintessence features jazz arrangements of standards by her longtime collaborator, jazz pianist Kenny Werner; while 1967 is a recording produced by T-Bone Burnett, and made when Buckley was just 19.

Her album Bootleg: Boardmixes From the Road was released in 2010, and her recording of her hit show at Feinstein's at the Regency with pianist Christian Jacob, entitled Ah, Men: The Boys of Broadway debuted on 28 August 2012.

Her album Ghostlight was produced by the legendary T Bone Burnett and was released on September 16, 2014.[10]

She lives on a ranch in Texas with two horses, a donkey, several rescued cats, and three dogs, and, as an accomplished horsewoman, participates in NCHA cutting horse competitions while continuing to appear in films, television and theater and to sing concerts in a wide variety of venues.

Buckley has also taught song interpretation and scene study for over 40 years. She conducts master classes in Fort Worth, New York City, Los Angeles, Denver and other cities around the country.

Buckley's official website contains her concert and theater schedule, a detailed biography and timeline,and summaries of her singing and acting accomplishments.