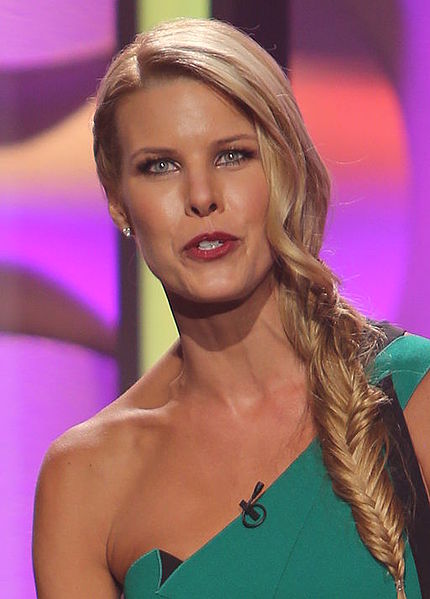 Ostrosky was born in Pittsburgh, Pennsylvania. Her mother, Judy (née Jarema), is a former model and devout Catholic, and her father, Robert Ostrosky, is a dentist.[3] Ostrosky was raised Roman Catholic.[4] She has two brothers.[5]

She attended Fox Chapel High School in suburban Fox Chapel, Pennsylvania, and went on to study English Literature at the University of Pittsburgh where she was a member of the Delta Delta Delta sorority.

Howard Stern and Ostrosky in 2011

Ostrosky worked as a model while in high school. She moved from Pittsburgh to New York City to pursue her modeling career and worked for several of the fashion houses in NYC in the early 2000s. Soon after her arrival in New York City, talent scouts began to take notice of her, and offered her small parts in movies and television ad campaigns.[citation needed]

Ostrosky received her first noticeable role as one of the daughters of Ben Stiller's supposed birth parents in the 1996 film, Flirting with Disaster. She played a more prominent role four years later, in the film Whipped, with Amanda Peet. Ostrosky has also appeared on television, appearing in the final season of G4 show Filter, and the Spike TV series Casino Cinema.

She has appeared in her own line of calendars, as well as on the covers of several magazines. She has been on the cover of FHM three times.[6] Votes from the readers of For Him Magazine ("FHM") placed Stern among FHM's 100 Sexiest Women of the Year in 2002, 2003, 2004, and 2007( #76). AskMen.com placed Stern 96th in its list of the Most Desirable Women for 2007.[volume & issue needed][7] She is signed to Click Models, in Boston and New York City.[citation needed]

In 2010, Ostrosky-Stern authored Oh My Dog: How to Choose, Train, Groom, Nurture, Feed, and Care for Your New Best Friend,[8] which reached #5 on The New York Times Best Seller list of paperback advice books.[9] In 2014, Ostrosky-Stern wrote the children's book Yoda: The Story of a Cat and his Kittens about a Persian cat with a heart condition, that she and her husband rescued. Proceeds from the book went to support Bianca’s Furry Friends, a 15,000-square-foot, cage-free animal shelter at the North Shore Animal League, named after the couple's deceased bulldog.[10] In 2015, Ostrosky-Stern wrote a sequel Yoda Gets a Buddy.[11]

Ostrosky and Howard Stern became engaged on February 13, 2007 after 7 years of dating, and were married at Le Cirque restaurant in New York City on October 3, 2008.[12] Ostrosky has legally changed her last name to Stern.[citation needed] As of June 2014[update], Ostrosky and Stern have fostered and found homes for 75 cats from their New York City residence.[13]