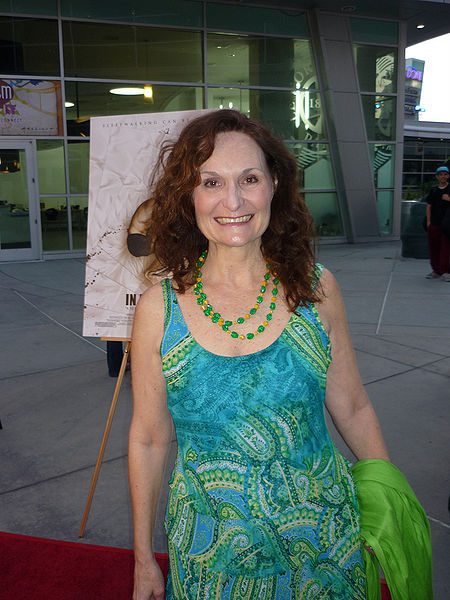 Beth Grant (born September 18, 1949)[1] is an American character actress known for often playing conservatives, religious zealots, or sticklers for rules. Between 2012 and 2017, she was a series regular on the television comedy The Mindy Project portraying the role of Beverly Janoszewski. She is also known for her recurring role Gracie Leigh in the CBS post-apocalyptic drama Jericho, and for playing Marianne Marie Beetle, a recurring character in the Bryan Fuller series Wonderfalls, Pushing Daisies, and Mockingbird Lane.

Grant was born on September 18, 1949 in Gadsden, Alabama.[1] She grew up in Kenansville, North Carolina. Her father was a poultry specialist and salesman.[2] Her mother worked as a manager for the North Carolina Employment Security Commission and was an activist for the Equal Rights Amendment. Grant credits her mother for providing the inspiration to become an actress.[2] She graduated from East Carolina University, Greenville, North Carolina with a Bachelor of Fine Arts in Acting and Directing in 1973 and then travelled to New York to pursue a career in acting.[2][3]
Read more...

She has appeared in dozens of films, including three Oscar Best Picture winners: Rain Man; Speed; To Wong Foo, Thanks for Everything! Julie Newmar; Love Field; Donnie Darko; A Time to Kill; Little Miss Sunshine; Child's Play 2; Daltry Calhoun; City Slickers II: The Legend of Curly's Gold; Don't Tell Her It's Me; Matchstick Men; Factory Girl; The Wizard; Sordid Lives; The Rookie; All About Steve; No Country for Old Men, Extract, Crazy Heart, Rango, Hollywood to Dollywood (as herself), and Dance with Me[4][better source needed].

Grant has also appeared in many TV shows, including Everwood; Delta; The Golden Girls; Malcolm in the Middle; The X-Files; Friends; CSI; Six Feet Under; Wonderfalls; Pushing Daisies; My Name Is Earl; Yes, Dear; King of the Hill; The Office; Angel; Judging Amy; Jericho; Sordid Lives: The Series; Criminal Minds, Sabrina The Teenage Witch; True Blood; How I Met Your Mother; Modern Family; The Mentalist; and The Mindy Project.

Grant played the same character, Marianne Marie Beetle, in the short-lived show Wonderfalls and Pushing Daisies, both created by Bryan Fuller, and portrays the similarly named "Marie" in Mockingbird Lane, Fuller's re-imagining of The Munsters.

Inspired by Mindy Kaling, Grant is also in the process of writing a Broadway musical, set in 1969 Greenwich Village.[7]

She is married to actor Michael Chieffo and has one daughter, actress Mary Chieffo. Grant lives with her family in the neighborhood of Valley Village, Los Angeles in California.[2]

Grant at the premiere of In My Sleep in 2010