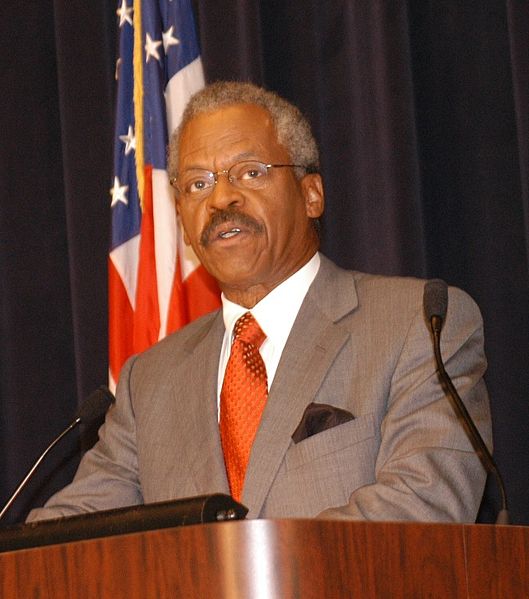 Bernard Shaw (born May 22, 1940) is a retired American journalist and former lead news anchor for CNN from 1980 until his retirement in March 2001.

Shaw was born in Chicago, Illinois and attended the University of Illinois at Chicago from 1963 to 1968. He served in the U.S. Marine Corps, including stints in Hawaii and at Marine Corps Air Station, Cherry Point, North Carolina, where in 1962 he was a "Message Center" specialist, achieving the rank of Corporal, E-4. He exhibited a passionate interest in the print media, clipping articles from newspapers, and often traveled on weekends to Washington, D.C. He cultivated an acquaintance with Walter Cronkite and had an interest in baseball.[1][2]
Read more...

Shaw began his broadcasting career as an anchor and reporter for WNUS in Chicago. He then worked as a reporter for the Westinghouse Broadcasting Company in Chicago, moving later to Washington as the White House correspondent. He worked as a correspondent in the Washington Bureau of CBS News from 1971 to 1977. In 1977, he moved to ABC News as Latin American correspondent and bureau chief before becoming the Capitol Hill Senior Correspondent. He left ABC in 1980 to move to CNN as co-anchor of its PrimeNews broadcast, anchoring from Washington, D.C..

Shaw is widely known for the question he posed to Democratic U.S. presidential candidate Michael Dukakis at his second Presidential debate with George H. W. Bush during the 1988 election, which Shaw was moderating. Knowing that Dukakis opposed the death penalty, Shaw asked him if he would support an irrevocable death penalty for a man who hypothetically raped and murdered Dukakis's wife. Dukakis responded that he would not; critics felt he framed his response too legalistically and logically, and did not address it sufficiently on a personal level. Kitty Dukakis, among other public figures, found the question inflammatory and unwarranted at a presidential debate. Several journalists also on the panel with Shaw, including Ann Compton, Andrea Mitchell, and Margaret Garrard Warner, expressed an interest in leaving Dukakis's name out of the question.[3]

He is also remembered for his reporting on the 1991 Gulf War.[4] Reporting with CNN correspondents John Holliman and Peter Arnett from the Al-Rashid Hotel in Baghdad, he found shelter under a desk as he reported cruise missiles flying past his window. He also made frequent trips back and forth from the hotel's bomb shelter. While describing the situation in Baghdad, he famously stated "Clearly I've never been there, but this feels like we're in the center of hell."

He moderated the October 2000 vice-presidential debate between Dick Cheney and Joe Lieberman.

Shaw co-anchored CNN's Inside Politics from 1992 until he retired from CNN in 2001. He has still occasionally appeared on CNN, including in May 2005 when a plane flew into restricted air space in Washington, D.C. He also co-anchored Judy Woodruff's last broadcast on CNN in June 2005.