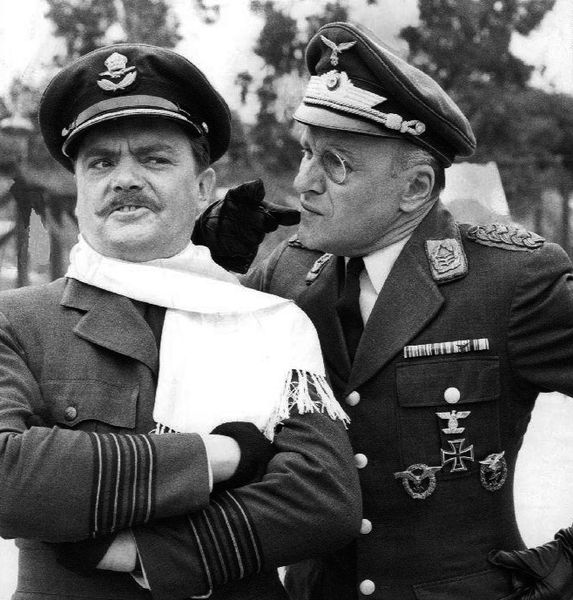 Fox was a fifth-generation performer.[1] He was born in Port Talbot, Glamorgan, the son of Queenie (née Barrett) and Gerald Lawson, both stage actors.[2][3][4] He had an older sister, Mavis, and his uncle was English actor Wilfrid Lawson.[5]
Read more...

Fox began his film career at the age of 18 months, and by the age of 14 he was an apprentice assistant manager of a theatre. After serving with the Royal Navy in World War II he resumed his acting career and appeared in over 30 cinema films from 1956 to 2004, include both cinematic dramatizations of the sinking of the great passenger liner the RMS Titanic, separated by 39 years, viz, Titanic (1997) (as Colonel Archibald Gracie IV) and the earlier version of the tragedy A Night to Remember (1958) (uncredited as Frederick Fleet). In the latter, he delivered the line "Iceberg dead ahead, sir!" while playing the part of the sailor in the ship's crow's nest. His other screen roles ranged from supporting parts in broad comedies (Yellowbeard, Herbie Goes to Monte Carlo, and The Private Eyes, playing a homicidal butler in the last) to supplying the voice of the Chairmouse in the Disney animated features The Rescuers and The Rescuers Down Under. He played the role of Winston Havelock, a put out to grass former Royal Flying Corps airman in the 1999 adventure film The Mummy. In 2004, Fox made his final appearance before retirement in Surge of Power: The Stuff of Heroes.

On television, Fox portrayed the witch doctor Dr. Bombay on Bewitched and the inept "Colonel" Crittendon (actually an RAF Group Captain, though always referred to as a Colonel) on Hogan's Heroes. However, his first appearance in Bewitched was not as Dr. Bombay, but as a professional witch debunker. He reprised the role of Dr. Bombay on the 1977 sequel series Tabitha, and again in 1999 on the soap opera Passions, and spoofed it as a genie doctor ("wish doctor") in a 1989 episode of Pee-wee's Playhouse. He appeared in two episodes in the mystery series Columbo, "Dagger of the Mind" and "Troubled Waters". Fox was the penultimate surviving adult recurring cast member of the sitcom Bewitched, leaving Nancy Kovack (who portrayed character Darrin Stephens' ex-girlfriend Sheila throughout the series) as the only remaining adult cast member upon his death; child actors Erin Murphy and David Lawrence, who portrayed Darrin and Samantha's children (Tabitha and Adam) are also still alive. Fox also appeared as English valet Malcolm Meriweather in two episodes of the The Andy Griffith Show, and in Knight Rider as Commander Smiths in season 2, episode 8.

Fox appeared as a British Major in "The Phantom Major," episode 3 of F Troop, and in "Tea and Empathy," episode 17 of season 6 of M*A*S*H. In 1964, Fox appeared in episode 117 of The Dick Van Dyke Show, titled "Girls Will Be Boys." Fox plays the father of a little girl who keeps beating up Richie Petrie. He also appeared in episode 95, "Teacher's Petrie," where he played a night school creative writing teacher, and in "Never Bathe on Saturday" as the house detective. In 1965 Fox made a guest appearance on Perry Mason as murderer Peter Stange in "The Case of the Laughing Lady."

Fox also appeared in McHale's Navy; in The Man from U.N.C.L.E. ("The Thor Affair" episode as munitions magnate Brutus Thor, intent on assassinating a "Gandhi-like" figure who's attempting to bring world peace (1966) as well as in the two-part episode "The Bridge of Lion's Affair" in 1966, wherein he starred as THRUSH agent Jordin, whose constant response to each additional assignment is "I'll look into it"); and in the Murder, She Wrote episode "One White Rose for Death" in 1986. In addition, he co-starred with Michael Evans as Dr. Watson in "Sherlock & Me" in the early 1980s.

On the morning of 14 December 2016, Fox died of heart failure at Valley Presbyterian Hospital in Van Nuys, California.[6] He was 89 years old.[7]