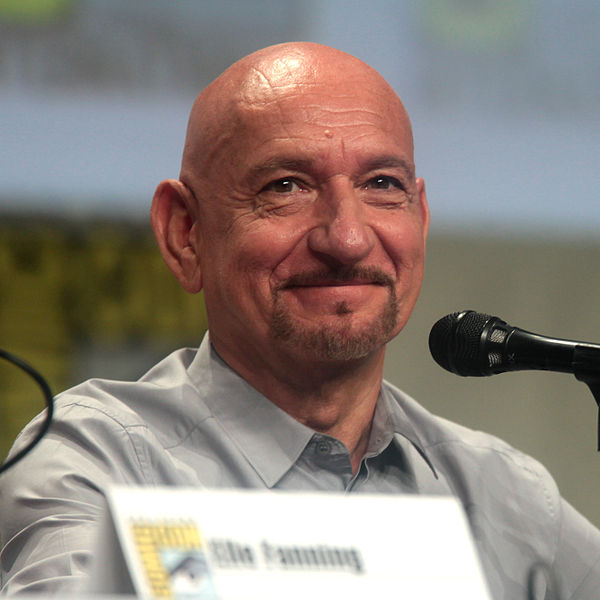 Kingsley was appointed Knight Bachelor in 2002 for services to the British film industry.[5] In 2010, he was awarded a star on the Hollywood Walk of Fame.[6] In 2013, he received the BAFTA Los Angeles Britannia Award for Worldwide Contribution to Filmed Entertainment.[7]

Kingsley's mother was British; she was born out of wedlock, and "was loath to speak of her background".[10][11] Kingsley's father, born in Kenya, was of Gujarati descent.[12] Kingsley's paternal grandfather was an extremely successful spice trader who had moved from India to Zanzibar, where Kingsley's father lived until moving to Britain at the age of 14.[13][14][15] Kingsley's maternal grandfather was believed by the family to have been of Russian- or German-Jewish descent, while Kingsley's maternal grandmother was of English background, and worked in the garment district of East London.[16] Kingsley stated in 1994: "I'm not Jewish... and though there might be some Russian-Jewish heritage way back on my mother's side, the thread is so fine there's no real evidence."[2][17]

Kingsley grew up in Pendlebury, near Manchester. He was educated at Manchester Grammar School, where one of his classmates was the actor Robert Powell.[18]

Kingsley studied at De La Salle College in Salford, which later became home to the Ben Kingsley Theatre. While at college he became involved in amateur dramatics in Manchester, making his professional stage debut on graduation, aged 23. In 1967, he made his London West End theatre debut at the Aldwych Theatre. Later, he was spotted by music producer and manager Dick James, who offered to mould Kingsley into a pop star, but Kingsley chose to join the Royal Shakespeare Company after an audition before Trevor Nunn.

Devoting himself almost exclusively to stage work for the next 15 years, he made his Broadway debut in 1971 with the RSC. Kingsley played Mosca in Peter Hall's 1977 production of Ben Jonson's Volpone for the Royal National Theatre, and in Peter Brook's acclaimed production of A Midsummer Night's Dream. At about this time, he changed his name to Ben Kingsley, fearing that a foreign name would hamper his career.[19][20] He took his stage name from his father's nickname (at Dulwich College) of "Benji" and his paternal grandfather's nickname of "King Cloves".[2] He also starred in the role of Willy Loman in a 1982 Sydney production of Death of a Salesman opposite Mel Gibson.

Kingsley made the transition to film roles early on, with his first role coming in Fear Is the Key, released in 1972. Kingsley continued starring in bit roles in both film and television, including a role as Ron Jenkins on the soap opera Coronation Street from 1966 to 1967 and regular appearances as a defence counsel in the long-running British legal programme Crown Court. In 1975, he starred as Dante Gabriel Rossetti in the BBCs historical drama The Love School and appeared in the TV miniseries Dickens of London the following year. He found fame as Mohandas Gandhi in the Academy Award-winning film Gandhi in 1982. The film was a critical and financial success, and Kingsley won the Academy Award for Best Actor for his performance.[19]

Kingsley has since appeared in a variety of roles. His credits included the films Turtle Diary, Maurice, Pascali's Island, Without a Clue (as Dr. Watson alongside Michael Caine's Sherlock Holmes), Suspect Zero, Bugsy (nominated for Best Supporting Actor), Sneakers, Dave, Searching for Bobby Fischer, Schindler's List, Silas Marner, Death and the Maiden, Sexy Beast, for which he received another Academy Award nomination for Best Supporting Actor, and House of Sand and Fog, which led to an Oscar nomination for Best Actor. He won a Crystal Globe award for outstanding artistic contribution to world cinema at the Karlovy Vary International Film Festival in 2001.[21]

In 1997, he provided a voice in the video game Ceremony of Innocence. In 1998, he was the head of the jury at the 48th Berlin International Film Festival.[22]

In July 2006, he received an Emmy nomination for his performance in the made-for-TV film Mrs. Harris, in which he played famed cardiologist Herman Tarnower, who was murdered by his jilted lover, Jean Harris. Later that year, Kingsley appeared in an episode of The Sopranos entitled "Luxury Lounge", playing himself. In 2007, Kingsley appeared as a Polish American mobster in the Mafia comedy You Kill Me, and a hitman in War, Inc.

In 2010, Kingsley worked voicing a character named Sabine in Lionhead Studios game Fable III and starred alongside Leonardo DiCaprio in Shutter Island, directed by Martin Scorsese. He also appeared in Scorsese's next film, Hugo, and signed up to appear in a new feature by Neil Jordan and John Boorman entitled Broken Dream.[23]

In 2013, he appeared as Trevor Slattery in Iron Man 3, and as the hero Mazer Rackham in Ender's Game.

Kingsley's 2014 film roles included Exodus: Gods and Kings, as Nun, a Hebrew slave, and Night at the Museum: Secret of the Tomb, as Merenkahre, a simulacrum of an Egyptian pharaoh (in one scene, the character discusses his Hebrew slaves).[24]

In 2015, Kingsley played a driving instructor in the film Learning to Drive.[25] He voiced Bagheera in Disney's reboot of The Jungle Book,[26] and recorded Yogananda's Autobiography of a Yogi in book-on-tape format.

Kingsley has been married four times and has four children: Thomas Bhanji and artist Jasmin Bhanji, with actress Angela Morant; and Edmund Kingsley and Ferdinand Kingsley, both of whom became actors, with theatrical director Alison Sutcliffe.[27] He divorced Alexandra Christmann, originally from Germany, in 2005, having been "deeply, deeply shocked" after pictures of her kissing another man surfaced on the internet.[28] On 3 September 2007, Kingsley married Daniela Lavender, a Brazilian actress, at Eynsham Hall, in North Leigh, Oxfordshire.[29]

Kingsley at the 2008 Tribeca Film Festival

Kingsley was created a Knight Bachelor in the 2002 New Year Honours for services to the British film industry.[5][30] The award was announced on 31 December 2001, which happened to be Kingsley's 58th birthday.[31] After receiving his award from Elizabeth II at Buckingham Palace, Kingsley stated; "I told the Queen that winning an Oscar pales into insignificance - this is insurmountable. I'm fascinated by the ancient, by mythology, by these islands and their tradition of story telling. I feel that I am a story teller and to receive a knighthood is really recognition of that."[5] His demand to be called 'Sir' was documented by the BBC, to some criticism.[32] Since then, Kingsley appears to have altered his stance; credits for his latest films refer to him as Ben Kingsley. Co-star Penélope Cruz was reportedly unsure what to call him during the filming of Elegy as someone had told her she needed to refer to him as "Sir Ben". One day it slipped out as such, and she called him that for the remainder of the shoot.[33] Kingsley has denied accusations that he prefers to be referred to by his title, saying, "If I've ever insisted on being called 'Sir' by colleagues on a film set then I am profoundly sorry. I don't remember ever doing that and I tend not to forget."[34]

In 1984, he won a Grammy Award for Best Spoken Word or Nonmusical Recording for The Words of Gandhi. He was awarded the Indian civilian honour Padma Shri in 1984.[35] In May 2010, Kingsley was awarded a star on the Hollywood Walk of Fame.[6] In April 2013, Kingsley was honoured with the Fellowship Award at The Asian Awards in London.[36]