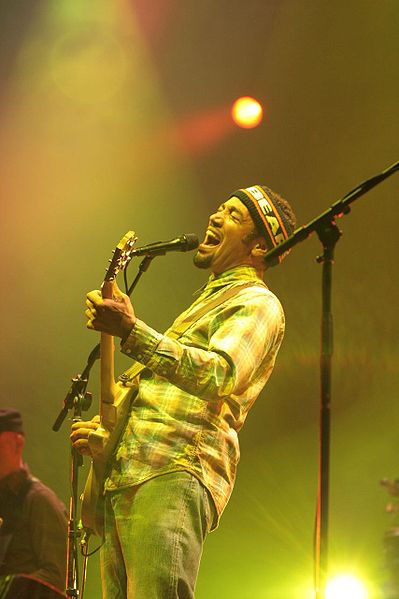 Benjamin Chase "Ben" Harper (born October 28, 1969) is an American singer-songwriter and multi-instrumentalist. Harper plays an eclectic mix of blues, folk, soul, reggae and rock music and is known for his guitar-playing skills, vocals, live performances, and activism. He has released twelve regular studio albums, mostly through Virgin Records and has toured internationally. Harper is a three-time Grammy Award winner as well, winning awards for Best Pop Instrumental Performance and Best Traditional Soul Gospel Album, in 2005. He also won a Grammy for Best Blues Album in 2014.

Harper was born in Pomona, California. His father, Leonard, was of African-American and possibly Cherokee ancestry, and his mother, Ellen Chase-Verdries, is Jewish. His maternal great-grandmother was a Russian-Lithuanian Jew. His parents divorced when he was five years old, and he grew up with his mother's family. Harper has two brothers, Joel and Peter.

Harper began playing guitar as a child. His maternal grandparents' music store The Folk Music Center and Museum laid a foundation of folk and blues for the artist, complemented by regular patrons Leonard Cohen, Taj Mahal, John Darnielle, and David Lindley and quotes of William Shakespeare and Robert Frost made often by his grandfather.

In 1978, at the age of 9, Harper attended reggae superstar Bob Marley's performance in Burbank, California (Marley was joined by former bandmate Peter Tosh for the encore, making this concert a historic performance), which was, according to Harper, an important influence. At the age of 12, Harper played his first gig. During the 1980s, in his teen years, Harper began to play the slide guitar, mimicking the style of Robert Johnson. Harper refined his style, taking up the Weissenborn slide guitar. Harper broke out of the Inland Empire after being offered an invitation by Taj Mahal to tour with the artist. They recorded Taj Mahal's album Follow the Drinking Gourd, released in November 1990, and toured Hawaii.

In 1992, Harper recorded the LP Pleasure and Pain with Folk multi-instrumentalist Tom Freund. After this limited edition record, Harper secured a lifetime record deal with Virgin Records, which released his debut album, Welcome to the Cruel World in 1994. This allowed him to be invited at the Rencontres Trans Musicales of Rennes in France in December 1993 where he went up for the first time on a large stage. The first album was followed by Fight For Your Mind in 1995, with Juan Nelson on bass, which became a college radio favorite and included several songs that Harper still plays live regularly.

In 1999, at the Santa Barbara Bowl, Harper met Jack Johnson and sent a demo tape of Johnson's songs to his producer, J.P. Plunier, who then produced Johnson's first album.

Early in Harper's career, his music received more attention in Europe and was widely played in Australia (first on Triple J radio). Harper has made comments on a number of occasions that his career was kicked off in Australia. While he was a well-known and respected figure in the United States, he was a star in countries like Australia, New Zealand, France, Portugal, Germany, Switzerland and the Netherlands, receiving a great deal of airplay and critical acclaim. His popularity in Europe is such that he was French Rolling Stone magazine's Artist of the Year (Artiste De L'Année) in 2003, and his Australian tour that year for Diamonds on the Inside was highly successful.

In 2002, Harper was one of the featured singers covering Motown hits by Marvin Gaye in the documentary, Standing in the Shadows of Motown (a history of The Funk Brothers). In October 2004, Harper participated in the Vote for Change concert tour organized to benefit Moveon.org and encourage people in the swing states to vote during the 2004 U.S. presidential election. In the same month, Harper contributed a live recording of the song "Oppression" to For The Lady, a benefit album for jailed Nobel Peace Prize winner and Burmese pro-democracy advocate Aung San Suu Kyi. In 2006, Harper released the double album Both Sides of the Gun which debuted at #7 on the Billboard charts. Though uncredited, he appears briefly in the 2006 David Lynch film Inland Empire, alongside his wife Laura Dern.

Harper is part of the No Nukes group which is against the expansion of nuclear power. In 2007 the group recorded a music video of a new version of the Buffalo Springfield song "For What It's Worth". Harper's collaboration "Boa Sorte/Good Luck" with Brazilian singer Vanessa da Mata peaked at #1 in Brazil and Portugal. In Brazil it also won a highly coveted Prêmio Multishow for "Best Song" in 2008. Also in 2008, Harper participated in the benefit album Songs for Tibet.

On August 27, 2010, it was reported that Ben Harper had formed a band called Fistful of Mercy with Dhani Harrison and Joseph Arthur. Fistful of Mercy released their debut record, As I Call You Down, on October 5, 2010.

On May 17, 2011, Ben Harper's official site posted that his next album was released, entitled Give Till It's Gone. The album is a continuation of recording with Relentless7.

On October 1, 2012, a new album from Ben Harper with Charlie Musselwhite was announced entitled Get Up! on Stax Records / Concord Music Group. The official release date for the album is January 29, 2013. Get Up! was recorded in Los Angeles and produced by Ben Harper. It is Ben's 12th studio album and first new recording since 2011's Give Till It's Gone (Virgin).

In December 2012, it was announced that Ben Harper had co-produced lead vocalist Natalie Maines of the Dixie Chicks first solo rock album Mother. It was released on May 7, 2013.

Harper began dating actress Laura Dern after they met at one of his concerts in fall 2000. Harper and Dern married on December 23, 2005 at their home in Los Angeles. They have two children, son Ellery Walker (born August 2001) and daughter Jaya (born November 2004). In October 2010, Harper filed for divorce from Dern, citing irreconcilable differences. They briefly reconciled and attended the 2012 Golden Globe Awards together, but Dern reactivated the divorce by filing a legal response in July 2012. The divorce was finalized in September 2013.