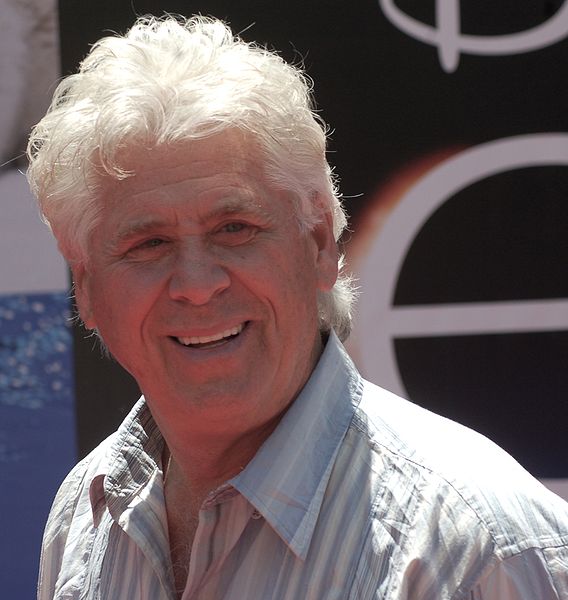 Barry Knapp Bostwick (born February 24, 1945) is an American stage and screen actor and singer. He is best known for portraying Brad Majors in the musical comedy horror The Rocky Horror Picture Show (1975) and Mayor Randall Winston in the sitcom Spin City (1996-2002). Bostwick has also had considerable success in musical theatre, winning a Tony Award for his role in the musical The Robber Bridegroom.

Bostwick was born in San Mateo, California. He is the son of Elizabeth "Betty" (née Defendorf), a housewife, and Henry "Bud" Bostwick, a city planner and actor.[1][2] His only sibling, Henry "Pete" Bostwick, was killed in a car accident on July 20, 1973.[3] Bostwick attended San Diego's United States International University in 1967, majoring in acting, got his start on the Hillbarn Theatre stage now located in Foster City, and worked for a time as a circus performer. He also attended NYU's Graduate Acting Program, graduating in 1968.[4]
Read more...

In 1970, Bostwick was a member of a pop group called The Klowns, assembled and promoted by Ringling Bros. and Barnum & Bailey Circus, whose members performed wearing stylized clown makeup and costumes. Their sole album, released in 1970, was produced by Jeff Barry, and generated a minor Billboard hit single, "Lady Love".

Bostwick replaced C.C. Courtney in the musical Salvation. His next stage appearance was in the 1971 rock opera Soon, which closed after three performances. In 1972, Bostwick originated the role of bad boy Danny Zuko in the stage production of Grease, earning a Tony Award nomination for his performance. This was followed by a voice role as Terr in the English-dubbed version of Fantastic Planet in 1973. He later starred with Tim Curry and Susan Sarandon in The Rocky Horror Picture Show (1975) portraying the character of Brad Majors. He also won a Tony Award for his performance in the 1977 musical The Robber Bridegroom. In 1981, Bostwick starred in the TV series adaptation of the 1978 movie Foul Play, with his role modeled after Chevy Chase's and co-star Deborah Raffin in Goldie Hawn's part. The following year, he starred in Megaforce. Bostwick starred, along with Carl Weintraub, as Rick Armstrong in the short-lived ABC sitcom Dads during the 1986-87 season. From 1996 to 2002, Bostwick portrayed Randall Winston, the mayor of New York City in the sitcom Spin City opposite Michael J. Fox and his successor, Charlie Sheen. In 2006, Bostwick replaced Peter Scolari as Mr. Tyler, the father of Amanda Bynes' and Jennie Garth's lead characters, on What I Like About You.[5]

Bostwick had a recurring role between 2004 and 2007 on Law & Order: Special Victims Unit. He has also had leading roles in various miniseries, including George Washington, its sequel George Washington II: The Forging of a Nation, Scruples, A Woman of Substance, War and Remembrance, and Till We Meet Again.

Bostwick served as host of the nationally televised annual Capitol Fourth celebration on the National Mall in Washington, D.C. for eight years. Bostwick was also seen in a Pepsi Twist commercial. In the Cold Case episode "Creatures of the Night", in which he is the main suspect, the theme of the episode revolves around The Rocky Horror Picture Show, which is among his best-known performances to date.

In 2003, Bostwick appeared on Scrubs as a patient diagnosed with prostate cancer, a disease Bostwick had in real life. In 2008, he appeared in an episode of TV series Ugly Betty as an attorney to the Meade family. In 2007, Bostwick gained a recurring role, as Grandpa Clyde Flynn on the animated television series, Phineas and Ferb. Bostwick is also the spokesperson for Optimum Voice.[6] In June 2009 he played Father Jimmy, the ineffective exorcist in the independent horror comedy The Selling, written by Gabriel Diani and directed by Emily Lou.

Other television credits include guest appearances in Charlie's Angels, Hawaii Five-O, The Golden Palace, Grace Under Fire, and Las Vegas.

Bostwick was supposed to appear on season 3 of Private Practice as "the Captain", a father of the Addison Montgomery character, but had to resign due to a scheduling conflict.[7] In 2011, Bostwick portrayed a small town sheriff in the John Landis-produced thriller Some Guy Who Kills People![8]

Bostwick at the premiere for Earth in April 2009

Since 2009, Bostwick has had a recurring role as Roger Frank on the sitcom Cougar Town which stars Courteney Cox. In season 3 of the show we learn that Bostwick's character has become mayor of the town the comedy is set in, Gulf Haven. In 2015, he starred in Darren Lynn Bousman's segment of the anthology film Tales of Halloween, which was his second time acting under Bousman after The Devil's Carnival,[10] and appeared in the comedy horror film Helen Keller vs. Nightwolves.[11] In 2015 he portrayed Collin Winthrop, father of the Gig Harbor Killer, in the season-ending CSI: Crime Scene Investigation episode "The End Game".[12] He has also had a return to cult musical horror films in the form of Terrance Zdunich's Alleluia! The Devil's Carnival, which is a sequel to the 2012 short film The Devil's Carnival, which he was not previously a cast member of, being a newcomer to the franchise.

Bostwick married Stacey Nelkin in 1987, and they were divorced in 1991. Bostwick married his second wife Sherri Ellen Jensen in 1993; they have two children, a son and a daughter.[13]

In 1997, Bostwick was diagnosed with prostate cancer, and had his prostate removed in July 1997. [14] In 2004, he won the Gilda Radner Courage Award from the Roswell Park Cancer Institute.[citation needed]