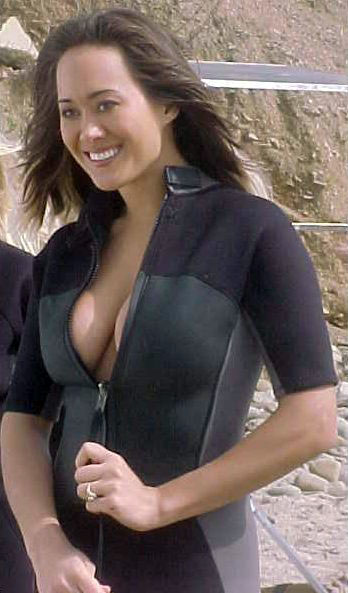 Asia Carrera was born Jessica Steinhauser[5][6] in New York City to a German mother and Japanese father,[7] the eldest of four siblings.[8] She was raised on Lippincott Road[9] in Little Silver, New Jersey, attending the Little Silver School District[citation needed] and Red Bank Regional High School.[10][11] She studied piano as a child and performed at Carnegie Hall twice before the age of 15.[citation needed] At the age of 16, she taught English at Tsuruga College in Tsuruga, Fukui, Japan.[12]

Carrera won a National Merit Scholarship for scoring over 1440 on the SAT, as well as a Garden State Scholarship for her grades. She attended Rutgers University on full academic scholarship, where she majored in Japanese and business, but did not graduate.[2] Carrera is a member of Mensa,[2][12][13] with an IQ of 156.[1][14]

Carrera's adult film career ran from 1993 to 2003 and included over 400 films and video features.[15] According to interviews, she chose her stage name surname from actress Tia Carrere, changing the spelling for legal reasons.[16]

Carrera was the first Asian performer ever to win the award AVN Female Performer of the Year Award.[17] Carrera retired from the film industry in 2003, following her marriage to Don Lemmon.[2]

In 1998, she appeared in an uncredited cameo role in the film The Big Lebowski in the faux pornographic movie Logjammin' within the film.[23][24]

Carrera was a guest reviewer for Maximum PC magazine.[25]

Carrera is an atheist.[6][26] As of November 2014, she wore a colander on her head for her Utah driver's license photograph. State law normally prohibits the wearing of hats in driver license photos, but there is an exception for religious headwear, and Carerra's colander was worn in honor of the religion of the Flying Spaghetti Monster.[1][4] She is one of about a dozen "Pastafarian" Utahns who have worn a colander in their official state ID photos.[27]

On April 14, 2010, she confessed on her blog that she became an alcoholic after her husband's death, that she had joined Alcoholics Anonymous, and was in her third week of sobriety. She emphasized that she still did not believe in God, as such a belief is "actually not mandatory for joining AA."[32]

She identified investor Warren Buffett as her hero on her website,[33] which Buffett was pleased to learn.[34]

In 2017, Carrera began studies at Dixie State University with her daughter.[35]