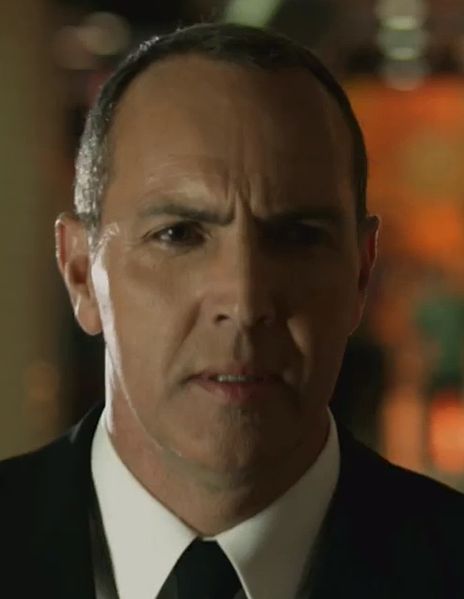 Arnold Vosloo (born 16 June 1962) is a South African actor. He is known for his roles as Imhotep in The Mummy and The Mummy Returns, Colonel Coetzee in Blood Diamond, Pik van Cleef in Hard Target, Dr. Peyton Westlake / Darkman in Darkman II and Darkman III, Zartan in G.I. Joe: The Rise of Cobra and its sequel, and terrorist Habib Marwan during the fourth season of 24.

An Afrikaner of Dutch and German ancestry,[1] Vosloo was born into a Pretoria acting family, his parents having been stage-actors. They lived in Despatch, where his father ran a drive-in theater, and Alberton. He has one sister. After high school and military service (from which he received a medical discharge),[2] he took drama courses at the Pretoria Technikon.[1]
Read more...

Vosloo began his acting career in the South African theatre where he won several Dalro Awards for his performances in such plays as Don Juan, Hamlet, and Môre is 'n Lang Dag (Tomorrow is a Long Day) and he quickly became a regular at Pretoria's State Theatre. He also starred in Torch Song Trilogy and won another award for the TV show, Meisie van Suid-Wes (Girl from South West).

In 1984, he moved on to film where he continued Dalro Award-winning performances in films such as Boetie gaan Border toe (Boetie goes to the border, a comedy about the Border War) acting alongside fellow South African actor Frank Opperman, and Circles in a Forest (based on the book Kringe in 'n Bos by author Dalene Matthee) in 1990. Vosloo also starred in the "Boetie" sequel, Boetie op maneuvers (Boetie on maneuvers) in 1986. Vosloo also starred in Morenga (1985), Saturday Night at the Palace (based on the play by Paul Slabolepszy about racism in South Africa), Skeleton Coast (1987) and The Rutanga Tapes (1990). Upon arriving in the U.S., Vosloo returned to the theatre where he appeared in Born In The R.S.A. at Chicago's Northlight Theatre and in the NY's Circle In The Square Uptown's short-lived production of Salomé (1992) together with Al Pacino.[citation needed]

His American film debut was in 1492: Conquest of Paradise (1992). He later appeared in the two less successful sequels to the 1990 film Darkman, Darkman II: The Return of Durant (1994) and Darkman III: Die Darkman Die (1996), filling the shoes of Liam Neeson as the titular character Darkman. He's also known for portraying villains such in the John Woo film Hard Target (1993), starring Jean-Claude Van Damme. He played the title role of the 1999 film The Mummy (starring Brendan Fraser), as well as its 2001 sequel, The Mummy Returns. In both films he played Imhotep, an ancient Egyptian high priest. Vosloo also played François Molay, the main villain's henchman, in the 2003 film Agent Cody Banks.

In 2004, The Revenge of the Mummy: The Ride opened in both Universal Studios theme parks in Orlando and Hollywood. Vosloo and Fraser were there at both openings to promote the new rides, in which both of them star, as well as featuring a life size image of Vosloo as The Mummy.

In 2004, Vosloo returned to South Africa to make Forgiveness, about an ex-policeman who seeks out the family of the anti-Apartheid activist that he killed. He played mercenary Colonel Coetzee in the 2006 film Blood Diamond, which was partially filmed in South Africa. Vosloo has been involved in video games: His likeness, as well as his voice, was chosen for main hero (Saul Myers) of video game Boiling Point: Road to Hell, published in summer of 2005 by ATARI. Vosloo portrayed the Cobra mercenary and master of disguise, Zartan, in the summer 2009 release G.I. Joe: The Rise of Cobra.[3]

In an interview with Charlie Rose, Vosloo noted he looked similar to American actor Billy Zane. According to Vosloo, when people came asking him if he was "the guy in Titanic", he replied "of course, of course!" as a joke.[5] Zane's own instagram bio reads "Not The Mummy. Bad on a boat."[6]

Report a problem
Write to Arnold Vosloo at FanPal • 2021