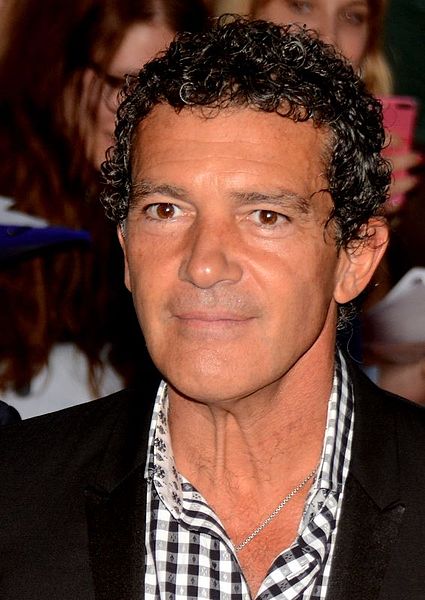 José Antonio Domínguez Bandera[1] (born 10 August 1960), known professionally as Antonio Banderas, is a Spanish actor, singer, and producer. He began his acting career with a series of films by director Pedro Almodóvar and then appeared in high-profile Hollywood films, especially in the 1990s, including Assassins, Evita, Interview with the Vampire, Philadelphia, Desperado, The Mask of Zorro, Take the Lead, The Expendables 3 and Spy Kids. Banderas also portrayed the voice of Puss in Boots in the Shrek sequels and Puss in Boots as well as the bee in the US Nasonex commercials.

Banderas[1] was born on 10 August 1960, in the Andalusian city of Málaga, to José Domínguez Prieto (1920-2008), a police officer in the Civil Guard, and Ana Bandera Gallego (1933-2017), a school teacher.[2][3] He has a brother, Francisco Javier.[3] Although his father's family name is Domínguez, he took his mother's last name as his stage name.[4] As a child, he wanted to become a professional football player until a broken foot sidelined his dreams at the age of fourteen. He showed a strong interest in the performing arts and formed part of the ARA Theatre-School run by Ángeles Rubio-Argüelles y Alessandri (wife of diplomat, writer and film director Edgar Neville) and the College of Dramatic Art, both in Málaga. His work in the theater, and his performances on the streets, eventually landed him a spot with the Spanish National Theatre.[5]
Read more...

Banderas began working in small shops during Spain's post-dictatorial cultural movement known as the La Movida Madrileña.[6] While performing with the theatre, Banderas caught the attention of Spanish director Pedro Almodóvar, who cast the young actor in his 1982 movie debut Labyrinth of Passion. Five years later, he went on to appear in the director's Law of Desire, making headlines with his performance as a gay man, which required him to engage in his first male-to-male onscreen kiss. After Banderas appeared in Almodóvar's 1986 Matador, the director cast him in his internationally acclaimed 1988 film, Women on the Verge of a Nervous Breakdown. The recognition Banderas gained for his role increased two years later when he starred in Almodóvar's controversial Tie Me Up! Tie Me Down! as a mental patient who kidnaps a porn star (Victoria Abril) and keeps her tied up until she returns his love.[5] It was his breakthrough role in Tie Me Up! Tie Me Down!, that helped spur him on to Hollywood.[7] Almodóvar is credited for helping launch Banderas's international career, as he became a regular feature in his movies throughout the 1980s.[8]

In 1991, Madonna introduced Banderas to Hollywood. The following year, still speaking minimal English, he began acting in U.S. films. Despite having to learn all his lines phonetically, Banderas still managed to turn in a critically praised performance as a struggling musician in his first American drama film, The Mambo Kings (1992).[9]

Banderas then broke through to mainstream American audiences in the film Philadelphia (1993), as the lover of lawyer Andrew Beckett (Tom Hanks), who has AIDS. The film's success earned Banderas wide recognition, and the following year he was given a role in Neil Jordan's high-profile adaptation of Anne Rice's Interview with the Vampire, sharing the screen with Brad Pitt.[5]

He appeared in several major Hollywood releases in 1995, including a starring role in the Robert Rodriguez-directed film Desperado and the antagonist on the action film Assassins, co-starred with Sylvester Stallone. In 1996, he starred alongside Madonna in Evita, an adaptation of the musical by Andrew Lloyd Webber and Tim Rice in which he played the narrator, Che, a role played by David Essex in the original 1978 West End production. He also made success with his role as the legendary masked swordsman Zorro in the 1998 film The Mask of Zorro. In 1999 he starred in The 13th Warrior, a movie about a Muslim caught up in a war between the Northman and human eating beasts.

In 2001, he collaborated with Robert Rodriguez who cast him in the Spy Kids film trilogy. He also starred in Michael Cristofer's Original Sin alongside Angelina Jolie the same year. In 2002, he starred in Brian De Palma's Femme Fatale opposite Rebecca Romijn and in Julie Taymor's Frida with Salma Hayek. In 2003, he starred in the last installment of the trilogy Once Upon a Time in Mexico (in which he appeared with Johnny Depp and Hayek). Banderas' debut as a director was the poorly received Crazy in Alabama (1999), starring his then wife Melanie Griffith.[10]

In 2003, he returned to the musical genre, appearing to great acclaim in the Broadway revival of Maury Yeston's musical Nine, based on the film 8½, playing the prime role originated by Raúl Juliá. Banderas won both the Outer Critics Circle and Drama Desk awards, and was nominated for the Tony Award for best actor in a musical.[11] His performance is preserved on the Broadway cast recording released by PS Classics. Later that year, he received the Rita Moreno HOLA Award for Excellence from the Hispanic Organization of Latin Actors (HOLA).[12]

Banderas' voice role as Puss in Boots in Shrek 2, Shrek the Third, and the last film in the Shrek franchise, Shrek Forever After, helped make the character popular on the family film circuit. In 2005, he reprised his role as Zorro in The Legend of Zorro, though this was not as successful as The Mask of Zorro. In 2006, he starred in Take the Lead, a high-set movie in which he played a ballroom dancing teacher. That year, he directed his second film El camino de los ingleses, and also received the L.A. Latino International Film Festival's "Gabi" Lifetime Achievement Award on 14 October.[13]

In 2011, the horror thriller The Skin I Live In marked the return of Banderas to Pedro Almodóvar, the Spanish director who launched his international career. The two had not worked together since 1990 (Tie Me Up! Tie Me Down!). In The Skin I Live In he breaks out of the "Latin Lover" mold from his Hollywood work and stars as a calculating revenge-seeking plastic surgeon following the rape of his daughter. According to the Associated Press Banderas' performance is among his strongest in recent memory.[8] He again lent his voice to Puss in Boots, this time as the protagonist of the Shrek spin-off prequel, Puss in Boots. This film reunited Banderas with Salma Hayek for the sixth time.[14]

He has invested some of his film earnings in Andalusian products, which he promotes in Spain and the US. He owns 50% of a winery in Villalba de Duero, Burgos, Spain, called Anta Banderas, which produces red and rosé wines.[15]

He performed a voice-over for a computer-animated bee which can be seen in the United States in television commercials for Nasonex,[16] an allergy medication, and was seen in the 2007 Christmas advertising campaign for Marks & Spencer, a British retailer.[17]

He is a veteran of the perfume industry. The actor has been working with fragrance and beauty multinational company Puig for over ten years becoming one of the brand's most successful representatives. Banderas and Puig have successfully promoted a number of fragrances so far - Diavolo, Diavolo for Women, Mediterraneo, Spirit, and Spirit for Women. After the success of Antonio for Men and Blue Seduction for Men in 2007, launched his latest Blue Seduction for Women the following year.[18]

Banderas with Melanie Griffith at the Shrek Forever After premiere in May 2010.

Banderas married Ana Leza in 1986 or 1988 (sources differ) and divorced in 1996.[2] Banderas met and began a relationship with actress Melanie Griffith in 1995 while shooting Two Much.[6][19] They married on 14 May 1996 in London.[20] They have a daughter, Stella del Carmen Bandera (born 24 September 1996),[21] who appeared onscreen with Griffith in Banderas' directorial debut, Crazy in Alabama (1999).[22] In 2002, the couple received the Stella Adler Angel Award for their extensive philanthropy.[23] Griffith has a tattoo of Banderas' name on her right arm.[24] In June 2014, Griffith and Banderas released a statement announcing their intention to divorce "in a loving and friendly manner".[25] According to the petition filed in the Los Angeles Superior Court, the couple had "irreconcilable differences" that led to their separation.[26] The divorce became official in December 2015.[27]

In 1996, Banderas appeared among other figures of Spanish culture in a video supporting the Spanish Socialist Workers' Party lists in the general election.

A longtime supporter of Málaga CF,[28] he is also an officer (mayordomo de trono) of a Roman Catholic religious brotherhood in Málaga and travels during Holy Week to take part in the processions,[29] although in an interview with People magazine, Banderas had once described himself as an agnostic.[30]

Banderas has always struggled with the pronunciation of certain English words, as he mentioned in a 2011 article with GQ Magazine. "The word that really gets me is animals, I just can never say it properly, whenever it is in a film I have to get it changed for a synonym." "In Zorro, I had a line changed from 'You look like a bunch of animals' to 'you look like a collection of beasts' it worked much better, so I don't care".[32]

In 2013, he called on Europe and the United States to emulate Hugo Chávez in Venezuela and nationalize big corporations as a solution to the global economic crisis.[32]

In June 2015, Banderas demonstrated his support for Israel by taking part in a massive fund-raising event organized by Friends of the Israeli Defense Forces (FIDF), which raised $31m for Israeli soldiers.[33]

In August 2015, Banderas enrolled in a fashion-design course at Central Saint Martins.[34]

In 2018 he was cast with Penélope Cruz in the Spanish film Dolor y gloria, directed by Pedro Almodóvar.[35]