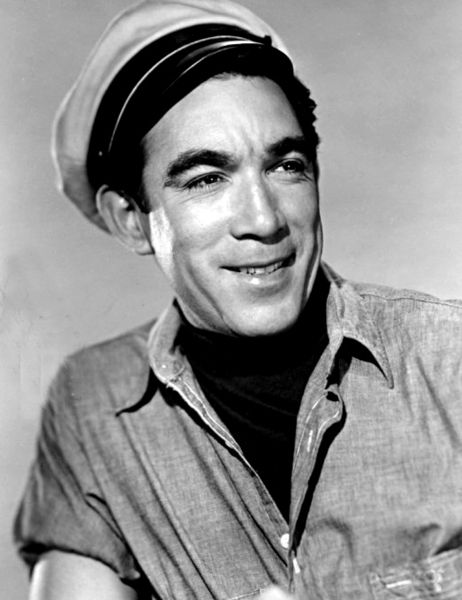 Antonio Rodolfo Quinn Oaxaca (April 21, 1915 – June 3, 2001),[1] more commonly known as Anthony Quinn, was a Mexican actor, painter and writer. He starred in numerous critically acclaimed and commercially successful films, including La Strada, The Guns of Navarone, Zorba the Greek, Guns for San Sebastian, Lawrence of Arabia, The Shoes of the Fisherman, The Message, Lion of the Desert, Last Action Hero and A Walk in the Clouds. He won the Academy Award for Best Supporting Actor twice: for Viva Zapata! in 1952 and Lust for Life in 1956.

Quinn was born Antonio Rodolfo Quiñones Oaxaca on April 21, 1915, in Chihuahua, Mexico, during the Mexican Revolution to Manuela "Nellie" (née Oaxaca)[2] and Francisco "Frank" Quinn.[3][4] Francisco Quinn was born in Mexico, to an Irish immigrant father from County Cork and a Mexican mother.[5] Frank Quinn rode with Mexican revolutionary Pancho Villa,[3] then later moved to the East Los Angeles neighborhood of City Terrace and became an assistant cameraman at a movie studio. In Quinn's autobiography, The Original Sin: A Self-portrait by Anthony Quinn, he denied being the son of an "Irish adventurer" and attributed that tale to Hollywood publicists.

When he was six years old, Quinn attended a Catholic church (even thinking he wanted to become a priest). At age eleven, however, he joined the Pentecostals in the International Church of the Foursquare Gospel (the Pentecostal followers of Aimee Semple McPherson).[6] For a time he played in the church's band and was an apprentice preacher with the renowned evangelist. "I have known most of the great actresses of my time, and not one of them could touch her", Quinn once said of the spellbinding McPherson, whom he credited with inspiring Zorba's gesture of the dramatically outstretched hand.[7]

As a young man, Quinn boxed professionally to earn money, then studied art and architecture under Frank Lloyd Wright, at Wright's Arizona residence and his Wisconsin studio, Taliesin. The two men became friends. When Quinn mentioned that he was drawn to acting, Wright encouraged him. Quinn said he had been offered $800 per week by a film studio and didn't know what to do. Wright replied, "Take it, you'll never make that much with me."[This quote needs a citation] During a 1999 interview on the show Private Screenings with Robert Osborne, Quinn said the contract was for only $300 per week.[9]

After a short time performing on the stage, Quinn launched his film career performing character roles in the 1936 films The Plainsman (1936) as a Cheyenne Indian after Custer's defeat with Gary Cooper, Parole (in which he made his debut) and The Milky Way. He played "ethnic" villains in Paramount films such as Dangerous to Know (1938) and Road to Morocco, and played a more sympathetic Crazy Horse in They Died with Their Boots On with Errol Flynn.[10]

By 1947, he had appeared in more than fifty films and had played Indians, Mafia dons, Hawaiian chiefs, Filipino freedom-fighters, Chinese guerrillas, and Arab sheiks, but was still not a major star. He returned to the theater, playing Stanley Kowalski in A Streetcar Named Desire on Broadway. In 1947, he became a naturalized citizen of the United States.[4]

He came back to Hollywood in the early 1950s, specializing in tough guy roles. He was cast in a series of B-adventures such as Mask of the Avenger (1951). His big break came from playing opposite Marlon Brando in Elia Kazan's Viva Zapata! (1952). Quinn's performance as Zapata's brother won Quinn an Oscar while Brando lost the Oscar for Best Actor to Gary Cooper in High Noon.[10]

Quinn was the first Mexican-American to win an Academy Award. He appeared in several Italian films starting in 1953, turning in one of his best performances as a dim-witted, thuggish and volatile strongman in Federico Fellini's La Strada (1954) opposite Giulietta Masina. Quinn won his second Oscar for Best Supporting Actor for his portrayal of painter Paul Gauguin in Vincente Minnelli's Lust for Life (1956). The following year, he received an Oscar nomination for his part in George Cukor's Wild Is the Wind. He starred in The Savage Innocents 1959 (film) as Inuk, an Eskimo who finds himself caught between two clashing cultures.[10]

As the decade ended, Quinn allowed his age to show and began his transformation into a major character actor. His physique filled out, his hair grayed, and his once smooth, swarthy face weathered and became more rugged. He played a Greek resistance fighter in The Guns of Navarone (1961), an aging boxer in Requiem for a Heavyweight, and the Bedouin shaikh Auda abu Tayi in Lawrence of Arabia (both 1962). That year he also played the title role in Barabbas, based on a novel by Pär Lagerkvist.[10]

The success of Zorba the Greek in 1964 resulted in another Oscar nomination for Best Actor. Other films included The 25th Hour, The Magus, La Bataille de San Sebastian and The Shoes of the Fisherman.[10] In 1969, he starred in The Secret of Santa Vittoria with Anna Magnani; each was nominated for a Golden Globe Award.[11]

He appeared on Broadway to great acclaim in Becket, as King Henry II to Laurence Olivier's Thomas Becket in 1960. An erroneous story arose in later years that during the run Quinn and Olivier switched roles and Quinn played Becket to Olivier's King. In fact, Quinn left the production for a film, never having played Becket, and director Peter Glenville suggested a road tour with Olivier as Henry. Olivier happily agreed and Arthur Kennedy took on the role of Becket for the tour and brief return to Broadway.[12][13]

Quinn in his Oscar-nominated role of Zorba the Greek

In 1971, after the success of a TV movie named The City, where Quinn played Mayor Thomas Jefferson Alcala, he starred in the television series, The Man and the City. Quinn's subsequent television appearances were sporadic, including Jesus of Nazareth.[10]

In 1976, he starred in the movie Mohammad, Messenger of God (also known as The Message), about the origin of Islam, as Hamza, a highly respected uncle of Mohammad, the prophet of Islam.[10] In 1981, he starred in the Lion of the Desert. Quinn played real-life Bedouin leader Omar Mukhtar who fought Benito Mussolini's Italian troops in the deserts of Libya.[10]

In 1983, he reprised his role as Zorba the Greek for 362 performances in a successful musical version, called Zorba, opposite fellow film co-star Lila Kedrova, reprising her role as Madame Hortense. Quinn performed in the musical both on Broadway and at the Kennedy Center in Washington, D.C.[14]

Although he tried to shake hands with Gotti, federal marshals prevented him from doing so, Davis says. The actor interpreted the testimony of Sammy ("The Bull") Gravano, Gotti's underboss, against Gotti as "a friend who betrays a friend." He had not come to "judge" Gotti, Quinn insisted, but only because he wanted to portray Castellano, who inspired the actor because he had had a "thirty-year-old" mistress, which Quinn believed was "a beautiful thing". He would later portray Gambino family underboss Aniello Dellacroce in the 1996 HBO film Gotti.

Quinn was nominated for a Golden Globe for his performance as Dellacroce.[citation needed]

Art critic Donald Kuspit explains, "Examining Quinn's many expressions of creativity together—his art, collecting, and acting—we can see that he was a creative genius".[17]

Early in life Quinn had an interest in painting and drawing. Throughout his teenage years he won various art competitions in California and focused his studies at Polytechnic High School in Los Angeles on drafting. Later, Quinn studied briefly under Frank Lloyd Wright through the Taliesin Fellowship — an opportunity created by winning first prize in an architectural design contest. Through Wright's recommendation, Quinn took acting lessons as a form of post-operative speech therapy, which led to an acting career that spanned over six decades.[citation needed]

Apart from art classes taken in Chicago during the 1950s, Quinn never attended art school; nonetheless, taking advantage of books, museums, and amassing a sizable collection, he managed to give himself an effective education in the language of modern art. By the early 1980s, his work had caught the eyes of various gallery owners and was exhibited internationally, in New York, Los Angeles, Paris, and Mexico City. His work is now represented in both public and private collections throughout the world.[citation needed]

He wrote two memoirs, The Original Sin (1972) and One Man Tango (1997), a number of scripts, and a series of unpublished stories currently in the collection of his archive.

By the 1990s, Quinn then had two children with his secretary, Katherine Benvin; daughter Antonia Patricia Rose Quinn (born July 23, 1993) and son Ryan Nicholas Quinn (born July 5, 1996).[15][19] His marriage with Addolori finally ended in divorce in August 1997. He then married Benvin in December 1997. Quinn and Benvin remained married until his death, in June 2001.

Quinn spent his last years in Bristol, Rhode Island. He died of respiratory failure, pneumonia and throat cancer on June 3, 2001 in Boston, Massachusetts at the age of 86.[3]

His funeral was held in the First Baptist Church in America in College Hill, Providence, Rhode Island. Late in life, he had rejoined the Foursquare evangelical Christian community. He is buried in a family plot in Bristol, Rhode Island.

In his birthplace Chihuahua, Mexico,[20] there is a statue of Quinn doing his famous "Zorba the Greek" dance. A 70-foot high mural, entitled "Anthony Quinn" or more commonly "The Pope of Broadway" (1984) by Eloy Torrez, is at 259 W. Third Street, Los Angeles, California.

On January 5, 1982, the Belvedere County Public Library in East Los Angeles was renamed in honor of Anthony Quinn. The present library sits on the site of his family's former home.[21]

There is an Anthony Quinn Bay and Beach in Rhodes, Greece, just 2.7 miles (4.3 km) south of the village of Faliraki (aka Falirakion or Falirákion).[22] The land was bought by Quinn during the filming of The Guns of Navarone in Rhodes; however, it was reclaimed by the Greek government in 1984 due to a change in property law.[23]

Since 2002,[24] the National Council of La Raza has given the Anthony Quinn Award for Excellence in Motion Pictures as an ALMA Award.[25]