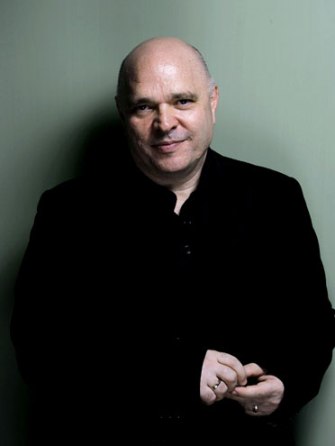 Anthony Minghella, CBE (6 January 1954 – 18 March 2008) was a British film director, playwright and screenwriter. He was chairman of the board of Governors at the British Film Institute between 2003 and 2007.

Minghella was born in Ryde, on the Isle of Wight, an island off the south coast of England that is a popular holiday resort. His family are well known on the Island, where they ran a café in Ryde until the 1980s and have run an eponymous business making and selling Italian-style ice cream since the 1950s.[1] His parents were Edoardo Minghella (an Italian immigrant) and Leeds-born Gloria Alberta (née Arcari).[2][3] His mother's ancestors originally came from Valvori, a small village in the Lazio region of central Italy.[4][5] He was one of five children, a sister being Loretta Minghella.

Minghella attended St. Mary's Catholic Primary School, Ryde, Sandown Grammar School, and St John's College, Portsmouth. Early interests suggested a possible career as a musician,[6] with Minghella playing keyboards with local bands Earthlight and Dancer.[7] The latter recorded an album Tales of the Riverbank in 1972 although it was not released until 2001.[8] He attended the University of Hull, studying Drama.[9] As an undergraduate he had arrived at university with an EMI contract for the band in which he sang and played keyboard; while there writing words and music for a musical entitled Mobius the Stripper.[10]

After several years of teaching at the same university (Samuel Beckett and medieval theatre), he abandoned his pursuit of a PhD to work for the BBC.[11]

His debut work was a stage adaptation of Gabriel Josipovici's Mobius the Stripper (1975) and it was his Whale Music (1985) brought him notice.[12] His double bill of Samuel Beckett's Play and Happy Days was his directorial debut and debut feature film as a director was A Little Like Drowning (1978). During the 1980s, he worked in television, starting as a runner on Magpie before moving into script editing the children's drama series Grange Hill for the BBC and later writing The Storyteller series for Jim Henson. He wrote several episodes of the ITV detective drama Inspector Morse and an episode of long-running ITV drama Boon. Made in Bangkok (1986) found mainstream success in the West End.

Radio success followed with a Giles Cooper Award for the radio drama Cigarettes and Chocolate[13] first broadcast on BBC Radio 4 in 1988. It was revived on 3 May 2008 as a tribute to its author director following his death. His production starred Juliet Stevenson, Bill Nighy and Jenny Howe. His first radio play Hang Up, starring Anton Lesser and Juliet Stevenson, was revived on 10 May 2008 as part of the BBC Radio 4 Minghella season.[14]

Truly, Madly, Deeply (1990), a feature drama written and directed for the BBC's Screen Two anthology strand, bypassed TV broadcast and instead had a cinema release. He bypassed an offer of another Inspector Morse directorial to do the project, the latter he believed would have been a much higher-profile assignment. The English Patient (1996) brought him two Academy Awards nominations, Best Director (which he won) and Adapted Screenplay. He also received an Adapted Screenplay nomination for The Talented Mr. Ripley (1999).

The No. 1 Ladies' Detective Agency, a pilot episode television adaptation which he co-wrote and directed, was broadcast posthumously on BBC One (23 March 2008); watched by 6.3 million viewers. He vocally supported I Know I'm Not Alone, a film of musician Michael Franti's peacemaking excursions into Iraq, Palestine and Israel. He directed a party election broadcast for the Labour Party in 2005. The short film depicted Tony Blair and Gordon Brown working together and was criticised for being insincere: "The Anthony Minghella party political broadcast last year was full of body language fibs", said Peter Collett, a psychologist at the University of Oxford. "When you are talking to me, I'll give you my full attention only if I think you are very high status or if I love you. On that party political broadcast, they are staring at each other like lovers. It is completely false."[15]

With Samuel Beckett's 100th birthday celebrations, he returned to radio on BBC Radio 3 with Eyes Down Looking (2006), with: Jude Law, Juliet Stevenson and David Threlfall.[16] An operatic directorial debut came with Puccini's Madama Butterfly. Premiered at the English National Opera (London, 2005), then at the Lithuanian National Opera and Ballet Theatre (Vilnius, March 2006) and at the Metropolitan Opera (New York City, September 2006). The latter was transmitted live into cinemas worldwide (7 March 2008) as part of the Met's HD series and is now available on DVD. The ENO work was to have led to other operatic projects, directing again at English National Opera and collaborating with Osvaldo Golijov on a new opera for the Met and ENO, writing the libretto and directing the production.[10]

He was honoured with the naming of The Anthony Minghella Theatre at the Quay Arts Centre (Isle of Wight). He made an appearance in the 2007 film Atonement as a television host interviewing the novelist central to the story.

His last work was the screenplay of the film adaptation of the Tony Award-winning musical Nine (1982); Arthur Kopit (book) and Maury Yeston (score). It is based on the film 8½. He shared credit with Michael Tolkin on the screenplay.

The Film, Theatre & Television department at the University of Reading, opened in 2012, was named in his honour.

Minghella met his first wife, Yvonne Miller, when they were students.[17] They had one daughter, Hannah,[18] who worked as a production assistant on The Talented Mr. Ripley, and was President of Sony Pictures Animation[19] for a time before being named President of Production of Columbia Pictures.[citation needed] Minghella and his first wife eventually divorced. In 1985, Minghella married Hong Kong-born choreographer and dancer Carolyn Jane Choa.[5] They had one son, Max, who is an actor.

Minghella's younger brother, Dominic Minghella, is the creator of the popular British television series Robin Hood and Doc Martin, and a scriptwriter. His sister Loretta is Director of Christian Aid,[20] his sister Edana participated in a jazz event on the Isle of Wight, and his nephew Dante is one of the participants in Channel 4's Child Genius series.

Minghella was a fan of Portsmouth F.C. and appeared in the Channel 4 documentary Hallowed Be Thy Game. His home had two double bedrooms dedicated to the display of Portsmouth memorabilia dating back to the club's founding in 1898.[21][22]

Minghella died of a haemorrhage on 18 March 2008 in Charing Cross Hospital, Hammersmith, following an operation the previous week to remove cancer of the tonsils and neck.[23][24]

A memorial plaque to Anthony Minghella was unveiled on 2 March 2016 by Jude Law, at Western Gardens, Ryde, Isle of Wight.[25]