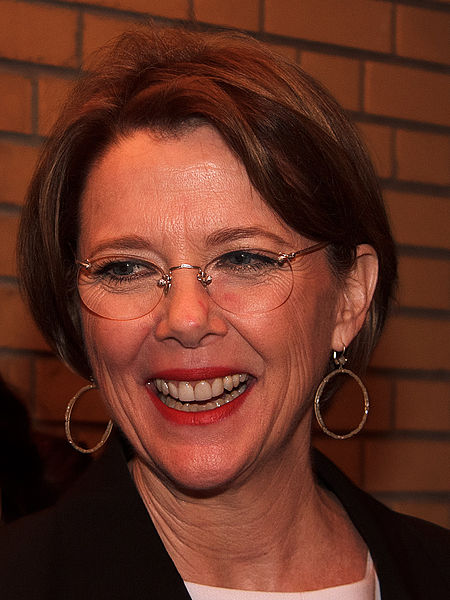 Annette Carol Bening[1] (born May 29, 1958)[2] is an American actress. She began her career on stage with the Colorado Shakespeare Festival company in 1980, and played Lady Macbeth in 1984 at the American Conservatory Theatre. She was nominated for the 1987 Tony Award for Best Featured Actress in a Play for her Broadway debut in Coastal Disturbances. She is a four-time Academy Award nominee for the films: The Grifters (1990), American Beauty (1999), Being Julia (2004), and The Kids Are All Right (2010). In 2006, she received a film star on the Hollywood Walk of Fame.

Bening won the BAFTA Award for Best Actress and the Screen Actors Guild Award for Performance by a Female Actor in a Leading Role for American Beauty, two Golden Globe Awards for Being Julia and The Kids Are All Right, and was nominated for a Primetime Emmy Award for Outstanding Lead Actress in a Miniseries or a Movie for Mrs. Harris.

Bening was born in Topeka, Kansas,[2] the daughter of Shirley Katherine (née Ashley; b. 1929)[3] and Arnett Grant Bening (b. 1926). Her mother was a church singer and soloist, and her father was a sales training consultant and insurance salesman.[4][5][6] Her parents, natives of Iowa, were practicing Episcopalians and conservative Republicans. She is of mostly German and English descent.[7][8]

She began acting in junior high school, playing the lead in The Sound of Music. She graduated in 1975 from Patrick Henry High School, where she studied drama. She then spent a year working as a cook on a charter boat taking fishing parties out on the Pacific Ocean, and scuba diving for recreation. Bening attended San Diego Mesa College, then completed an academic degree in theatre arts at San Francisco State University.

Bening began her career on stage with the Colorado Shakespeare Festival company in 1980,[9] and appeared in plays at the San Diego Repertory Theatre. She was a member of the acting company at the American Conservatory Theater in San Francisco while studying acting as part of the Advanced Theatre Training Program. There, she starred in such productions as Shakespeare's Macbeth as Lady Macbeth. Bening also starred in productions of Pygmalion and The Cherry Orchard at the Denver Center Theatre Company during the 1985-86 season. She made her Broadway debut in 1987, garnering a Tony Award nomination for Best Featured Actress in a Play for her performance in Coastal Disturbances.

Bening made her film debut in The Great Outdoors (1988) and co-starred with Colin Firth in Valmont (1989). She made her breakout role in The Grifters (1990), in which she was nominated for the Academy Award for Best Supporting Actress. In 1991, she portrayed Virginia Hill in Barry Levinson's biopic Bugsy, alongside Warren Beatty. Bening co-starred with Harrison Ford in Regarding Henry. In 1994, Bening and Beatty starred together again, in Love Affair. In 1995, Bening played the female lead in The American President, with Michael Douglas, a role she followed with Tim Burton's sci-fi spoof Mars Attacks! (1996), and The Siege (1998), a thriller with Denzel Washington and Bruce Willis. Bening starred in Sam Mendes' directorial debut film American Beauty (1999). The film won five Academy Awards, including for Best Picture. For her performance, she was nominated for an Academy Award for Best Actress and won the Screen Actors Guild Award for Outstanding Performance by a Female Actor in a Leading Role.[10] Bening starred in other films, including In Dreams (1999) and What Planet Are You From? (2000).

Bening at the 83rd Academy Awards

Bening played Sue Barlow in Open Range (2003). She played the title role in Being Julia (2004), in which she won a Golden Globe, NBR Best Actress, was a runner-up for NYFCC and was nominated by SAG and for the Academy Award for her performance.[11] She was nominated for a Primetime Emmy Award for her role of Jean Harris the 2005 HBO film Mrs. Harris.[12] She replaced Julianne Moore to star in the film adaptation of Running with Scissors (2006), for which she was nominated for a Golden Globe.[11] Bening starred in The Women (2008) remake. In 2009, Bening starred in a new interpretation of the Euripides classic Medea at UCLA's Freud Playhouse.[13] She received positive reviews for her performance in the independent film Mother and Child (2009).[14] In 2010, she starred in Joanna Murray-Smith's comedy The Female of the Species at the Geffen Playhouse in Los Angeles.[15] Later that year, Bening received strong critical acclaim for her performance in The Kids Are All Right, with several reviewers noting that she "deserves an Oscar" for her "sublime" performance.[16] For her role, Bening won a Golden Globe, NYFFC Best Actress, was runner-up for NSFC, and was nominated by SAG and BAFTA and for the Academy Award.[11]

In 2012, Bening's audiobook recording of Virginia Woolf's Mrs. Dalloway was released at Audible.com. In 2014, she starred in Shakespeare's King Lear at the Delacorte Theater in Central Park, as part of the Public Theatre's Free Shakespeare in the Park. It marked her first New York stage appearance in twenty years.[17][18] In 2016, Bening played Dorothea Fields in the comedy-drama 20th Century Women,[19] for which she was nominated for a Golden Globe and was a runner-up at NSFC as well.[11] She was also nominated by BAFTA for her role as Gloria Grahame in Film Stars Don't Die in Liverpool (2017).[11]

Bening married choreographer J. Steven White on May 26, 1984. They divorced in 1991. Bening married Warren Beatty on March 3, 1992. They have four children: 2 sons and 2 daughters. Bening is ordained as a minister by the Universal Life Church Monastery.[20]

Main article: List of awards and nominations received by Annette Bening
Report a problem
Write to Annette Bening at FanPal • 2021