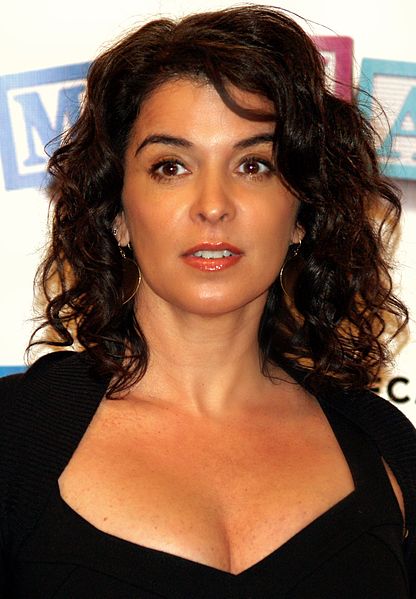 Sciorra was born in Brooklyn, New York,[1] to a fashion stylist mother and a veterinarian father.[2] Her father is Italian, and her mother is Cuban.[3] Sciorra studied dance as a child, and later took drama lessons at the Herbert Berghof Studio and the American Academy of Dramatic Arts.[4]
Read more...

Sciorra made her feature film debut with a starring role in the 1989 comedy, True Love. She was praised by critics, with Janet Maslin of The New York Times commenting: "Ms. Sciorra, with her gentle beauty and her hard-as-nails negotiating style, perfectly captures the mood of the film, and makes Donna fully and touchingly drawn".[5] The performance earned her a nomination for the Independent Spirit Award for Best Female Lead.[6]

She earned widespread attention in 1991 for her co-lead role in Spike Lee's film, Jungle Fever, opposite Wesley Snipes.[8] In his review for The Los Angeles Times, Kenneth Turan wrote that Sciorra was "possessed of considerable presence, assurance and vulnerability".[9] She then starred alongside Rebecca DeMornay in Curtis Hanson's 1992 thriller, The Hand That Rocks The Cradle, which held the #1 position at the North American box office for four consecutive weeks.[10]

Sciorra continued to work steadily throughout the 1990s. Film parts included The Night We Never Met, with Matthew Broderick; Romeo is Bleeding, with Gary Oldman; Mr. Wonderful, with Matt Dillon (all 1993); The Addiction, with Christopher Walken (1994); Cop Land, with Sylvester Stallone (1997); and What Dreams May Come (1998), in which she co-starred for a second time with Robin Williams.

In 2001, she received a nomination for the Primetime Emmy Award for Outstanding Guest Actress in a Drama Series for her portrayal of Gloria Trillo on the HBO series The Sopranos.[11] Entertainment Weekly called it "a career changing performance".[12]

In 2006, Sciorra co-starred with Vin Diesel in Find Me Guilty, directed by Sidney Lumet. The film, based on the true story of the longest Mafia trial in American history, was described as "gripping" by Stephen Holden of The New York Times, who also called Sciorra's performance "excellent".[13]

In 2018, she starred as Rosalie Carbone on the second season of Luke Cage. Of Sciorra's casting, executive producer Cheo Hodari Coker said: "I've been a huge fan of hers since Jungle Fever, and no joke as Rosalie Carbone. You haven't seen her this gangster since The Sopranos. I'm thrilled her introduction to the Marvel Universe will be on Marvel's Luke Cage".[14] Later that year, she reprised the role of Carbone on the third season of Daredevil.

In October 2017, Sciorra levied allegations of sexual assault against the film producer Harvey Weinstein.[17][18] In an article published by The New Yorker, Sciorra alleged Weinstein raped her after he forced his way into her apartment in the 1990s.[8]