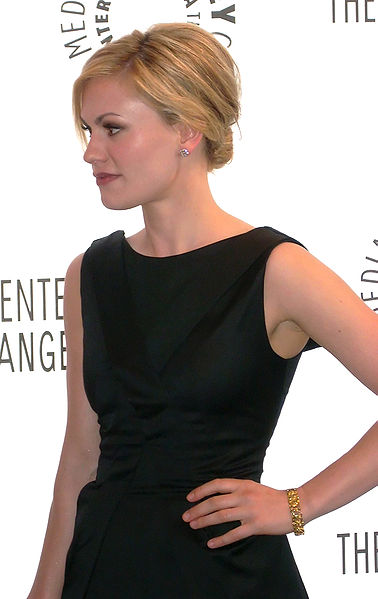 Anna Helene Paquin (/ˈpækwɪn/ PAK-win; born 24 July 1982) is a New Zealand-Canadian-American actress.[1][2][3][4] She was born in Manitoba and brought up in Wellington, New Zealand, before moving to Los Angeles during her youth. She completed a year at Columbia University before leaving to focus on her acting career. As a child, she played the role of Flora McGrath in Jane Campion's romantic drama film The Piano (1993), despite having had little acting experience. For her performance, she received the Academy Award for Best Supporting Actress at the age of 11, making her the second-youngest winner in Oscar history.[5][6]

Paquin was a successful child actress, receiving multiple Young Artist Award nominations for her roles in Fly Away Home (1996), The Member of the Wedding (1997), and A Walk on the Moon (1999), and was nominated for a Screen Actors Guild Award for Outstanding Performance by a Cast in a Motion Picture for appearing in Cameron Crowe's comedy-drama film Almost Famous (2000). She played mutant superheroine Rogue in multiple films of the X-Men franchise and was nominated for a Saturn Award for her performance in the first installment.

Paquin was born in Winnipeg, Manitoba, Canada, the daughter of Mary Paquin (née Brophy), an English teacher and native of Wellington, New Zealand, and Brian Paquin, a high school Physical Education teacher from Canada. Paquin has two older siblings: Andrew (born 1977), a director, and Katya (born 1980),[8][9] whose partner is the Green Party of New Zealand's former co-leader Russel Norman.[10] Paquin is of Dutch, French and Irish descent.[11] Paquin's family moved to New Zealand when she was four. Her musical childhood hobbies in New Zealand included playing the viola, cello and piano. She also participated in gymnastics, ballet, swimming and downhill skiing, though she did not have any hobbies related to acting.[12][13]

While in New Zealand, Paquin attended Raphael House Rudolf Steiner School in Lower Hutt until she was 9 years old,[14] then Hutt Intermediate School (1994-95). Having begun her secondary education in Wellington at Wellington Girls' College, she completed her high school diploma at Windward School in Los Angeles, after moving to the U.S. with her mother following her parents' divorce (1995).[15] She graduated from Windward School in June 2000 and completed the school's Community Service requirement by working in a soup kitchen and at a Special Education Centre. She studied at Columbia University for one year but has since been on a leave of absence to continue her acting career.

Director Jane Campion was looking for a little girl to play a main role in The Piano, set to film in New Zealand, and a newspaper advertisement was run announcing an open audition. Paquin's sister read the ad and went to try out with a friend; this inspired Paquin to audition. When Campion met Paquin—whose only acting experience had been as a skunk in a school play—she was very impressed with the nine-year-old's performance of the monologue about Flora's father, and she was chosen from among the 5000 candidates.[13]

When The Piano was released in 1993 it was lauded by critics, won prizes at a number of film festivals, and eventually became a popular film among a wide audience. Paquin's debut performance in the film earned her the 1993 Academy Award for Best Supporting Actress at the age of 11, making her the second-youngest Oscar winner in history, behind Tatum O'Neal.[13] The Piano was made as a small independent film and wasn't expected to be widely known, and Paquin and her family did not plan to continue to pursue acting.[12] However, she was invited to the William Morris Agency, and she kept receiving offers for new roles. She systematically rejected them, but she did appear in three commercials for the phone company MCI in 1994.[16] She later made a series of television commercials for Manitoba Telecom Systems in her birth city of Winnipeg.[17] She also appeared as a voice in an audio book entitled The Magnificent Nose in 1994.

In 1996, she appeared in two films. The first role was as young Jane in Jane Eyre. The other was a lead part in Fly Away Home playing a young girl who, after her mother dies, moves in with her father and finds solace in taking care of orphaned goslings.[18]

As a teenager, she had roles in films, including A Walk on the Moon, Amistad, Hurlyburly, She's All That and Almost Famous.

X-Men, True Blood and beyond

Between 2006 and 2007, she starred in, as well as executive-produced Blue State. The film is made by Paquin Films, a production company formed by her and her brother, Andrew Paquin.[19] In November 2006, she completed the film Margaret, which was released in 2011. She played Elaine Goodale in HBO's made-for-TV film Bury My Heart at Wounded Knee, based on Dee Brown's best-seller. In 2007, she played the role of Laurie in the horror film Trick 'r Treat, which was released in 2009.

Paquin was cast as waitress Sookie Stackhouse in the HBO series True Blood in 2008, her first role in a TV series. The show is based on The Southern Vampire Mysteries series of novels by Charlaine Harris, set in the fictional town of Bon Temps, Louisiana. While working on True Blood, she started dating co-star Stephen Moyer and later married him in 2010.

In 2010, Paquin's film The Romantics, a romantic comedy with Josh Duhamel and Katie Holmes, was released in the US at selected cinemas in September. She played a cameo role in Scream 4, alongside Kristen Bell in 2011.[21] She also played the voice of Kristin on an episode of Phineas and Ferb.

Paquin reprised her role as Rogue in the 2014 film X-Men: Days of Future Past, but most of her scenes were cut out for the theatrical release.[22][23] An alternative version of the film with all of Paquin's scenes reinstated was released as The Rogue Cut on 14 July 2015.[24] Paquin voiced Ramsey in Disney•Pixar's film The Good Dinosaur.[25] She also played Nancy Holt, the wife of a Confederate soldier, in the 2016 miniseries Roots.[26]

In June 2016, the Human Rights Campaign released a video in tribute to the victims of the 2016 Orlando gay nightclub shooting; in the video, Paquin and others told the stories of the people killed there.[27][28]

Paquin starred in the Canadian crime drama Bellevue which airs on CBC Television and can next be seen in husband Stephen Moyer's directorial debut, The Parting Glass.[29]

On 1 April 2010, Paquin came out as bisexual in a public service announcement for the Give a Damn campaign as part of the True Colours Fund, an advocacy group organized by Cyndi Lauper dedicated to LGBT equality.[38] The True Colours Fund was created to "inspire and engage everyone, especially straight people, to become active participants in the advancement of gay, lesbian, bisexual and transgender equality".[39] The video features Anna Paquin stating, "I'm Anna Paquin. I'm bisexual, and I give a damn."[40] When asked about her participation in the video, Paquin responded by saying, "It wasn't like it was a big secret, it was just a cause I cared about and privately supported, but not one that I had ever had an opportunity to speak out about in a way that would be useful. Obviously I know that one person's voice doesn't necessarily do that much, but I just wanted to do my bit."[41] In May 2012, in an Us Weekly interview Paquin rejected the notion that bisexuality is a choice. "My sexuality is not made up, for a bisexual, it's not about gender. That's not the deciding factor to who they're attracted to," stated Paquin.[42]

Paquin also supports other charities and foundations such as the Children's Hospital Los Angeles, Make-A-Wish Foundation, Elton John AIDS Foundation, and The Art of Elysium.[43]