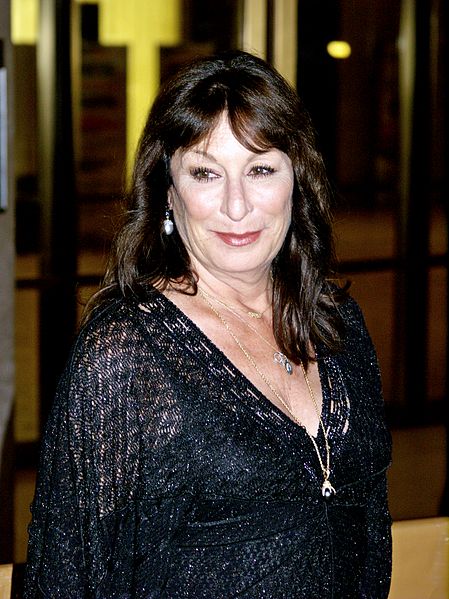 Anjelica Huston (/ˈhjuːstən/; born July 8, 1951) is an American actress, director, producer, author, and former fashion model. Huston became the third generation of her family to receive an Academy Award, when she won Best Supporting Actress for her performance in 1985's Prizzi's Honor, joining her father, director John Huston, and grandfather, actor Walter Huston. She received further Academy Award nominations for her performances in Enemies: A Love Story (1989) and The Grifters (1990), for Best Supporting Actress and Best Actress, respectively.

Huston made her directorial debut with the 1996 film Bastard out of Carolina. This was followed by Agnes Browne (1999), in which she also starred. She has written two memoirs: A Story Lately Told and Watch Me.

Huston was born in Santa Monica, California, and is the daughter of director and actor John Huston and prima ballerina and model Enrica Soma.[1] Huston's paternal grandfather was Canadian-born actor Walter Huston. Huston has Scottish, Scotch-Irish, English and Welsh ancestry from her father, and Italian from her mother. Her father was also an Irish citizen.[2] She spent much of her childhood in Ireland which she still considers home,[3] particularly near Craughwell, County Galway, and attended school at Kylemore Abbey.[4] Huston has an older brother, Tony, a younger maternal half-sister named Allegra, whom she called "Legs", a younger paternal half-brother, actor Danny Huston, and an adopted older brother, Pablo. She is the aunt of Boardwalk Empire actor Jack Huston.[5] She later lived in England, where she attended Holland Park School.[6]

In the late 1960s, she began taking a few small roles in her father's movies. She began other small roles too, substituting, for example, her hands for Deborah Kerr's in the British Casino Royale and advanced to bigger roles in 1969, starring in A Walk with Love and Death, where she played the 16-year-old French noblewoman Claudia opposite Assi Dayan. In the same year, her mother, who was 39 years old, died in a car accident, and she relocated to the United States, where she modeled for several years. While modeling, she worked with photographers such as Richard Avedon and Bob Richardson.[7] In the early 1970s, Huston, with Pat Cleveland, Pat Ast, Karen Bjornson, Alva Chinn, and others, became one of fashion designer Halston's favored troupe of models, nicknamed the Halstonettes.[8]

Huston with her half-brother Danny Huston on the red carpet at the 62nd Annual Academy Awards, March 26, 1990

Huston studied acting in the early 1980s after deciding to focus more on films. Her first notable role was in Bob Rafelson's remake of The Postman Always Rings Twice (1981). Later, her father cast her as Maerose, daughter of a Mafia don whose love is scorned by a hit man (Jack Nicholson) in the film adaptation of Richard Condon's Mafia-satire novel Prizzi's Honor (1985). Huston won the Best Supporting Actress Oscar for her performance, making her the first person in Academy Award history to win an Oscar when a parent and a grandparent had also won one. She also earned a Best Actress Oscar nomination for her portrayal of a con artist in Stephen Frears' The Grifters (1990). She starred as the lead in her father's final directorial film, The Dead (1987), an adaptation of a James Joyce story.

She was then cast as Morticia Addams in the hugely successful 1991 movie adaptation of The Addams Family. In 1993, she reprised the role for the sequel Addams Family Values. She also starred in the 1998 Hollywood blockbuster Ever After: A Cinderella Story alongside Drew Barrymore and Melanie Lynskey as the Baroness Rodmilla De Ghent. She starred in two Wes Anderson films, The Royal Tenenbaums (2001) and The Life Aquatic with Steve Zissou (2004), as well as appearing in a minor role in 2007's The Darjeeling Limited. She voiced the role of Queen Clarion in the Disney Fairies film series starring Tinker Bell. Huston received a star on the Hollywood Walk of Fame on January 22, 2010. In 2011, Huston was in the film Horrid Henry: The Movie. Huston later appeared on the NBC television series Smash as Broadway producer Eileen Rand.[9] In 2015 and 2016 Huston appeared in the second and third seasons of the Amazon Video series Transparent.

Huston has followed in her father's footsteps in the director's chair. Her first directorial credit was Bastard Out of Carolina (1996), followed by Agnes Browne (1999), in which she both directed and starred, and then Riding the Bus with My Sister (2005). For over 20 years, Huston has been developing a film project on Maud Gonne and William Butler Yeats.[10] During a visit to the National Library of Ireland in 2010 to look through the Yeats collection, Huston said that she was still developing the project.[11]

Huston led a letter campaign organized by the U.S. Campaign for Burma and Human Rights Action Center in November 2007. The letter, signed by over twenty five high-profile individuals from the entertainment business, was addressed to the United Nations Secretary General Ban Ki-moon and urged him to "personally intervene" to secure the release of Nobel Peace Prize recipient Aung San Suu Kyi of Burma.[12]

In December 2012, Huston recorded a public service announcement for PETA urging her colleagues in Hollywood to refrain from using great apes in television, movies and advertisements.[13] The animal rights organization subsequently named her their Person of the Year 2012.[14] In 2018, she donated her fur coats to the homeless and animal shelters.[15]

In her 2014 book A Story Lately Told, Huston refers to a sexual relationship with actor James Fox when she was a teenager. In 1969, at age 18, Huston began dating photographer Bob Richardson, who was 23 years her senior. Their relationship lasted almost four years.[16] She met Jack Nicholson in 1973 and they lived together, on and off,[17] from that year until 1990, when the media reported he had fathered a child with Rebecca Broussard.[16] On May 23, 1992, Huston married sculptor Robert Graham. The couple lived in a three-story[18] house, designed by Graham, at 69 Windward Avenue in Venice, California, until his death on December 27, 2008. She does not have any children.

Huston wrote her memoirs as one 900-page book; she split it into two books at her publisher's urging.[19] She was a close friend of actor Gregory Peck, whom her father directed in Moby Dick (1956). The two first met on the set of the film when she was four years old while Peck was in costume as Captain Ahab. Decades later, after her father's death, Huston reunited with Peck and maintained a friendship that lasted until his death.[20][21]

Huston's home went on the market for $18 million in 2010, but initially failed to sell. In September 2012, the New York Post reported that Huston was planning to transform her house into a private social club;[22] the actress was said to have accepted $12 million for the property and to serve on the advisory board for a new private club to be based there.[23] In April 2014, Huston sold the house for $11.15 million.[24]