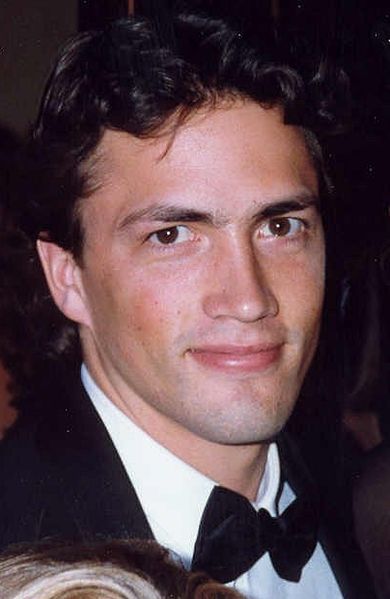 Andrew Eppley Shue (born February 20, 1967) is an American actor, known for his role as Billy Campbell on the television series Melrose Place (1992-1999). He is on the Board of Directors for Do Something (which he co-founded)[2] and is the co-founder of the social networking website CafeMom.[3]

Shue was born in Wilmington, Delaware. His mother, Anne Brewster (née Wells; b. 1938), is a bank executive who was the vice president of the private division of the Chemical Bank Corporation. His father, James W. Shue (b. 1936-d. May 24, 2013), was a lawyer and real estate developer who was the president of the International Food and Beverage Corporation and was active in Republican politics, having once unsuccessfully run for the U.S. Congress in New Jersey.[4][5][6] His mother was a descendant of Pilgrim leader William Brewster and his father was of German ancestry, from Pennsylvania.[7][8] His sister, Elisabeth, is also an actor.

Shue attended Columbia High School in Maplewood, New Jersey. Along with his sister, Elisabeth Shue, he was inducted into the CHS Hall of fame in 1994.[9] At Dartmouth College, as he was in high school, Shue was a Regional All America soccer player and spent a winter studying and playing soccer in Glasgow, Scotland for Queen's Park FC. Shue received his B.A. in history from Dartmouth in 1989. After graduating, he visited Zimbabwe, where he simultaneously played soccer and taught high school math at Founders High School.

In May 1992, Shue was cast to play the role of Billy Campbell on the Aaron Spelling soap opera Melrose Place. He starred opposite Courtney Thorne-Smith, whom he later dated. Shue stayed on the show for six years. During this time he appeared as an abusive husband in the Francis Ford Coppola film The Rainmaker, starring Matt Damon and Claire Danes.

He worked on the 2007 feature film, Gracie, with his sister Elisabeth, his brother John, and his brother-in-law, Davis Guggenheim, the Oscar-winning director of An Inconvenient Truth. Shue co-produced the film and also appeared in a minor role. It pays tribute to the Shue siblings' elder brother Will, who died in an accident in 1988. The story is loosely based on Elisabeth's childhood, when she was the only girl playing on an all-boys soccer team.

During his time in Zimbabwe, Shue played for the Bulawayo Highlanders. That season, the Highlanders won "the double", which is both Zimbabwe Premier Soccer League and CBZ Cup titles. At the time, Shue was the only white player in the Zimbabwe Premier Soccer League.[15] In September 1993, he played one game with Los Angeles United of the Continental Indoor Soccer League. In July 1994, he played two games for the Anaheim Splash.[16] In 1996, while still on Melrose Place, Shue played for the Los Angeles Galaxy of Major League Soccer, recording one assist in five games.[17] He spent the entire 1997 season on injured reserve.

Along with his childhood best friend Michael Sanchez, Andrew co-founded Do Something. He now sits on the Board of Directors.

In 2006 Shue and Sanchez co-founded the social networking website CafeMom.[18] Lead investors are Highland Capital Partners and Draper Fisher Jurvetson. The site used to provide an online community for moms to connect and share advice and ideas. CafeMom's community forums were shut down at 5:00 pm est on May 24, 2018. The company cited high advertising costs as the reason for the shutdown.

The CafeMom is now a family of companies, including blog The Stir,[19] Baby Name Wizard and popular Latina site MamasLatinas.