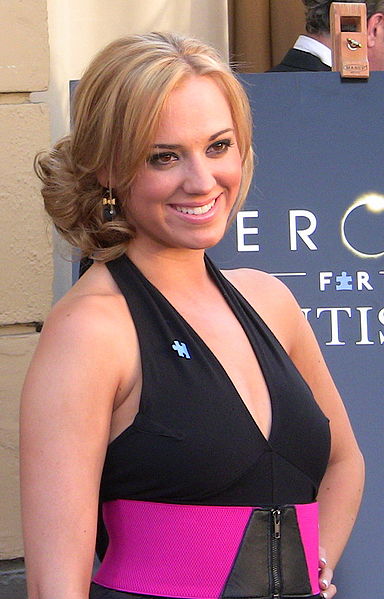 Andrea Lauren Bowen (born March 4, 1990) is an American actress and singer. She began her career appearing on Broadway musicals, include Les Misérables and The Sound of Music. In 2004, she began playing the role of Julie Mayer on the ABC comedy-drama series Desperate Housewives, a role she played on regular basis to 2008. She later appear on recurring basis to series finale in 2012. Bowen later went on to star in a number of Lifetime television movies.

Bowen was born in Columbus, Ohio. She is of Welsh descent.[citation needed] Bowen is the younger sister of Graham Bowen, Alex Bowen, Cameron Bowen, Jessica Bowen, and Jillian Bowen, who are also actors.[1] She briefly attended the Professional Performing Arts School in New York alongside best friend Sarah Hyland.

She made her Broadway debut in 1996 as Young Cosette/Young Eponine in Les Misérables. At six, she was the youngest actress ever to play the role.[2] From 1996 to 2001 Bowen was a consistent presence on Broadway. She appeared in the original company of the 1998 revival of The Sound of Music as Marta, and in 2000, created the role of Adele in the musical version of Jane Eyre. Bowen was also a member of The Broadway Kids concert group. Several of Bowen's siblings have also been heavily involved in musical theatre, performing roles in various other Broadway shows.[1]

Bowen has also had recurring or guest starring roles on such shows as One Tree Hill (with friend Sophia Bush), Boston Public and Law & Order: Special Victims Unit.

From 2004 to 2012, Bowen portrayed Julie Mayer on Desperate Housewives.[1] Prior to being cast in the role, Bowen did not think she would get it, explaining, "they were looking for a 12-year-old brunette ... and I was a 13-year-old blonde."[3] As a result, Bowen was asked to dye her hair for the role.[3] Bowen was initially attracted to the series because of the amount of attention paid to the younger characters. She stated, "If you watch a lot of other television shows, the kids don't have that much part in it. On this show, the writers give us each our own individual storylines that have a lot of layers to them."[3] For the show's third season, the character's storylines began revolving around themes of teenage rebellion and angst. Bowen commented: "She’s going to have, you know, primarily one love interest, and he’s a bit of a bad boy. We’re going to see if she has a positive effect on him, or if he has a negative effect on her. I’m definitely very excited about it ... because you kind of get to see a different side to her."[4]

In the 2006 film Red Riding Hood she appears as one of "The Three Ashleys." Also that year, she played the role of Candace in the esoteric adventure film Eye of the Dolphin. She also starred in the Lifetime Original film Girl, Positive, an experience that allowed her to help spread the message among youth that "HIV is something you can protect yourself from." [5]

Her character was written off the series for the fifth season. Hatcher expressed disappointment in the decision, but series creator Marc Cherry promised that Bowen would return to the series.[6] Bowen returned to the series for one episode during season five and rejoined the main cast as a series regular for the sixth season.[7] She appeared once in the seventh season and returned for a string of episodes in the show's eighth and final season.[8]

After leaving Desperate Housewives, Bowen guest starred on The Closer, Ghost Whisperer, Hawaii Five-0, and Scandal. She found a works playing a leading roles in a number of television movies for Lifetime and Hallmark. Her films include After the Fall (2010), The Preacher's Daughter (2013), Zoe Gone (2014), Under Fire (2016), Pretty Little Addict (2016) and A Family for the Holidays (2017). In 2013, she went to star in a teen comedy film G.B.F..[9]

Bowen has 3 wins and 4 nominations

Report a problem
Write to Andrea Bowen at FanPal • 2021