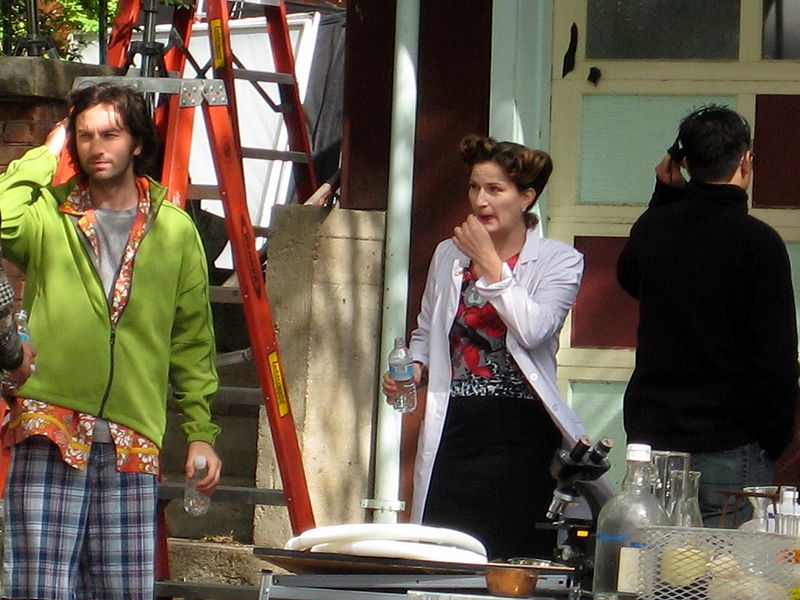 Ana Kristina Gasteyer (born May 4, 1967) is an American actress best known for her time as a cast member on Saturday Night Live from 1996 to 2002. She has since starred in such sitcoms as ABC's Suburgatory, Netflix's Lady Dynamite, and TBS's People of Earth.

Gasteyer was born in Washington, D.C.,[3] the daughter of Mariana Roumell-Gasteyer, an artist, and Phil Gasteyer, a lobbyist who became the mayor of Corrales, New Mexico.[4][5] Her maternal grandparents were Romanian and Greek.[5] She graduated from Sidwell Friends School and Northwestern University School of Communication (1989).[6] While a teenager, she was a pundit on an uncommercial segment ("What is a friend?" Her answer: "Someone you can be weird with.") of the short-lived PBS show Powerhouse.[citation needed] During her first year, she lived on the fourth floor of Willard Residential College on campus and majored in Voice. She later became a Theater major.[citation needed]
Read more...

Gasteyer developed comedy experience with the Los Angeles improv - sketch comedy group The Groundlings. She played small roles on Seinfeld (as a doomed customer of The Soup Nazi), as well as on the shows Party of Five, Frasier, Hope & Gloria and NYPD Blue. In 1996, Gasteyer joined the cast of Saturday Night Live. Among her most popular characters were high school music teacher Bobbie Mohan-Culp, National Public Radio Delicious Dish host Margaret Jo McCullen, Lilith Fair feminist singer Cinder Calhoun, and her impressions of Martha Stewart and Celine Dion. In 2000, she and Chris Parnell auditioned to succeed Colin Quinn as co-anchors of the news parody segment Weekend Update, but the positions ultimately went to Tina Fey and Jimmy Fallon.[7]

After six seasons, Gasteyer left SNL in 2002. Subsequently, she appeared in various television programs, films and stage productions. In 2004, Gasteyer played the mother of the main character Cady Heron (Lindsay Lohan) in the feature film Mean Girls, written by SNL castmate Tina Fey. The film also featured other former SNL castmates, including Fey, Tim Meadows, and Amy Poehler. She also appeared in the 2005 Showtime movie musical Reefer Madness as Mae, the doomed girlfriend of Jack and owner of the Reefer Den.

On June 24, 2005, Gasteyer originated the role of Elphaba in the Chicago sit-down production of the musical Wicked. The production opened July 13, 2005. Gasteyer was nominated for a Jefferson Award for her performance.[10] She played her final performance on January 22, 2006, replaced by her standby Kristy Cates. She later reprised the role in the Broadway production from October 10, 2006, through January 7, 2007.[11]

On April 12, 2007, the media announced that Gasteyer had joined the cast of the then new musical, Writing Arthur, for the 2007 New Works Festival for TheatreWorks in California, which ran from April 14 to April 22. Gasteyer performed in Chicago in the Stephen Sondheim musical Passion at Chicago Shakespeare Theater from October 2, 2007 to November 11, 2007.[12]

She was originally cast as Gloria in the Encores! Summer Series production of Damn Yankees, but due to injury during rehearsals, she was replaced by Megan Lawrence.[13] Gasteyer took part in the reading of the Broadway musical version of The First Wives Club.[14]

She starred as Kitty Dean in the Broadway play, The Royal Family which began performances at the Samuel J. Friedman Theatre on September 15, 2009 and officially opened on October 8, 2009.[15] The show concluded its run on December 13, 2009.[16] Gasteyer also starred as Frisco Kate Fothergill in the City Centers Encores! production of Girl Crazy, running from November 19 to November 22, 2009.[17]

Gasteyer appeared in season eight of Curb Your Enthusiasm as Larry David's girlfriend.

From 2011 to 2014, Gasteyer co-starred as Sheila Shay on the ABC comedy series Suburgatory, and as of March 2013, she was a spokeswoman for the Weight Watchers diet plan.

In 2014, taking advantage of her training as a singer, Gasteyer recorded and released I'm Hip, an album of jazz standards. "One Mint Julep" was one of the selections it included.

From 2016-2017, Gasteyer had a starring role on TBS's cult hit People of Earth, as the leader of an alien abductee support group.

Gasteyer and her husband, Charlie McKittrick, have two children, a daughter, Frances, born in June 2002, and a son, Ulysses, born in March 2008.