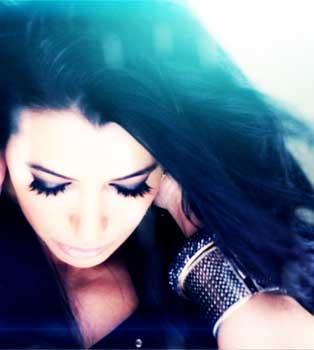 Amy Marie Weber (born July 2, 1970) is an American actress, model, film producer,[1] singer, former professional wrestling valet and professional wrestler. She is best known for her time in WWE as a WWE Diva. She released an album, Let it Rain, the titular single for which stayed in the U.S. Billboard Chart for over a month.[3] It was also released internationally via Dauman Music and Republic Digital and climbed to number 6 in the UK Singles Chart.[3] Weber has been the face of a Shiseido cosmetic campaign.[1]

Weber has played roles in numerous television series including CSI: Las Vegas, Son of the Beach,[1] Andy Richter Controls the Universe, Saved by the Bell, Melrose Place, Pacific Blue, The Young and the Restless, Baywatch, Jenny, USA High and City Guys. She also appeared in country musician Toby Keith's video for his song "Whiskey Girl" as the Whiskey girl, and, on December 31, 2004, she was featured in a sketch on the New Year's Eve live episode of The Tonight Show with Jay Leno. Correspondent Tom Green traveled all over New York City looking for someone to kiss him at midnight, which Weber eventually agreed to do.[4]
Read more...

Weber has had lead roles in the movies Scarlet Mirror, The Bet, Dr. Life, Art House, Kolobos, The Contract, Starforce, Crackerjack III, Becoming Pony Boi, The Pumpkin Karver, and Transmorphers. She also had a lead role in the movie Diablita,[1] and supporting roles in the movies The Adventures of Joe Dirt and Unbeatable Harold. She is also the executive producer and star of Crossroad. She was an associate producer on the film The Pumpkin Karver,[1] in which she starred.[5][unreliable source?]

A former WWE Diva Search contestant, Weber became a villainous diva for WWE's SmackDown! brand, with a gimmick as John "Bradshaw" Layfield's image consultant in The Cabinet.[6] During her time in The Cabinet, she feuded with Joy Giovanni, who she defeated by forfeit in her only match. She resigned from WWE in February 2005 because of her allegations of harassment from some of the wrestlers.[6] She later stated that she "wasn't happy with the pay" and the "frat house-like" environment.[1] To explain her departure, JBL stated she had been "fired" for accidentally firing a sleeping dart at him the previous week while he was playing with an inflatable dinosaur. The dart was actually intended for JBL's No Way Out 2005 opponent, Big Show.[7]

Weber has had starring roles in theater productions of Reservations for Two, 110 in the Shade, Apocalyptic Butterflies, Who's Afraid of Virginia Woolf?, and Grease.