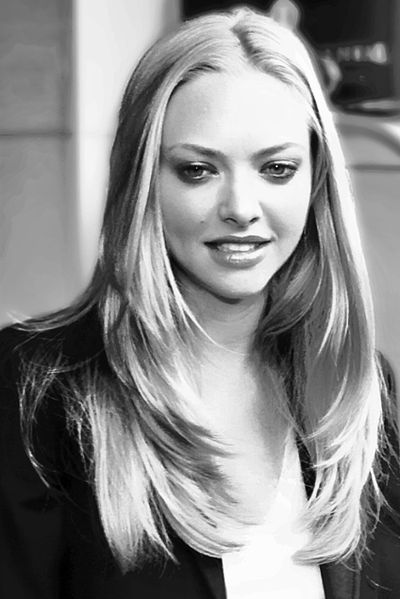 Amanda Michelle Seyfried (/ˈsaɪfrɛd/ SY-fred;[1] born December 3, 1985) is an American actress, model, and singer-songwriter.[2] She began her career as a model when she was 11 and her acting career at 15 with recurring parts on the soap operas As the World Turns and All My Children.

In 2004, Seyfried made her film debut in the teen comedy Mean Girls. Her subsequent supporting roles were in independent films, such as the drama Nine Lives (2005) and the crime drama Alpha Dog (2006). She also had a recurring role on the UPN television series Veronica Mars (2004-06). Between 2006 and 2011, Seyfried starred on the HBO drama series Big Love. She also starred in the musical feature film Mamma Mia! (2008) and reprised her role in the sequel, Mamma Mia! Here We Go Again (2018).

Seyfried was born in Allentown, Pennsylvania, on December 3, 1985.[3][4] Her mother, Ann (née Sander), is an occupational therapist, and her father, Jack Seyfried, is a pharmacist.[4][5] She is of mostly German descent, with smaller amounts of English, Scots-Irish, and Welsh ancestry.[6] Seyfried graduated from Allentown's William Allen High School in 2003.[7]

She has an older sister, Jennifer Seyfried, a musician in the Philadelphia organ-driven rock band Love City.[4] Seyfried enrolled at Fordham University in the fall of 2003, but did not attend after being offered her role in Mean Girls.[8]

During Seyfried's time modeling, she appeared in the printed ads for clothing companies including Limited Too with Leighton Meester, and was featured on three covers of the Sweet Valley High novel series.[4][9] She stopped modeling when she was 17,[4] and worked as a waitress in a retirement community.[10] Seyfried took voice lessons, studied opera, and trained with a Broadway coach while still a teen. She began acting as an extra in the daytime drama television series Guiding Light.[11] From 2000 to 2001, she portrayed the recurring character Lucy Montgomery on the CBS soap opera As the World Turns.[11] She played Joni Stafford on the ABC soap All My Children from 2002 to 2003.

In 2003, Seyfried auditioned to play the role of Regina George in Mean Girls; the role eventually went to Rachel McAdams. While she was initially considered to play the lead role of Cady Heron, played by Lindsay Lohan, the producers of the film decided that Seyfried should play Karen Smith, Regina's dim-witted "Plastic" friend and sidekick.[11] The film was a box office success, earning over US$129 million in its theatrical run.[12] Seyfried's performance in the film earned her, along with Lohan, Lacey Chabert, and McAdams, an MTV Movie Award in the category of "Best On-Screen Team". Seyfried auditioned to play the title character on UPN's television series Veronica Mars.[11] The role eventually went to Kristen Bell, and Seyfried portrayed Veronica's murdered best friend Lilly Kane.[11] Her character was only shown in flashbacks.[11] The show's creator, Rob Thomas, felt that Seyfried's portrayal as Lilly Kane was so outstanding that he used her more times in the show than he initially planned in the first season.[citation needed] Seyfried appeared in 10 episodes from 2004 to 2005.

In 2005, Seyfried played the lead character, Samantha, a role written by director Rodrigo García specifically for her, in one of the nine parts of the film Nine Lives, composed of nine short films with different themes and an ensemble cast.[13] For her performance, Seyfried, along with the film's other female leads, won an award from the Locarno International Film Festival, for Best Actress. The same year she played supporting character, Mouse, in the independent film American Gun. In 2006 Seyfried appeared in five episodes of Wildfire as Rebecca and had a lead role as Chrissy in the short film Gypsies, Tramps & Thieves, by writer-director Andrea Janakas. Seyfried also contributed a minor role as Julie Beckley in Alpha Dog. From 2004 to 2006 Seyfried made multiple guest appearances on television series, including House, Justice, Law & Order: Special Victims Unit, American Dad! and CSI: Crime Scene Investigation.[11]

Seyfried's profile gained prominence due to her role in the highly acclaimed HBO drama television series Big Love. The series centers on a fictional fundamentalist Mormon family, in which Seyfried plays Sarah Henrickson, Bill and Barb's first daughter, who struggles with her family's polygamous faith.[14] Big Love premiered in the United States on March 12, 2006. In December 2009, HBO confirmed that Seyfried would return for the show's fourth season, but that it would be her last, as Seyfried wished to concentrate on her film career and upcoming projects.[15]

Following Big Love Seyfried had a supporting role, as Zoe, in the 2008 horror drama film Solstice, and co-starred alongside Meryl Streep in Mamma Mia!, a romantic comedy film adaptation of the 1999 musical of the same name. Mamma Mia! was Seyfried's first leading role. The film was the fifth highest-grossing film of 2008,[16] and as of January 2013 was the 73rd highest-grossing film of all time.[17] Her musical performance in Mamma Mia! was released on the film's soundtrack, for which she recorded five songs.[18] As part of promotion for both the film and its soundtrack, Seyfried recorded a music video of the song "Gimme! Gimme! Gimme! (A Man After Midnight)".

In March 2008 Seyfried was cast in the comedy horror film Jennifer's Body as Anita "Needy" Lesnicki, the title character's best friend.[19] The film, which premiered at the 2009 Toronto International Film Festival and was released to theaters on September 18, 2009,[20] received mixed reviews from critics.[21] The same year she was cast in the comedy-drama independent film Boogie Woogie. She played Paige Oppenheimer, one of the lead roles in the ensemble movie. The movie was originally shown on June 26, 2009, at Edinburgh International Film Festival, and was shown in US theaters April 25, 2010. On February 22, 2009, Seyfried presented an award and performed at the 81st Academy Awards ceremony. In early March 2009 director Zack Snyder had tapped Seyfried to portray the lead role, Baby Doll, in Sucker Punch,[22] but Seyfried had to drop out of the film due to scheduling conflicts with Big Love.[4][23]

Seyfried starred alongside Channing Tatum in Dear John, the film adaptation of the novel of the same name that was written by Nicholas Sparks.[24] The film was released on February 5, 2010, and received generally negative reviews.[24] Seyfried wrote and recorded "Little House", a song on one of the soundtracks of Dear John.[25] Kirk Honeycutt of The Hollywood Reporter said, "Seyfried gives the character and her relationship all she's got, but she can't do all the heavy lifting. The romance is too one-sided, and frankly, you can't blame her for steering her life into another channel."[26] Despite the mixed reviews, Dear John became the first film to break up Avatar's box office reign at number one at the United States box office and grossed US$80 million in the US theatrically and US$115 million worldwide.[27][28]

Later in 2010, Seyfried starred in the romantic-comedy film Letters to Juliet, based on the book by Lise and Ceil Friedman, which was released to mixed reviews and was a box office success, generating US$80 million worldwide. She was named, and received an award as, the "Showest Breakthrough Female Star of The Year".[33] She also won the "Scared-As-S**T" category for her performance in Jennifer's Body and was nominated for Best Female Performance for her movie Dear John, at the 2010 MTV Movie Awards.[34][35] Also in 2010, she was included in Forbes's "The 17 Stars To Watch" list,[36][37] and received three nominations in the Teen Choice Awards, including for Choice Movie Actress Drama and Choice Movie Chemistry with her co-star Channing Tatum for their film Dear John. Seyfried was also nominated for Choice Movie Actress Romantic Comedy for Letters to Juliet.[38]

In late January 2009, she became attached to appear in Myriad Pictures' adaptation of Oscar Wilde's comedy A Woman of No Importance.[39] The film was set to be released in 2011.[39][40] In 2010, however, reports indicated that the film might not be produced due to lack of financing.[41] In 2009, she was scheduled to appear in the movie Albert Nobbs; she ultimately dropped out due to scheduling conflicts and was replaced by Mia Wasikowska.[42] Seyfried played the starring role of Valerie in Catherine Hardwicke's Red Riding Hood; it was released on March 11, 2011, to mostly negative reviews, but earned US$90 million worldwide on a US$42 million budget. She also played the lead role of Sylvia Weis in Andrew Niccol's In Time, released in October 2011 to mixed reviews but grossed more than US$172 million worldwide. Also in 2011, Seyfried became a spokesperson and model for Cle de Peau Beaute, a Japanese line of beauty products.[43]

Seyfried starred in the thriller Gone, released in early 2012. Later that year, she played Cosette in the film adaptation of the musical Les Misérables. The film, and her performance, received acclaim from critics, and was nominated for an Academy Award for Best Picture and earned a total of US$440 million worldwide.[44][45][46]

In 2013, Seyfried appeared in the comedy The Big Wedding, had a voice role in the successful animated movie Epic and played Linda Lovelace in the biopic Lovelace. Her performance in the latter film earned Seyfried critical acclaim from film critics.[47] She appeared in the 2013 drama The End of Love. She was also signed to play the role of Ann Burden in the dramatization of the Robert O'Brien post-apocalyptic novel Z for Zachariah,[48] but was replaced by Margot Robbie after production was pushed back.[49] In 2013, she began modeling for Givenchy.[50]

In 2015, she starred in the comedy Ted 2, alongside Mark Wahlberg and Seth MacFarlane, and played Peter Pan's mother in the film Pan.[51]

In 2018, she starred as Anon, a futuristic visual hacker, in the Netflix original film Anon, with Clive Owen;[52] and reprised her role as Sophie Sheridan in the Mamma Mia! sequel, Mamma Mia! Here We Go Again, which was released in July.[53]

Seyfried has stated that she has anxiety and panic attacks. She also has stage fright and avoided performing in theater productions until April 2015.[54]

Seyfried at the premiere of Chloe at the Roy Thomson Hall on September 13, 2009