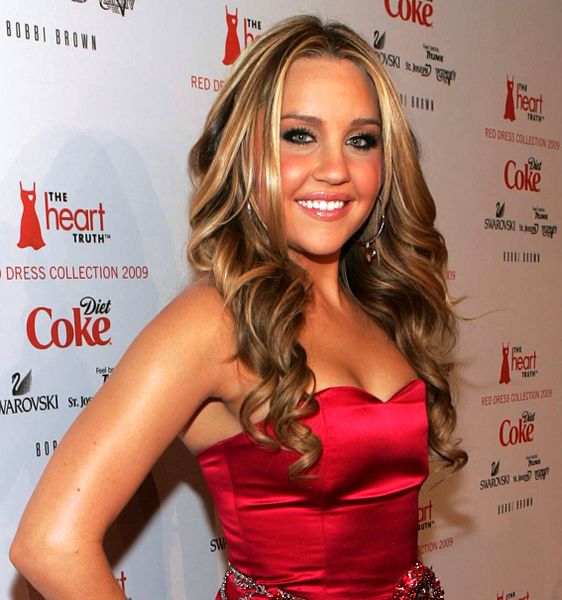 Amanda Laura Bynes (born April 3, 1986)[2] is an American actress, comedian and fashion designer.[3][4] After appearing in commercials and in plays, Bynes rose to prominence as a child star in the late 1990s and early 2000s on the Nickelodeon series All That and The Amanda Show. From 2002 to 2006, she starred in the sitcom What I Like About You on The WB. She has also starred in several films, including What a Girl Wants (2003), She's the Man (2006), Hairspray (2007), Sydney White (2007), and Easy A (2010).[5] Bynes announced an indefinite hiatus from acting in 2010 as she struggled with personal problems. Seven years later she announced her intention to return to television acting having sorted out her difficulties.[6]

Bynes was born in Thousand Oaks, California, the youngest of three children of Lynn Bynes (née Organ), a dental assistant and office manager, and Rick Bynes, a dentist.[7] Her father is Catholic, and is of Irish, Lithuanian, and Polish descent.[8] Her mother is Jewish (from a family from Romania, Russia, and Poland). Bynes' maternal grandparents are Canadians from Toronto, Ontario.[9][10]
Read more...

Bynes attended a comedy camp, and began professionally acting at the age of 7, appearing in a television advertisement for Buncha Crunch candies.[11] During her childhood, she also appeared on stage in versions of Annie, The Secret Garden, The Music Man, and The Sound of Music.[12] Bynes rose to prominence with her various roles in All That for seasons three through six. She later became a regular member of Nickelodeon's Figure It Out (1997-1999). At the age of 13, she began starring in her own sketch comedy show, The Amanda Show (1999-2002).[13] In 2002, Amanda began to establish her fan base with her debut film role in Big Fat Liar (2002) opposite Frankie Muniz, and a co-starring role in the WB sitcom What I Like About You (2002-06) with Jennie Garth, which gained positive reviews. She also made her voice-over debut in Charlotte's Web 2: Wilbur's Great Adventure and later in the animated comedy Robots (2005).[citation needed]

Amanda's film career took off over the next two years, with a role in the romantic comedy Lovewrecked (2005) and a starring role in the comedy She's The Man (2006). She also appeared on the cover of Vanity Fair's July 2003 edition.[14][15] Bynes was named one of Teen People's "25 Hottest Stars Under 25" in 2006.[16] Later that year, she starred in She's the Man, a comedy based on William Shakespeare's Twelfth Night.[17] Bynes appeared in another romantic comedy, Love Wrecked in 2005. That same year she filmed She's the Man which was released a year later in 2006.[18]

Bynes' next role was Penny Pingleton in Hairspray. The film was a critical and commercial success. Hairspray went on to become Amanda's most successful film at the time. Bynes was featured on the Hairspray soundtrack, which went on to get a Grammy nomination.[19] Bynes' next role was in another comedy, Sydney White, released on September 21, 2007.[20][21] In August 2007, Bynes teamed up with Steve & Barry's to create her own fashion line called Dear, consisting of apparel and accessories.[22] The line was cut short when Steve & Barry's filed Chapter 11 bankruptcy in 2008[23] and went out of business in January 2009. In 2008, Bynes appeared in the Lifetime Television movie Living Proof as the student assistant of Harry Connick, Jr.'s character.[24] Bynes was also originally set to star in the 2009 comedy Post Grad, but she was replaced by Alexis Bledel.[citation needed]

In June 2009, Bynes signed a two-picture deal with Screen Gems. The first of the two movies was the 2010 teen comedy Easy A, starring Emma Stone and Lisa Kudrow. The film was once again another critical and commercial success with many critics praising Bynes' role. The film after Easy A would have been a starring role.[25] Bynes also planned to reprise her role as Penny Pingleton in the sequel to Hairspray.[26] However, Hairspray 2 was canceled. Bynes was also originally set to star in the comedy Hall Pass but dropped out and was replaced by Alexandra Daddario.[27] Appearing on the cover of the February 2010 issue of Maxim magazine, highlighting her photo spread inside, Bynes stated: "I think every shot I did was sexy."[28] In July, Bynes announced an indefinite hiatus from acting.[1][29][30] During this time she studied fashion design at the Fashion Institute of Design & Merchandising in Irvine.[31]

In 2007, Bynes described herself as Jewish,[32] and also stated: "As far as religion, I was raised both. I learned about both Judaism and Catholicism. My parents said it was up to me to decide (which faith to adhere to) when I grew up. I'm sort of a spiritual person anyway. I haven't decided yet on a religion. I don't know yet exactly what I believe."[33]

Bynes is interested in illustration and fashion design.[14] She has previously had her own fashion line sold nationwide, and moved from Los Angeles to New York in order to facilitate her fashion career.[34] In 2008, Bynes briefly dated Seth MacFarlane after voicing a character in an episode of MacFarlane's show Family Guy.[35] In December 2013, Bynes enrolled at the Fashion Institute of Design & Merchandising in Irvine for 2014.[31] During an interview in June 2017, Bynes announced that she wanted to return to acting in an uncertain future but only in television.[6] It was announced in February 2018 that Bynes would be returning to acting later in the year, and that she is also graduating from fashion school during the summer.[36]

In 2012, Bynes was charged with driving under the influence (DUI) in West Hollywood.[37] Two years later, the charge was dropped and she received a three-year probation.[38] In May 2013, Bynes was charged with reckless endangerment and marijuana possession after she was found smoking in the lobby of her Manhattan apartment building.[39] When officers entered her 36th-floor apartment, she allegedly threw a bong out the window.[39] A New York County judge later dismissed the case against her in June 2014.[39]