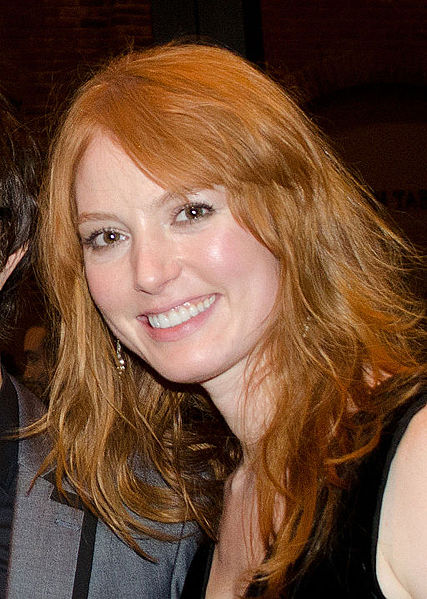 Alicia Roanne Witt (born August 21, 1975[1]) is an American actress, singer-songwriter, and pianist. She first came to fame as a child actress after being discovered by David Lynch, who cast her as Alia Atreides in his film Dune (1984) and in a guest role in his television series Twin Peaks (1990).

Witt later had a critically acclaimed role as a disturbed teenager in Fun (1994), and appeared as a music student in Mr. Holland's Opus (1995), and as a college coed in the horror film Urban Legend (1998). She then appeared in Cameron Crowe's Vanilla Sky (2001), Last Holiday (2006), and the thriller 88 Minutes (2007). Witt has made television appearances in The Walking Dead, The Sopranos, Nashville, Two and a Half Men, Friday Night Lights, Law & Order: Criminal Intent, Cybill, Justified, and Twin Peaks: The Return. In addition to acting, Witt has been described as a musical prodigy,[2] as an accomplished pianist, singer, and songwriter. She released her self-titled debut album in 2009. Witt has also appeared in ten Hallmark Channel movies.[3]

Witt was born on August 21, 1975,[citation needed] in Worcester, Massachusetts, to Diane (née Pietro), a junior high school reading teacher, and Robert Witt, a science teacher and photographer. She has a brother, Ian.[4][5][6] "Talking by age two and reading by the age of four,"[1] Witt has been described as a child prodigy.[2] Her acting talent was recognized by director David Lynch in 1980, when he heard her recite Shakespeare's Romeo and Juliet on the television show That's Incredible! at age five. He would begin working with her in film and television even before Witt earned her high school equivalency credential (at age 14[1]). She did undergraduate work in piano at Boston University[1] and competed nationally.[7]
Read more...

Witt's discovery by Lynch led to his casting of the "flame-haired" child in the movie Dune (1984)[1] as Paul Atreides's sister Alia; she turned eight during filming. She worked with Lynch again when she appeared in an episode of Twin Peaks,[1] playing the younger sister of Lara Flynn Boyle's character Donna.

These experiences led to Witt's having small parts in Mike Figgis's Liebestraum (1991), in which her brother Ian also appears, the Gen-X drama Bodies, Rest & Motion (1993), and the TV movie The Disappearance of Vonnie (1994). In 1994, Witt landed her first lead role in a film, playing a disturbed, murderous teenager in Fun,[1] and receiving the Special Jury Recognition Award at the Sundance Festival. Witt was then cast in the "desultory" Four Rooms,[1] as Madonna's lover in the episode, "The Missing Ingredient".

Witt was introduced to a larger audience in the role of Cybill Shepherd's daughter, Zoey Woodbine, in the sitcom Cybill.[1] While playing that part, from 1995 to 1998, she also had film roles in Stephen Herek's Mr. Holland's Opus, Alexander Payne's "delightful" satirical comedy Citizen Ruth,[1] Robert Allan Ackerman's Passion's Way (based on the Edith Wharton novel, The Reef), and Richard Sears' comedy Bongwater. After the Cybill series was cancelled, Witt went on to leading roles in Jamie Blanks' horror film Urban Legend (alongside "other nascently twinkling stars" Jared Leto, Joshua Jackson, and Rebecca Gayheart),[1] and in Kevin Altieri/Touchstone Pictures' limited-release animated feature, Gen¹³. In 2000, Witt had starring roles on episodes of the television shows Ally McBeal and The Sopranos, the lead role in the Matthew Huffman comedy Playing Mona Lisa (featuring Harvey Fierstein, Elliott Gould, and Marlo Thomas), and a "memorable" part in John Waters' "scathing satire" Cecil B. Demented.[1]

In 2003-04, she took up residence in the United Kingdom, though she portrayed Joan Allen's daughter in the US-based comic drama The Upside of Anger (with Kevin Costner, Keri Russell, Evan Rachel Wood, and others). Between these two projects, Witt went to South Africa to shoot a film interpretation of the epic poem "Das Nibelungenlied", played one of the central characters Kriemhild in the German TV movie Kingdom in Twilight (with title Dark Kingdom: The Dragon King in the U.S., and The Ring of the Nibelungs and The Sword of Xanten elsewhere).

Witt filmed the Last Holiday (2006) and the thriller 88 Minutes (2007, alongside Al Pacino[1]), and joined the cast of Law & Order: Criminal Intent for the 2007-2008 season. In the latter she played Detective Nola Falacci, a character temporarily replacing Megan Wheeler as Chris Noth's partner (otherwise played by Julianne Nicholson, who was away on maternity leave), and was a recurring character in the 2007-2008 season.[8] Witt appeared in the role of Amy in the film Peep World (2010).[1]

Witt appeared as the character Elaine Clayton in Cowgirls n' Angels (2012),[1] and in 2013 co-starred in the independent film Cold Turkey opposite Peter Bogdanovich and Cheryl Hines; there, she additionally performed an original musical piece over the end credits (see below). Her dramatic performance in this film was critically acclaimed,[9][10] with New York Magazine's David Edelstein proclaiming her turn one of the top performances of 2013.[11] Witt also appeared in four Christmas films in 2013: the feature film Tyler Perry's A Madea Christmas, A Snow Globe Christmas for Lifetime Channel, and A Very Merry Mix-Up for Hallmark Channel, and in 2014 Hallmark Channel's Christmas at Cartwright's.

Also in 2014, Witt appeared in a major guest starring role on the DirecTV series Kingdom,[12] which aired that October. Witt was a regular part of the cast of Justified in Season 5, which began airing in January 2014.[13] In April 2016, Witt appeared in two episodes of the hit series The Walking Dead;[14] the same month, it was announced that she would also be reprising her role as Gersten Hayward in the 2017 Twin Peaks series.[15] Witt filmed a major guest starring role on Season 12 of Supernatural as Lily Sunder, a former enemy of Castiel's, due to air in 2017.[16]

Witt made her stage debut in 2001, at Los Angeles' historic Tiffany Theater, in Robbie Fox's musical The Gift, in which she played a high-priced, though diseased, stripper.

While in residence in the U.K. in 2004, she starred as Evelyn in a stage production of Neil LaBute's The Shape of Things at the New Ambassadors Theatre.[17][18] In September 2006, Witt returned to the London stage at the Royal Court Theatre, in the critically well-received Piano/Forte, wherein she was "well-cast" in portraying the stammering, emotionally damaged pianist Abigail, sister to "unloved attention-seeker" Louise (Kelly Reilly).[19]

Witt performed alongside Amber Tamblyn in Neil LaBute's play, Reasons To Be Pretty, at the Geffen Playhouse, which ran until 31 August 2014. [20] [21]

In addition to acting, Witt is a professional singer-songwriter and pianist,[22] and is reported to have been a musical prodigy.[2] During her work with David Lynch, she supported herself by playing piano at the Beverly Wilshire Hotel.[7]

Responses to her 2006 stage portrayal of Abigail Piano/Forte included recognition of her skill as an "outstanding pianist" of "formidable skill".[23]

In 2009, Witt released her self-titled extended play album,[24] followed by Live At Rockwood in 2012[25] and Revisionary History in 2015.[26] In 2013, Witt and Ben Folds performed a song they had co-written on the soundtrack for the independent film Cold Turkey.

In August of 2018, Witt released a 5 song EP album entitled 15,000 Days (a reference to the length of time she had lived when she recorded the album) working with Grammy-winning producer Jacquire King.[27] [28]

On June 14, 2004, Witt modeled what is believed to be the most expensive hat ever made, for Christie's auction house in London. The Chapeau d'Amour, designed by Louis Mariette, is valued at $2.7 million (US) and is encrusted in diamonds.[29][30]