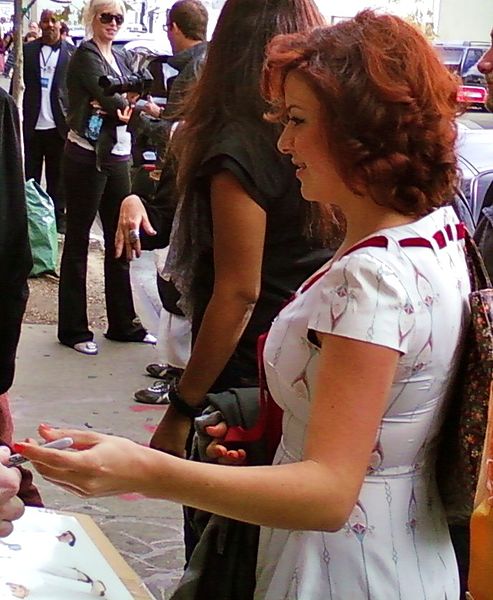 Shawkat was born in Riverside, California, to Dina Shawkat (née Burke) daughter of actor Paul Burke, and Tony Shawkat, a strip club owner. She grew up in Palm Springs.[4] She has two brothers.[5] Her father is Arab Iraqi, from Baghdad.[1][6] Her mother is of Norwegian, Irish, and Italian descent.[7]

When not acting, she likes to paint; she has participated in gallery shows in Los Angeles, Mexico City and Paris. She also likes to make music and sing in jazz bars.[2] Ever since the filming of Whip It, she has been best friends with fellow actress Ellen Page. She is bisexual.[8]

As Maeby Fünke, Shawkat was a regular cast member of Arrested Development for the entire run of the show from 2003 to 2018.[9] The series received nearly universally positive reviews, with Shawkat's performance occasionally singled out for praise. Pop-culture commentator Brian M. Palmer remarked that she was "one of the brightest lights on a show populated solely by bright lights,"[10] and Scott Weinberg of eFilmCritic described her as "one funny young lady."[11] In an interview with The A.V. Club in 2010, Shawkat remarked that many of her "formative moments" as an actress took place on the Arrested Development set: " Mitch Hurwitz was like a father figure to me. In a way, it was great to be around, because I feel that my understanding of comedy was able to grow really well during that time."[12]

In 2009, Shawkat appeared in Whip It co-star Har Mar Superstar's music video for "Tall Boy", which also featured Eva Mendes and Eric Wareheim. In October 2009, it was announced that Shawkat, Har Mar, and Whip It co-star Ellen Page would produce and write a show for HBO called Stitch N' Bitch.[12] According to The Hollywood Reporter, the show "follows two painfully cool hipster girls as they relocate from Brooklyn's Williamsburg neighborhood to Los Angeles' Silver Lake enclave in hopes of becoming artists—of any kind."[13]

Six years after the series was canceled by Fox, filming for a revived fourth season of Arrested Development began on August 7, 2012 and Shawkat reprised her role as Maeby Fünke. The season consists of 15 new episodes which debuted at the same time on Netflix on May 26, 2013. Each episode focuses on one particular character, with Shawkat's Maeby, now a high school senior, featured in episode 12, "Señoritis" and appearing in several other episodes of the season.

In 2015, Shawkat guest-starred on Broad City, portraying the romantic interest and look-alike of Ilana Glazer's character for one episode; the two were only attracted to one another due to their similar appearances. Leading up to the episode, many had remarked on the physical similarities Shawkat and Glazer bear to one another.[15]

Shawkat currently stars on the TBS comedy Search Party, which premiered on November 21, 2016.[16]