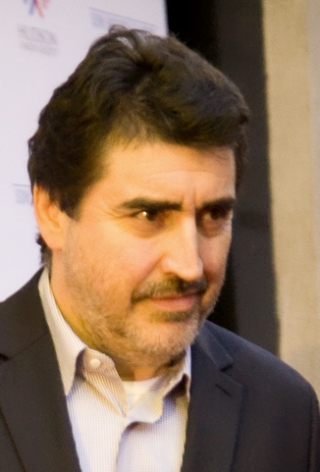 Molina rose to prominence on the West End, earning a Laurence Olivier Award for Best Newcomer in a Play nomination for his performance in the production of Oklahoma! in 1980. He made his Broadway debut as Yvan in a production of Art from 1998 to 1999. His other Broadway roles include Tevye in the musical Fiddler on the Roof from 2004 to 2005 and Mark Rothko in the play Red from 2009 to 2010.

For his performance as Robert Aldrich in the anthology television series Feud (2017), Molina was nominated for a Golden Globe Award and a Primetime Emmy Award.

Molina was born in Paddington, London. His father, Esteban Molina, was a Spanish immigrant from Madrid who worked as a waiter and chauffeur.[1] His mother, Giovanna (née Bonelli), was an Italian house-keeper who cleaned rooms in a hotel and worked as a cook.[2][3] Molina grew up in a working class district in Notting Hill[4] that was inhabited by many other immigrant families.[5] Molina decided to become an actor after seeing Spartacus at the age of nine, and attended the Guildhall School of Music and Drama.[6] He also auditioned and was accepted as a member of National Youth Theatre.
Read more...

Molina appeared with Leonard Rossiter in the sitcom The Losers (1978).[7] Molina made his film debut with a minor role in Raiders of the Lost Ark (1981) as Indiana Jones' ill-fated guide, Satipo, during its iconic opening sequence. However, his big break came with Letter to Brezhnev (1985), which he followed with a starring role in Prick Up Your Ears (1987), playing Joe Orton's lover (and eventual murderer) Kenneth Halliwell. He was originally cast as Arnold Rimmer in the TV sitcom Red Dwarf, but was replaced by Chris Barrie.

In the early 1990s, Molina was a ubiquitous presence on British television, with his highest profile role being the lead in the first two series of El C.I.D. Subsequent film roles included Species, Dudley Do-Right, Chocolat, Not Without My Daughter and Enchanted April. With a midwestern American accent, Molina starred alongside Betty White in the US television series Ladies Man, which ran from 1999-2001.

He has worked twice with Paul Thomas Anderson, first in Boogie Nights (1997) and then in Magnolia (1999). Molina gained wide recognition for his portrayal of Diego Rivera alongside Salma Hayek in the biopic Frida (2002), a role for which he gained BAFTA and SAG award nominations. He played himself alongside Steve Coogan in Coffee and Cigarettes (2003) and gained further commercial recognition when he portrayed the villain Doctor Octopus in Spider-Man 2 (2004), which became one of the highest-grossing films of that year. For the latter, Molina was nominated for a Satellite award as Best Supporting Actor. He reprised his role in the video game adaptation. In 2006, Molina portrayed Touchstone in Kenneth Branagh's film version of Shakespeare's As You Like It and appeared in Ron Howard's adaptation of The Da Vinci Code. Molina provided the voice of the villain Ares in the 2009 animated film Wonder Woman.[8]

Molina's stage work has included two major Royal National Theatre productions, Tennessee Williams' The Night of the Iguana (as Shannon) and David Mamet's Speed-the-Plow (as Fox). In his Broadway debut, Molina performed in Yasmina Reza's Tony Award-winning play 'Art', for which he received a Tony nomination in 1998. In 2004, Molina returned to the stage, starring as Tevye in the Broadway production of Fiddler on the Roof. For his performance he once again received a Tony Award nomination, this time for Best Actor in a Musical. Molina received his third Tony Award nomination for Red in 2010, for Best Performance by a Leading Actor in a Play.

In 2007, Molina narrated a 17-part original audiobook for Audible.com called The Chopin Manuscript. This serialized novel was written by a team of 15 best-selling thriller writers, including Jeffery Deaver, Lee Child, Joseph Finder and Lisa Scottoline. The novel won the 2008 Audiobook Of The Year Award form Audio Publishers Association.[9]

On 1 April 2010, he opened at Broadway's John Golden Theatre in the role of artist Mark Rothko in John Logan's drama Red opposite Eddie Redmayne for a limited engagement through 27 June.[10] He had played the role to much critical success at the Donmar Warehouse in London in December 2009 and revisited that role at the Wyndham's Theatre in the West End in 2018.[11]

He is one of only two actors (the other being Chris Pratt) to have three Lego Minifigures modelled after him, with them being Doctor Octopus from Spider-Man 2, Satipo from Raiders of the Lost Ark and Sheik Amar from Prince of Persia.[citation needed]

In July 2010, it was announced that Molina had joined the cast of Law & Order: LA as Deputy District Attorney Morales.[13] He previously guest-starred in a two-part crossover in 2005 in two other Law & Order franchise shows, Law & Order: Special Victims Unit and Law & Order: Trial by Jury.

Molina is a patron of the performing arts group Theatretrain. Molina is also a longtime member of the Los Angeles theatre company The New American Theatre, formerly known as Circus Theatricals, where he often teaches Shakespeare and Scene Study along with the company's artistic director Jack Stehlin.

Molina stated in an interview in 2013 that he owes his stage and film career to the Indiana Jones series. "I'm very, very proud of that, I have to admit I didn't think at the time, 'Oh, this is going to go down in movie history.' I'd never been in front of a camera before," Molina said about his short but memorable appearance in Raiders of the Lost Ark. Molina recalls getting the job as a "gift from God" and goes on to say "I've publicly thanked Steven many, many times. That job saved my bacon, in more ways than one." About his now famous line in the film Molina stated that "I've never had a problem with people coming up to me about it. They'll shout that line to me, 'Throw me the idol, I'll throw you the whip!' I'm delighted that people still remember it."[14]

He married actress Jill Gascoine in 1986 in Tower Hamlets, London.[15]

Molina resides in Los Angeles, California. In 2004, he announced that he had become a U.S. citizen.[16] He is fluent in English, Spanish and Italian. In 2017, he moved to La Cañada Flintridge.[17]

In addition to acting, Molina is an advocate for people with Acquired Immune Deficiency Syndrome (AIDS). He donates towards AIDS research, participates in the Los Angeles AIDS Walk and appeared as himself in a documentary produced by Joseph Kibler[18] (who has been HIV+ and paraplegic since his birth, c. 1989) about Kibler's life entitled Walk On, first screened in 2013.[19][20]